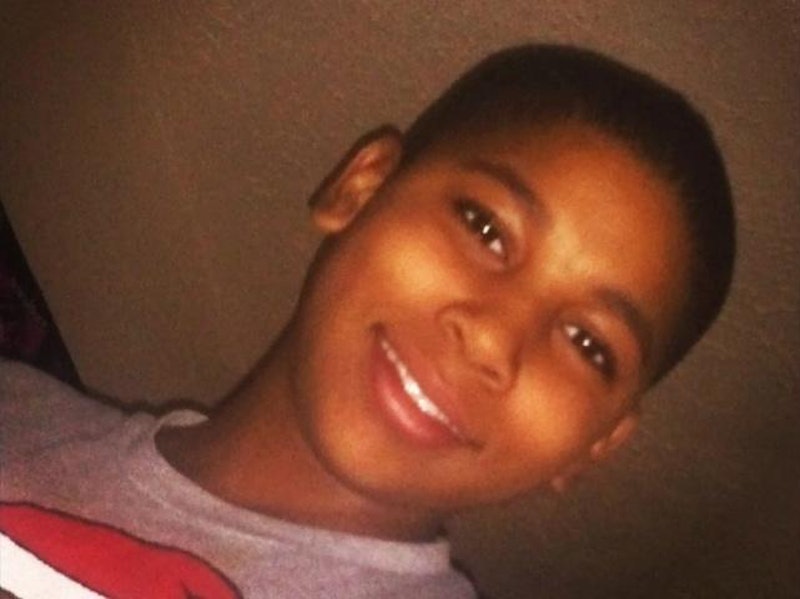 With the deaths of Ferguson teen Michael Brown and Staten Island man Eric Garner dominating the national attention, thanks to large-scale protests unfolding around different parts of the country, it's beginning to feel depressingly difficult to keep all the stories of controversial police shootings straight. But in Cleveland, there was a particularly awful example that took place last month — the shooting death of 12-year-old Tamir Rice. And on Monday, one of his parents finally broke their silence: Tamir Rice's mother wants a conviction of Timothy Loehmann, the Cleveland police officer who fatally shot her son.

Of course, it's been a hurdle lately even getting to the point of a trial. While the highest-profile incident of a slain, unarmed black teen in previous years ended in an acquittal — the killing of 17-year-old Trayvon Martin by George Zimmerman — when you're dealing with a police officer shooting, things can get a little strange. In the past few weeks we've seen two different grand juries return non-indictments in police shootings, in the Darren Wilson and Daniel Pantaleo cases, in spite of how incredibly rare that outcome is for members of the general public. According to FiveThirtyEight, out of 162,000 grand juries convened in 2010, only 11 failed to return indictments.

Rice's mother, Samaria Rice, spoke to an assemblage of reporters Monday about her son, and what's ahead for her family and their legal team.

Tamir was a bright child, he had a promising future, and he was very talented in all sports - soccer, basketball, football. He played the drums, he drew, he played video games, he's a great swimmer. ... He was my baby.

So, is a conviction possible? Or will the case even make it to trial? If you feel skeptical, well, that's pretty understandable. After all, a grand jury is being convened, and while the surveillance footage of Rice's death clearly raises deep and significant questions about the responding officers' conduct (as well as highlighting falsehoods in initial police accounts of the shooting), it's nowhere near as clear and overt as the video of the choking of Eric Garner was — again, a case that a grand jury decided didn't even deserve a trial.

In the days following the Rice shooting, more information has come to light that casts both Loehmann and the Cleveland Police Department in an extremely poor light. In Loehmann's case, the rookie officer resigned from a previous job with the Independence Police Department amid supervisor reports that he was "distracted and weepy" and "emotionally immature," according to CNN. The documents they obtained also alleged Loehmann had displayed "dangerous loss of composure during live range training," and an "inability to manage personal stress" — none of the qualities you want in an armed officer of the state, in other words.

Even further, an investigation into the CPD by the Justice Department has revealed significant, shocking instances of police misuse of force, ranging from inappropriately firing shots, to tasing a juvenile suspect already pinned to the ground, to repeatedly punching a handcuffed teen in the back of a police car (that last one sounds familiar).

Speaking to the media, Samaria Rice also voiced a new allegation, one sure to provoke questions and criticisms of the CPD — she alleges that police also tackled her 14-year-old daughter and handcuffed her after the pair had received news of the shooting, and insisted she'd be detained further unless she calmed down.

None of this is to say that a grand jury process will result in an indictment of Loehmann, let alone culminate in an actual conviction — both legally and in the eyes of prospective jurors, police officers get just about the most generous interpretations of justifiable force out there. But it's clear that Rice's family is going to fight this battle in spite of the futility and despair so many black Americans feel around this issue. And she's not hedging her expectations or desires for public consumption, either — not an arrest, or an indictment, but a conviction is what she's aiming for. For that zeal, at least, we should all be grateful.

More like this
The Families Of Grenfell Tower Are Still Waiting For Justice, Five Years On
By Bustle UK
Yinka Bokinni Recalls Terrifying Truth At Heart Of 'How To Hire A Hitman'
By Frances Stewart
5 Concrete Ways To Take Action Against The Rwanda Deportation Plan
By Rachel Mantock
Kimberly Jenkins Wants To Decolonize The Fashion Industry
By Dominique Norman
Get Even More From Bustle — Sign Up For The Newsletter