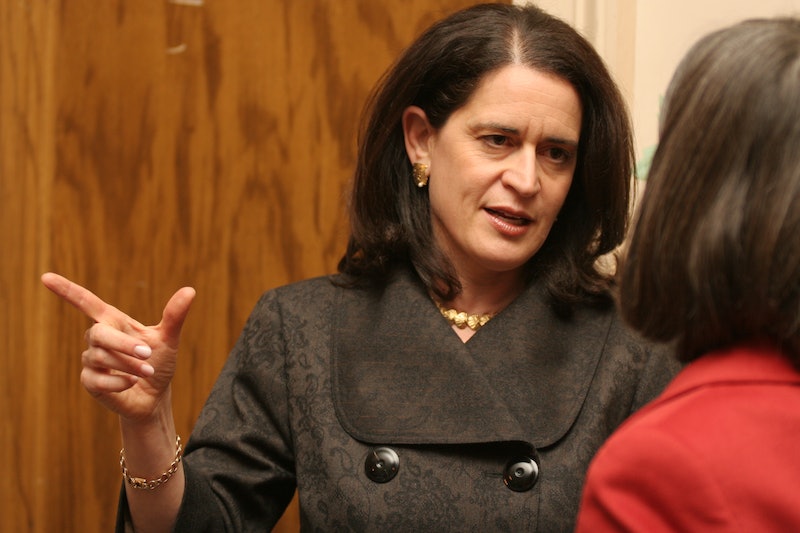 Debora Spar wants to help reframe the feminist agenda for the 21st century. To that end Spar, who is now president of the all-female Barnard College, has written Wonder Women: Sex, Power and the Quest for Perfection , drawing on her own experiences as a professor, wife and mother of three.

The book has been receiving a fair amount of attention, with both NPR and the New York Times interviewing Spar this week. In these interviews, Spar, 50, talks about how girls and women of the 1970s were bombarded with the image of an "effortless combination of work and motherhood and sexuality and professionalism and ease."

When the expectation that they could "have it all" came up against reality, many of them ended up disappointed, feeling like failures or feeling like feminism had failed them.

"I think what happened was that feminism was really a revolutionary movement, and like all revolutionary movements, it wasn't about personal satisfaction or personal success," Spar told NPR's Terry Gross. But "somewhere along the line ... the message of feminism got watered down and misinterpreted." It turned inward. It was drained of broader social goals—and this is what winds up driving women "nuts."

"If we set perfect and having it all as the standard, we're all gonna fail all the time," she said.

Today's young women face even greater pressure, because in addition to being competent professionals, good mothers, etc., we're also expected to be sexy and attractive at all times, Spar noted. Teens are pushed to pad their resumes starting in high-school; moms are guilted by the sustainable, organic, gluten-free movement.

So what can we do? According to Spar, the solution lies in feminists focusing less on personal fulfillment and more on societal issues — child care, pay equity, support for working moms and dads. Though Spar makes good points about feminism's history, I think this is where she starts to go wrong.

Oh, I don't mean that we shouldn't focus on these things (of course we should), but that we already are. And they're not just afterthoughts — social, political and cultural issues are at the top of young feminist agendas. Read any feminist blog or talk to any young feminist activist and you'll hear about pay equity, workplace policies, child care, rape prevention, reproductive rights, marriage equality and the representation of women in media.

Gen X and Y women have watched Spar's generation try — and fail — to be perfect leaders, employees, moms, wives, community members and everything else. If anything, I'd say we're way less duped by the myth of having it all. That doesn't mean we don't want both satisfying careers and a satisfying home life. We just know that it's going to involve tradeoffs. We don't think we can be "wonder women."

Perhaps I'm wrong here (far be it from me to speak for a whole generation of feminists). But it seems to me like Spar's book is written about and for boomer women. Today's culture at large may emphasize personal fulfillment more than in the past, but that's far from the main focus of 20- and 30-something feminists. Besides, there is room to worry about the personal and political at the same time.