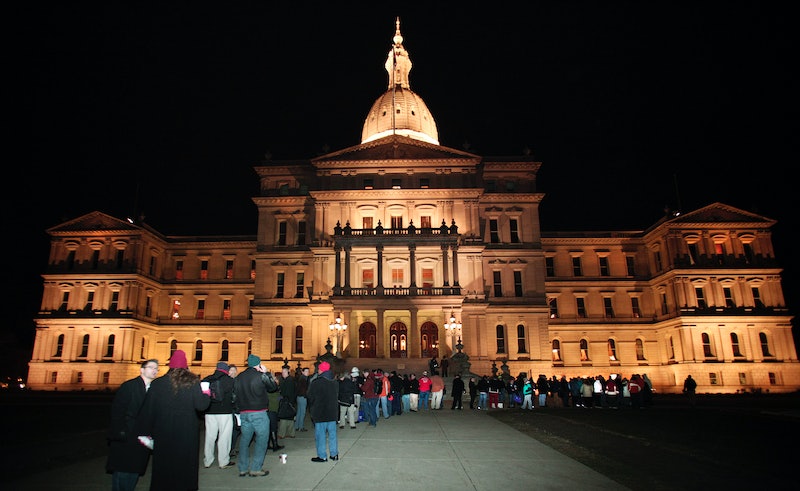 In another case of the opposite of the concept of separation of church and state — a grand idea that was pretty much this country's foundation — Michigan has passed a "religious freedom" bill last week that could serve a huge blow to civil liberties in the state. Courtesy of the GOP-controlled House of Representative, the bill would legalize discrimination against those in the LGBT community on religious grounds.

Known as the Religious Freedom and Restoration Act (RFRA) — or the more tedious HB 5958 — the bill is modeled after the Supreme Court's Hobby Lobby ruling that allowed certain corporations to exempt contraception coverage for their workers based on the owners' religious beliefs. Michigan's RFRA protects people from laws that conflict with their religious beliefs, unless in special situations, reported MSNBC.

The bill will be passed on to the Republican-controlled Senate, and if it goes through — which isn't unlikely — then await Governor Rick Snyder's signature.

So how significant is this bill for the average person in Michigan? While its sponsor, Michigan House Speaker Jase Bolger, claims it is meant to protect, say, a Muslim butcher who wants to keep his practices halal, the dangers of such bills are that an EMT in Michigan would be allowed to refuse treatment to a gay person, or a pharmacist refuse to refill HIV medication or birth control prescription because their religion decrees that homosexuals should be put to death. In fact, the bill is so broad that it would permit a school teacher to refuse to teach children of a same-sex couple, and enable a DMV clerk to deny a divorcee a driver's license, according to the New Civil Rights Movement.

Now, I am all for religious freedom, but there is a stark difference between holding your beliefs on your own accord versus imposing your personal ideologies on others. Bills like Michigan's RFRA are put into place to sanction discrimination against people, usually minorities — the very people Bolger claims it would protect. Touting the licensing of discrimination as "religious freedom" imposes a set of state-sanctioned restrictions on people who are merely trying to go about exercising their own forms of freedom.

A federal RFRA bill, introduced by Sen. Ted Kennedy, was signed into law by President Clinton in 1993 to protect religious minorities — something that Bolger pointed out as accusations of the bill's extremism pored in. To MSNBC, he said:

Do you think that Bill Clinton and Ted Kennedy were extremists? We modeled [this bill] directly after what they did. I’m baffled to hear that what we’re doing is out of line.

But just to show you the dangers of such laws, early this year, Governor Jan Brewer of Arizona — who is not exactly known for her camaraderie with the LGBT community — vetoed a similar bill that would license discrimination against gays and other groups on religious grounds. Citing the breadth of the bill, Gov. Brewer said that it could have:

Unintended and negative consequences [and it] has the potential to create more problems than it purports to solve.