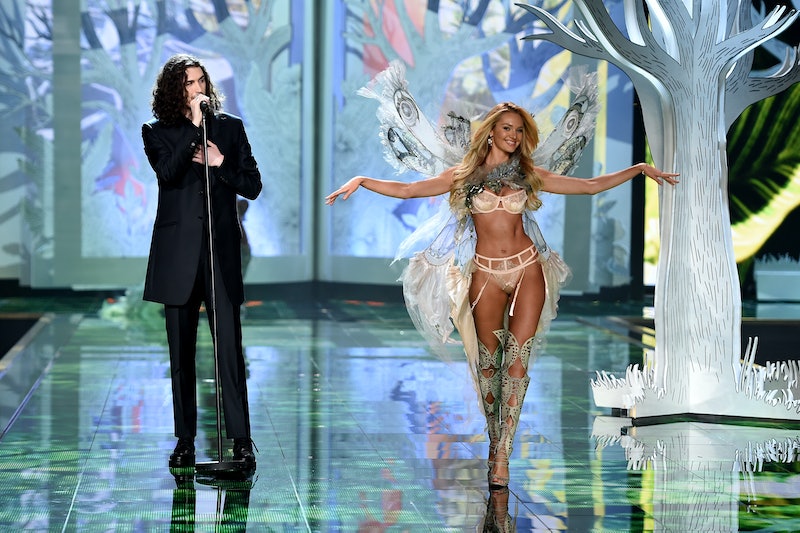 On Tuesday night, angels will descend from heaven and walk amongst us commoners. Along with the 48 models that will walk the runway, four other famous faces will take to the stage to add music to the event, among them Hozier. While the other names taking the stage that night will most likely be names you can't get enough of (Ariana Grande, honorary VS angel Taylor Swift, and Ed Sheeran), Hozier might be one name at the Victoria Secret Fashion Show you aren't completely familiar with. If you're not in the know on who Hozier is, now is the time to familiarize yourself, because this guy is going to be huge, and Victoria's Secret is just the beginning.

This isn't Hozier's first television appearance. Back in October, Hozier appeared as the musical guest on Saturday Night Live , and was truly incredible (it was also Bill Hader's episode, so unfortunately, Hader's return slightly overshadowed Hozier's presence). He also appeared on late night shows when his self-titled debut album came out in October. His single "Take Me To Church" has over 40 million views on YouTube — it's also an incredibly powerful video, I encourage you watch it — will be his song of the night on Victoria's Secret Fashion Show.

Hozier (who, for the record, is just one man, not a band like I thought for the longest time) is from Ireland, but has been making a splash in the U.S as of late. He was just recently nominated for a Grammy for "Song of the Year" for "Take Me To Church," up against Meghan Trainor's "All About That Bass," Sia's "Chandelier," Swift's "Shake It Off," and Sam Smith's "Stay With Me." While those are all pretty big names to compete against, "Take Me To Church" is currently the number one song streamed on Spotify, which could speak to his potential win on Feb. 8, 2015.

If you're looking to familiarize yourself with more of Hozier's music, check out his album Hozier on iTunes, which is comprised of 13 songs all together, some from his EP From Eden. And make sure to catch Hozier on the Victoria's Secret Fashion Show on Tuesday, Dec. 9. While it is always exciting to see Swift, Grande, and Sheeran perform live, having a newcomer like Hozier on stage is a great mix for the night, and sure to bring even more attention to his music and his growing popularity.