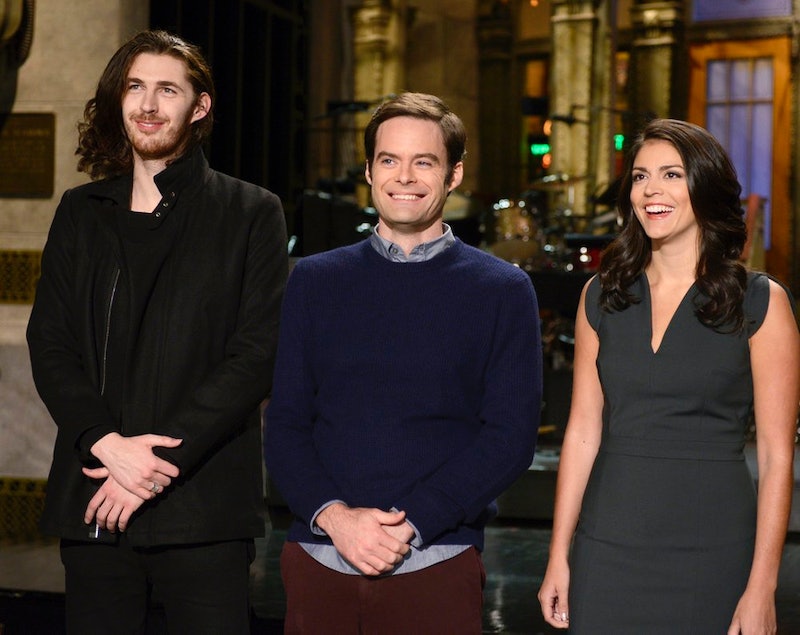 It was a huge for night on SNL for host Bill Hader and special guests. Alum of the show, Kristen Wiig, returned to have some fun with Hader and the current cast members, and Harvey Fierstein also made a small appearance in the monologue. And then there was Stefon's return to Weekend Update, and everything felt right in the world. But let us not forget about the extremely talented Hozier who was the musical guest of the night, because he was good, but just not as great as Hader and crew.

It almost seems unfair to compare the two. On one hand, you have Bill Hader, long time comedian and SNL alum, who brought back all of our favorite characters of his. First, there was the incredibly incompetent news reporter Herb Welch, and then the incredibly incompetent, but perfect in every sense of the word, Stefon. There was also Kristen Wiig, who played as one of her famous impressions, Kathy Lee Gifford, wino forever. Those are some big names, and even bigger characters to go up against.

And then there is Hozier, who is releasing his debut studio album this month. Hozier — who, for the record, is an individual musician, not a group — was absolutely incredible. He performed "Take Me To Church," an earlier hit, and "Angel Of Small Death & The Codeine Scene" flawlessly (I still get nervous artists are going to lip sync — Ashlee Simpson — or just flop on stage, but he was actually incredible). Check out his performances.

And while Hozier was incredible, I think it is safe to say that Hader and friends stole the show on Saturday night. Everyone was on point, all of the skits were comical — even the Cat in the Hat skit, and Bill Hader's presence was much needed after the first two weeks of the show were just OK. Bill Hader, don't leave us.