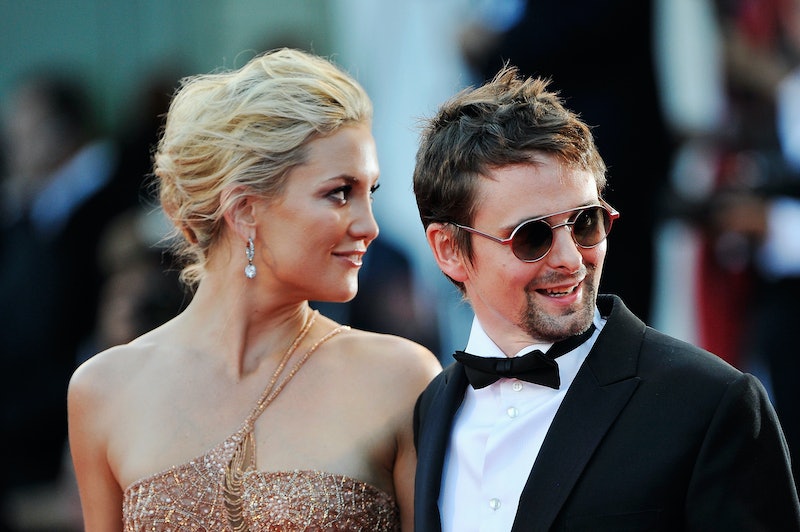 Is anyone keeping a running tally of all these celebrity couples shocking the world with their break ups? I thought I had seen it all after Nick Cannon and Mariah Carey announced their split, but apparently love is dying in Hollywood on an uncontrollable scale. Of course, these are the tearful words of a woman who was, perhaps, overly invested in the relationship between Kate Hudson and Matthew Bellamy, who have been dating since 2010 and engaged since 2011. They have a kid together, for heaven's sake! However, it's a sad but true fact that Hudson and Bellamy have called off their engagement — and apparently this has been going on for some time now.

According to E! Online, Bellamy's rep confirmed the news. "Kate and Matt have been separated for some time now. Despite this, they remain very close friends and committed co-parents." That's probably why no one saw this coming. After all, Hudson and Bellamy seem to be attending the same school of amicable divorcees as Gwyneth Paltrow and Chris Martin, not to mention Orlando Bloom and Miranda Kerr. They attended a red carpet event together and even had Thanksgiving plans with each other that, to the best of my knowledge, never fell through.

Despite that, The Huffington Post reports that there are rumors not all is bliss in amicable break-up paradise. "Kate doesn't ever want to get divorced again, and she wasn't sure marriage with Matt was the right choice," said a source to a website called X17, as reported by the Huffington Post. From this, the most hopeful side of me already has her fingers crossed that there might be a reunion in Hudson and Bellamy's future. Not being sure if getting married again is a good idea right now is a better reason for a split than simply falling out of love with someone, and Hudson (or Bellamy) might change their mind on not being ready in the future. Perhaps.

The couple have a 3 year old son together named Bingham and Hudson has a 10 year old son from a previous marriage named Ryder. At this point, all we can do is hope that the split between the two of them is as amicable as reported, if not for the sake of the children but at least for the sake of their relationship. The love between Bellamy and Hudson was obvious in every picture, every interview, and every sighting of the pair together — so discover that such a love could fade back into friendship is painful, but also just a fact of life, I suppose. At the very least, the two plan to continue to be good co-parents to Bingham, which is all that we can actually ask for.