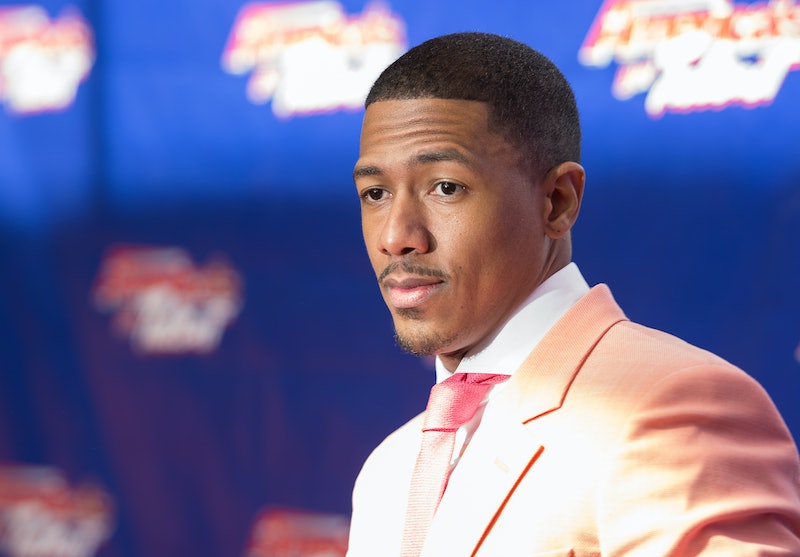 Could Nick Cannon be taking the high road on the way to emancipation from his marriage to Mariah Carey? Cannon made statements during a HuffPost live interview with Ricky Camilleri that sure make it seem that way. Instead of firing back at Carey, who sort of implied that Cannon cheated by way of a brow-raising lyric change, the America's Got Talent host expertly shifted the discussion away from his marital issues, simply declaring that "public opinion is the harshest thing about" the split. He continued, "If someone asks me a question, I know how to answer it. If I have to say, 'At this time I'd rather not say that,' or misdirect, it is what it is." That was a great response coming from Cannon, who's been guilty of oversharing details about his relationship in the past.

Thanks to the actor's cringe-worthy radio interviews, we know his soon-to-be ex has a rather shitty revolving door policy for potential nannies, and unfortunately, we're also privy to his previous celebrity sexcapades. Seriously, no one needed to know that he slept with Kim Kardashian, but sadly that little tidbit of info can never be unshared. And just when it became extremely obvious that he needed to refine his loose-lipped approach, Cannon unleashed a Twitter tirade that somehow managed to confirm and deny all the divorce rumors at the same time.

As Cannon told Camilleri, he's not one to stay silent, and that's understandable particularly when it comes to matters that concern his personal life.That said, if Cannon continues addressing all the divorce chatter in this mature manner, there might actually be a light at the end of the tunnel for what for so far, has felt like a less-than-amicable parting of the ways. This latest response shows that there's a post-it note on his mirror that reminds him of what will happen if he forgets about the terms of Carey's non-disclosure agreement, or he's actually learned from being too forthcoming about what goes on behind closed doors.