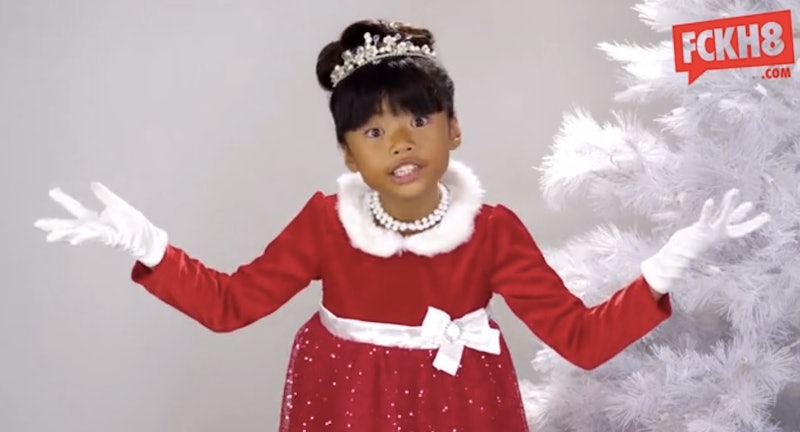 Guess who’s back, back again, Potty Mouth Princesses are back to talk about the wage gap, tell a friend. That’s right, your favorite princess-dress wearing, unabashedly swearing little feminists have returned for their latest video for FCKH8, this time with a very special guest (spoiler alert: it’s Santa). You might be wondering what Santa has to do with wage inequality. While the video is not an exposé on how female elves get paid less in the North Pole, it does use Christmas presents to give a visual component to gender inequality.

The Princess Posse takes on the gender pay gap, asking “How shitty would it be if Santa were as sexist as society?” and explores what would happen if we took the same approach to giving girls gifts as we did to paying women (like how we pay women drastically less than men). In addition to a special guest appearance from everyone's favorite jolly old man with a white beard (no, not you, Colonel Sanders), the video also features some choice Christmas puns, which made me ho ho ho.

I like the idea behind these videos but honestly I’m getting a little weary of the concept. I was down with the domestic violence video because they made a point to note that 100 percent of the profits from the T-shirts would be donated to domestic violence charities. But between the whole Christmas/gifts theme, and the really energetic “buy our shirts!” spiel at the end, I feel like the marketing ploy was a bit too blatant this time around. But maybe I’m just being a Grinch.

Even if you’re a little over the premise of young girls swearing for shock value to ultimately sell T-shirts, I promise the puns are a real tree-t. Plus, the girls' expert use of sass is cute enough to warm even the coal-dest of hearts. Are you collectively groaning yet? Watch the video or I will make more dad jokes!

More like this
What Is The Forest Personality Test? The TikTok Trend, Explained
By Georgina Lawton
22 Movies On Netflix That Are Perfect For The Whole Family
By Bustle Editors
Beyoncé & Madonna’s “Break My Soul” Remix Honors A Group Of Black Icons
By Stephanie Topacio Long
Your Daily Horoscope For August 10, 2022
By Mecca Woods
Get Even More From Bustle — Sign Up For The Newsletter