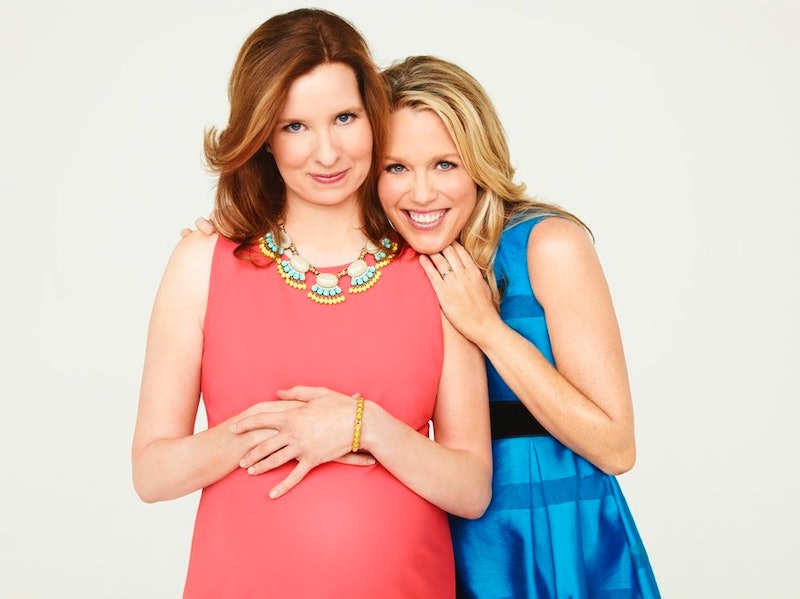 Rejoice! One of the best new comedies of this year, Playing House, just got the best news ever — and you can pinch yourself now, because I guarantee this is not just a very blissful dream. According to The Hollywood Reporter, Playing House has been renewed for season 2 by network USA, about 6 months after it aired its season 1 finale back in June. The waiting paid off, guys.

While the season 2 of the show — which will consist of 8 episodes — will be back on USA and air with a normal schedule, there will be a slight difference in how the episodes will be presented: Basically, viewers of the series will be able to watch episodes on an On Demand platform about a week before they're set to air on USA, a method that the network hopes will engage fans of the show in discussion about the episodes.

The series, which stars its actual creators, Jessica St. Clair and Lennon Parham, follows two besties who are raising a child together after one — the mother — finds out her husband is cheating on her. If you've never seen it, please do yourself a favor and watch it now, because it truly is amazing.

So, when will this newly revamped season 2 actually return to our lives? Though a specific date hasn't been set, new episodes are slated for the first half of 2015 — which, when you think about it, basically begins next month. Won't be long, now!

More like this
‘Squid Game’ Creator Hwang Dong-Hyuk Just Dropped A Major Season 2 Tease
By Brian Anthony Hernandez and Bustle Editors
'Stranger Things' Season 5 Will Echo Season 1 In A Key Way, The Duffer Brothers Confirm
By Kadin Burnett and Sophie McEvoy
Courteney Cox Doesn't Remember Filming 'Friends'
By Jordyn Tilchen and Sam Ramsden
Everything To Know About 'Westworld' Season 5
By Sophia Moore
Get Even More From Bustle — Sign Up For The Newsletter