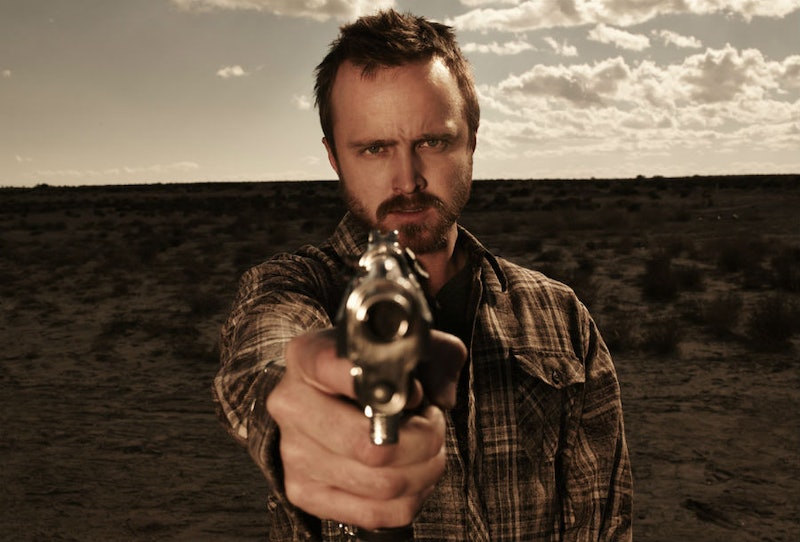 Breaking Bad has had no dearth of great characters from Hank Schraeder, the more complex-than-anticipated DEA agent, to Saul Goodman, the lawyer so beloved he's getting his own spin-off, to Skyler White, the powerful wife whose strength went unappreciated by fans for seasons upon seasons. But in the end, this story was always going to come down to Walt (Bryan Cranston) and Jesse (Aaron Paul). The only question that remains is: which one will live? Walt may be the one who knocks, but my money is on Jesse being the one who lives. Here's how I think it'll all go down.

Todd pulled a fast one on Walt in last week's "Ozymandias." We all knew his excuse to save Jesse was ridiculous: both DEA agents who knew anything about Walt or Lydia's operation are dead. Even if the authorities find their bodies, they won't have anything to tie Uncle Jack to the murders — you know those thugs' (definitely illegal) guns aren't registered anywhere. Todd's real motive was to make Jesse his own little meth monkey so he could keep the product blue and keep Lydia, his apparent object of whatever he has in place of affection, happy. Jesse will remain alive and working until the methylamine runs out. And Todd thinks he's got his own little shop set up, free of Walt and the DEA. Obviously, this cannot and will not stand.

Last we saw Walt, he was leaving town as a new man thanks to Saul's slate-wiper service. We know Walt lives to see his 52nd birthday, looking worse for the wear and hording guns in his trunk. That, however, cannot be the end of Walt and Jesse. It simply wouldn't be satisfying; Vince Gilligan has too much respect for our needs as loyal viewers, and there are two whole super-sized episodes left for something bigger to come along.

Walt, as we know, is not someone who lets things go. He's also not one to fully accept blame for the terrible things that have befallen him and his family — after all, he still sees his journey as an attempt to aid his family once his cancer takes hold. Now that he's lost his family completely and has only months to live, the likelihood that he'll be able to live a solitary life on the road without using his final days to exact revenge on the men he feels are responsible for the current state of his life is slim.

Walt is most definitely seeking revenge for Hank's death and his buckets o' money. What else is he going to do with his remaining months on his own? In an interview on Jimmy Kimmel Live! Paul said that the series about to get "messier," and if we know Walt, messy anger is his specialty. He'll seek out Todd, Uncle Jack, and likely even Lydia and be led to Jesse as a result.

STEP 2: HOW TO REACT TO JESSE NOT BEING DEAD

Of course, Walt will be horrified that Jesse isn't dead, as he commanded. In Walt's mind, Jesse is the reason Hank is gone. If you remember, Walt gave the immediate command to end Pinkman's life, right there in the desert. After all, Jesse is the reason Walt was in custody; Walt thinks Jesse's the reason he had to call in Uncle Jack and then failed to call him off; and ultimately, Walt sees Jesse as the reason Uncle Jack was in a position to shoot Hank and steal the money. That's why Walt makes sure to drive his own figurative knife into Jesse's heart before he's led away by telling Jesse he watched Jane die. If he can't see Jesse's life end, he can witness the light leave Jesse's eyes as he learns of the biggest betrayal in his life.

Walt's hatred for Jesse will likely be even greater, now that Hank's death (which is again, Jesse's fault in his mind) has led to the loss of his entire family and his home. While Heisenberg may have been broken enough to exonerate Skyler during their tapped phone conversation and broken further when Holly cried out "Mama" in a rest-stop bathroom, Walt is still the base for his alter ego.

Walt still believes that he's ultimately doing the right things and that other people and circumstances forced him into his dire straights. Walt's genius-level ego is so strong, that there is no way he thinks this mess is truly his fault. He may be able to feel the pain of his life choices with the full weight of human emotion, but Walt is practically incapable of accepting blame and guilt.

Suffice to say that when Walt eventually finds his way back to Jesse, the result will be caustic, unbearable, and more stirring than we can even conceive. And if Gilligan loves us (you do love us, don't you, Vince?) the epic moment will be saved for last, allowing the final moment of the series to belong solely to Walt and Jesse.

Now, before I go any further, please let me explain that this theory is just that: a theory. None of us really knows how this will end, and I respect the chemistry that runs Gilligan's laboratory of ideas to know that more likely than not, we'll all be surprised as the final episodes unfold.

However, as I see it, the only way for Breaking Bad to end is in complete, total, unrelenting tragedy. There can be no winner. There can be no one person who isn't broken by Heisenberg. Hank is dead; Marie is widowed; Skyler is left alone with her guilt; Holly is fatherless; Walt Jr.'s reality is shattered; Huell is still sitting in that motel alone. (Hey, this article needs comic relief as much as any episode of Breaking Bad does.) Walt's decisions must wreak irreparable damage on himself and on every single life he touches; and he's touched no life quite like he's touched Jesse's.

While the knee-jerk, human thing is to want Jesse to escape his enslavement, return to Brock and Andrea, and live a happy, normal life, the reality is that a normal life is never going to be possible for Jesse. The PTSD he'll be left with as a result of Todd's torture and slave labor alone would crush the humanity of any person, let alone someone who's endured the repeated mental torture that comes with being Walter White's sidekick. Our beloved Jesse will be this show's ultimate tragedy, and the most devastating fate would be one worse than death.

Walt, however, must die. If the culprit is not his cancer (which would be completely unsatisfying as his cellular assailant has been gunning for him from episode one) it will likely be a gun. And a bullet from anyone other than surrogate son whose life he decimated would hold little emotional power. Leaving the former Heisenberg to waste away with his thoughts would be a great punishment, but he doesn't exactly have an eternity left on Earth and there's one thing that would hurt him far more.

Consider the photo at the top of this article: a promo shot in which Jesse is aiming a gun at the camera. This is not a moment of badassery; his face is wrought with both conflict and determination. AMC has hinted at plot points (like Hank and Jesse's eventual collaboration) in promo pictures before, is it so impossible that this one is hinting too? Could Jesse be left holding a smoking gun at the very end?

Should Jesse be the last one standing and should he kill Walt, he will have given up; he will embody his greatest regret (killing Gale); he will be thoroughly ruined. Jesse Pinkman will have died, and all that will remain is a broken shell housing feeble breath. Allowing the complete ruination of the young man Walt once thought he could save would be the true and brutally fitting tragedy of Breaking Bad: If the series ends as Jesse pulls the trigger that he once couldn't, Walt will, in his final moments of life and television, be forced to look on his own works and despair.