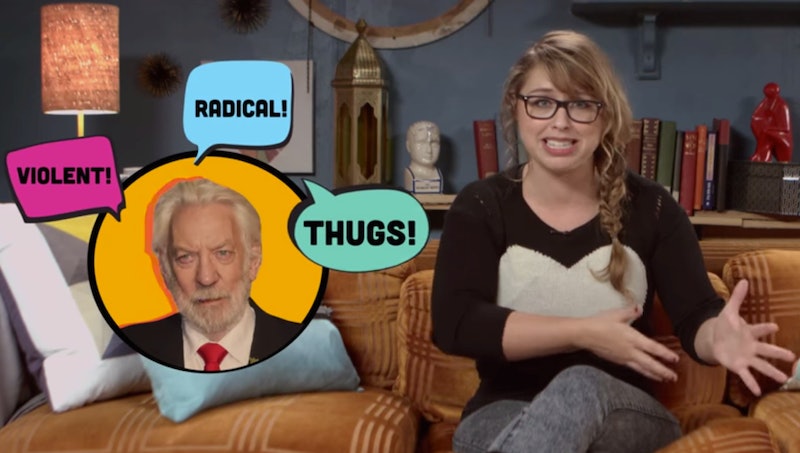 There have been a lot of problems with the way that the media has depicted the protests in Ferguson, particularly in the beginning, when coverage seemed to focus on rare incidents of rioting that took place during otherwise mass peaceful protesting. As a result, people who are not directly or indirectly involved in the protests do not have a very clear idea of the motivations or what the protesters are hoping to accomplish, a gap of understanding that is surprisingly well summed up in Laci Green's video comparing Ferguson riots to Mockingjay on MTV. While at first it seems ludicrous and even disrespectful to compare the real injustice displayed in Ferguson with the fictional injustice from The Hunger Games series, Green outlines a few genuinely clarifying points.

She starts out by comparing the biased media coverage of Ferguson to the way that President Snow decides that instead of calling the people of District 13 "rebels," he will call them "radicals" and depict them as violent and unstable in the press. In both cases, the depiction of protesters distracted from the real problem at hand—and, in the case of Ferguson, the very real incidents of police brutality without consequences.

Green also notes that the two groups "rise up against an authority that has abused its power," comparing the framing of the kids who participate in The Hunger Games as disposable to the way protestors in Ferguson point out that the police treat black lives as disposable, prompting them to carry signs displaying the words "Black Lives Matter." Even the imagery in the real and fictional protests sync up, with Green comparing the "Don't Shoot" gesture of Ferguson protestors to the three-finger salute in Mockingjay.

And Green isn't the only one who has drawn a comparison between reality and the dystopian film: Protesters in Ferguson have even adopted some of Mockingjay's quotes as a rallying cry:

Green also acknowledges in the video how non-peaceful protests are sometimes necessary to facilitate meaningful change, both by citing examples in our nation's history and in Mockingjay itself.

Of course, the comparison of these two phenomenons has generated a lot of controversy in the YouTube comments, but people are quick to point out that a video like this helps to frame the protests and put them into perspective for people whose idea of the Ferguson protests is unclear. It gives some people direct parallels to content from a movie that is readily available, familiar, and easy to understand. Hopefully a video like this will inspire people to act, because all of us can do something to help the protestors in Ferguson, and the protests taking place nationwide. Understanding the injustice is the key to getting involved in it, and if comparing it to a dystopian teen fiction novel is what it takes to make some people understand and step up to help, then it is a comparison worth making.

Here's the full video below: