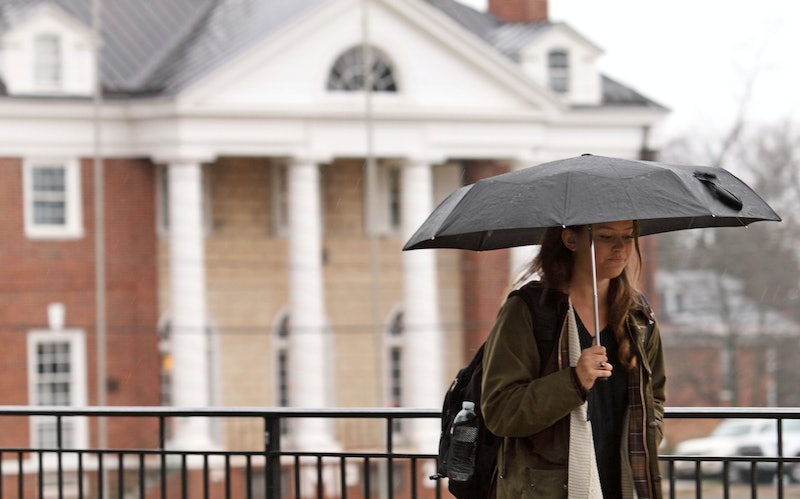 Yesterday, Bustle wrote about how University of Virginia students were supporting "Jackie," the embattled rape victim at the center of the quickly unraveling Rolling Stone exposé. But now the UVA story has gotten even stranger: Three UVA students profiled in Rolling Stone have challenged Jackie's story, claiming she used fake photos and names of her alleged attacker. However, all three students believe that despite the growing inconsistencies in the Rolling Stone account, Jackie was assaulted and traumatized that night in September 2012.

The Washington Post talked to Andy, Cindy, and Randall — the aliases of three UVA students who were friends with Jackie and reportedly came to her aid after her alleged assault. In Sabrina Rubin Erdley's story, "A Rape on Campus," these three friends reportedly found Jackie, who was bloody and beaten, outside the Phi Kappa Psi fraternity house sometime after 3 a.m. Erdley painted a bleak picture, describing an apathetic conversation that showed that the three friends cared more about their reputations within the Greek system than about Jackie's obvious trauma.

However, those three friends have disputed that conversation quoted in Erdley's piece. First, The Post claims the conversation took place shortly after 1 a.m., not 3 a.m. Andy also previously told The Post in an interview that he didn't meet Jackie near the Phi Kappa Psi house, but outside her dorm more than a mile away.

Now the three friends say that the conversation "didn’t happen that way at all." They also claim that Jackie may have been lying about the name of her attacker who, it turns out, wasn't a student at UVA.

According to The Post, the name Jackie gave to her three friends doesn't match anyone who was a student at UVA, and university officials have confirmed this. The three friends reportedly became curious about Jackie's potential love interest, named in the article as "Drew," when Jackie told them about an upperclassman in her chemistry class who had asked her out on a date.

The three friends told The Post that they received Drew's cell phone number and began texting him out of curiosity. The Post obtained some of these text messages:

Jackie also allegedly showed her friends pictures of Drew. The friends provided the pictures to The Post, who then identified the young man as a former high school classmate's of Jackie. He is not a UVA student, and hasn't seen Jackie in years. He told The Post he "never really spoke to her."

On Wednesday, Jackie's lawyer, Palma Pustilnik, released a statement requesting the media to give her privacy.

Jackie and her family have asked me to convey their request that all inquiries regarding statements, interviews, information, etc., in this matter be sent to me and that they not be contacted directly any more. She also thanked members of the media for using "sensitivity" when reporting on this story:

As I am sure you all can understand, all of this has been very stressful, overwhelming and retraumatizing for Jackie and her family. At this time, our position is still “No Comment.” If that should change, we have your contact information....

The last time Jackie spoke publicly, she said she stood by her story. Many of Jackie's friends, including her former roommate, have said they believe she was assaulted during her first year at UVA — and that regardless of the specific account in Rolling Stone, a traumatic assault definitely occurred.