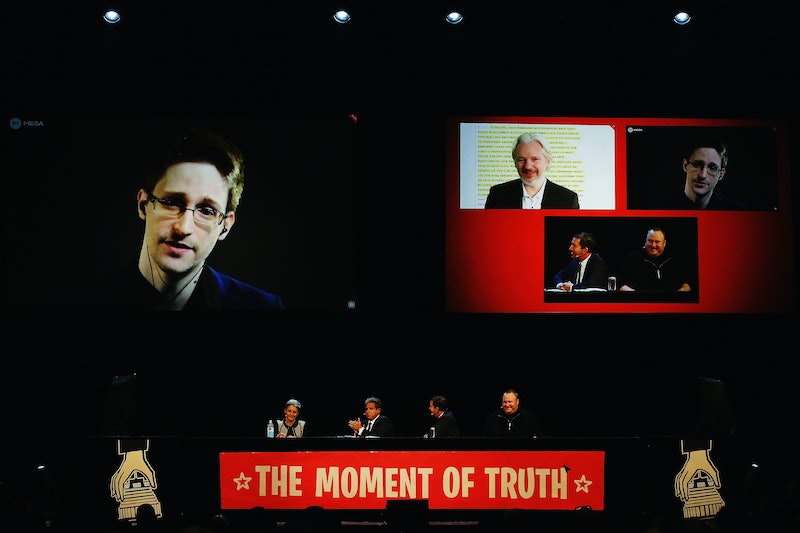 One former CIA agent has spoken out about the Senate Intelligence Committee's torture report, and you might have heard of him. During an Amnesty International event in Paris, whistle-blower Edward Snowden commented on the CIA torture report during a live video interview. The former NSA contractor and CIA agent says he was "deeply saddened" and "angered" by the 500-page account of the CIA's detention program that ran after 9/11, but what's even more disturbing for him is that no body has been held accountable.

He believes that allowing government operatives to get away with what he calls "serious crimes" undermines the moral authority of the United States and stunts us as a society, Snowden added.

The interview between the French Amnesty International members and Snowden, who answered questions from Moscow, opened with a glimpse into his life in the Russian city. He describes his life as "ordinary," saying that he rides the Moscow Underground "like everybody else." Snowden also mentions his work with "research communities, particularly the technical side of Internet standards" to discuss how to " improve the security for everyone around the world."

But the interview gets more heated when Snowden is asked about the recent CIA torture report, which has been the center of frenzied debate since it was released on Tuesday. The whistle-blower has strong feelings about the report, which he calls "extraordinary," particularly about the larger effects it may have on the international community.

It's not surprising that Snowden would take issue with the secret nature of the program, since he's basically a one-man campaign for government transparency. When discussing the NSA's mass surveillance program, Snowden remarked that when the government starts implementing large-scale policies without informing its people, they stop becoming partners of the government and start becoming subjects.

Individuals Need to Be Held Accountable

Snowden's main issue with the torture report, besides the unspeakable deeds that were performed, is that neither the interrogating officers nor the higher commanding officials are being held accountable, that the CIA is operating above the law.

I could not help but be deeply saddened and to a great extent angered by what we read. The things that we did as a result of this program are inexcusable crimes. And what we see that's quite dangerous with the United States debate ... is that proponents of the torture program are saying that even though there are international obligations to prosecute these crimes — because they are serious crimes [and] torture cannot be justified under international law — [they're not being prosecuted] on the basis of emergency circumstances or the orders of higher government officials. That does not excuse you from culpability of a crime.

As a country that has always touted itself as a moral leader in the world, America is quickly losing the moral high ground. By defying international standards set for torture and prosecuting torture, we are setting a precedent for countries much more prone to it. Basically, accountability is what separates us from North Korea.

This is deeply corrosive not just to the moral authority of the United States ... but the standard rule of law as applied around the world. If the United States can allow its officials to torture and not hold them to account, what does this mean for much more authoritarian states?

What Does This Mean For Our Society?

The fact that the U.S. ran a torture program, kept it secret, and is holding no one accountable is an alarming and sobering reality check for the country. And the details that the torture report revealed speak even worse for our society.

When we talk about what we saw in these programs.... Individuals actually lost their lives – they died – after being chained to a concrete floor in an unheated room, half naked. And rather than having the officer who ordered that behavior be prosecuted, he actually received a monetary bonus from the CIA of $2,500. These are things that leave a stain on the moral authority of the United States government. And if we do not prosecute them, investigate them and hold them to account, we cannot move forward as a society.

Where does the government go from here? If they can justify torture, then they can pretty much justify anything, and it won't be long before this mentality seeps into society and hits us closer to home. It not only loses us the moral high ground, it completely rips the it from underneath everyone in this country.

If we can argue that torture is justified ... because they have a positive effect ... what could we not justify? I mean, how different is torture in terms of the horror of the crime in regards to assault or rape? A government could say that rape has a positive effect because we have a declining demographic crisis in the country, therefore it helps us. Efficiency is not an argument for criminal behavior. Efficiency has no place in the debate about right and wrong of torture. And we must not accept efficiency as a justification for the criminal activity that occurred within the last decade.