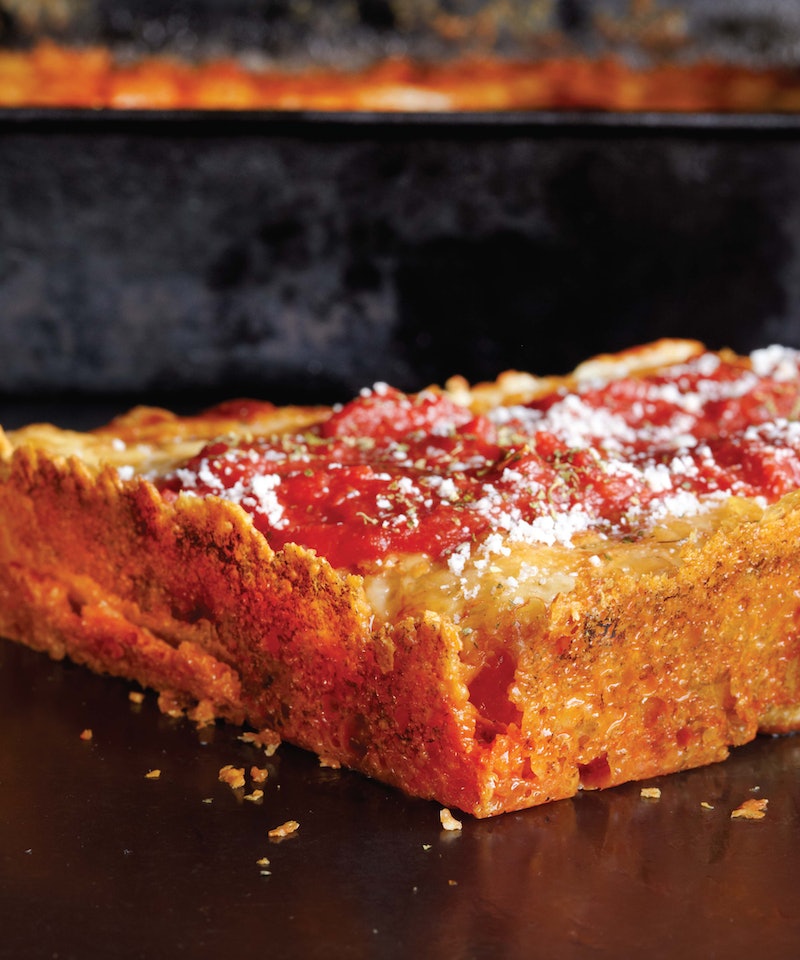 You can never go wrong with pizza — ever — but before you order another slice of good ol' plain cheese to go, take a second to consider your options. Because yes, perfection can be improved upon — just ask Pizza Bible author Tony Gemignani. His incredible guide to all things pizza is one of our must-have cookbooks of the year, full of recipes ranging from savory Chicago deep dish to traditional Neapolitan Margherita. Today, he's showing us how to make Detroit Red Top Pizza, a crispy golden regional pie you can sink your teeth into that's topped with TWO different cheeses, you guys. Look, your oven doesn't want to heat up another frozen pizza. It wants to heat up this culinary masterpiece instead. So get ready to make something incredible.

Check out the full recipe below, and for more inspiring ideas (including a super easy way to make drool-worthy garlic oil), check out Gemignani's Pizza Bible. We promise you won't regret it.

Detroit-style pizza was invented in the 1940s by Gus Guerra, the owner of Buddy’s Rendezvous. It’s rectangular, thick, and fluffy like a Sicilian pizza and is framed by a border of crispy golden brown cheese that tastes like the best part of a grilled cheese sandwich — the stuff that leaks out of the edge and gets toasted in the pan.

What makes this style unique are the two cheeses, white cheddar and brick, which are piled extra high up the sides of the pan to encourage that charred effect; the butter used to grease the pan; and the pan itself. Legend has it that Gus came up with the idea of using heavy, square blue-steel pans originally designed to clean the oil from tools in high-pressure gas ovens in factories. How Motor City is that?

Soon other Detroit pizzerias, like Shield’s and Cloverleaf, created their own versions.

In 2012, Detroit pizza got a major kickstart when Shawn Randazzo, a cofounder of the Detroit Style Pizza Company, entered the International Pizza Challenge with a Detroit take on the final blind box challenge (in which contestants are given a box filled with surprise ingredients). Most people hadn’t even heard of Detroit Pizza. I had tried it 15 years before, while I was shooting a television commercial for Dolly’s Pizza in Detroit, and I’d met Shawn when he attended my seminar the day before. Professionals with 30 years of experience were looking at Shawn’s pizza and saying, “What the heck is that?” I said, “The guy’s gonna win it.” And sure enough, he took first place that year.

The following year, Jeff Smokevitch, a former student of mine, won the American Pan division of the same competition with another Detroit-style pizza, and Detroit style has been the rising star of the pizza business ever since. Fortunately, Shawn is now selling Detroit pans (find the seasoned pan by Detroit Style Pizza at Detroitstylepizza.com), which had become increasingly difficult to find.

Remove the dough ball from the refrigerator and leave wrapped at room temperature until the dough warms to 50°F to 55°F. This should take about 1 hour.

Smear the butter in an 8-1/2 by 12-1/4-inch seasoned black-steel Detroit pan. Spread the oil over the butter.

Transfer the dough to the pan and flip the dough to coat both sides with the oil. Using your fingertips, push the dough outward into an even layer.

Try to reach the corners, but don’t worry if the dough does not fill the pan. Put the pan in a warm spot for 30 minutes, then push the dough again to fill the corners and to degas it.

Let the dough rest for 1 to 1-1/2 hours, until it has risen (the timing depends on the temperature of the room). It will not have doubled. If the dough shrinks away from the edges of the pan, do not press on the dough again or it may not rise properly.

Meanwhile, set up the oven with two pizza stones or baking steels and preheat to 500°F for 1 hour.

To make the sauce, combine all of the ingredients in a saucepan and puree with an immersion blender. Set aside.

Place the pizza pan on the top stone and bake for 6 minutes (the dough will set and be lightly colored). Remove from the oven, sprinkle the brick cheese evenly over the dough, covering to the edges. Stack 1-3/4 cups (170 grams) of the cheddar cheese around the edges of the dough; you want it to rise slightly up the sides of the pan. Sprinkle the remaining cheddar evenly over the top.

Return the pan to the top stone to bake for about 7 minutes. The pizza will be lightly colored and the cheese will be bubbling on the sides.

Rotate the pan 180 degrees and transfer it to the bottom stone. Continue to bake for another 8 to 9 minutes, until the cheese around the edges of the pan is charred. Meanwhile, heat the tomato sauce over medium-low heat until hot.

Remove the pan from the oven. Use a long metal spatula to chisel and loosen the sides of the pizza, then remove the pizza from the pan and place it on a cutting board.

Cut the pizza into quarters. Ladle 2 vertical racing strips of tomato sauce down the length of the pizza and spread it out slightly with the bottom of the ladle. Finish with a dusting of pecorino and oregano and a drizzle of garlic oil.

Put the yeast in a small bowl, add the warm water, and whisk vigorously for 30 seconds. The yeast should dissolve in the water and the mixture should foam. If it doesn’t and the yeast granules float, the yeast is “dead” and should be discarded. Begin again with a fresh amount of yeast and water.

Combine the flour and malt in the bowl of a stand mixer fitted with the dough hook.

With the mixer running on the lowest speed, pour in most of the ice water, reserving about 2 tablespoons, followed by the yeast-water mixture. Pour the reserved water into the yeast bowl, swirl it around to dislodge any bits of yeast stuck to the bowl, and add to the mixer.

Add the salt and mix on the lowest speed for 1 minute to combine.

Use a bowl scraper to transfer the dough to an unfloured work surface, then knead it for 2 to 3 minutes, until smooth. Cover the dough with a damp dish towel and let rest at room temperature for 60 minutes.