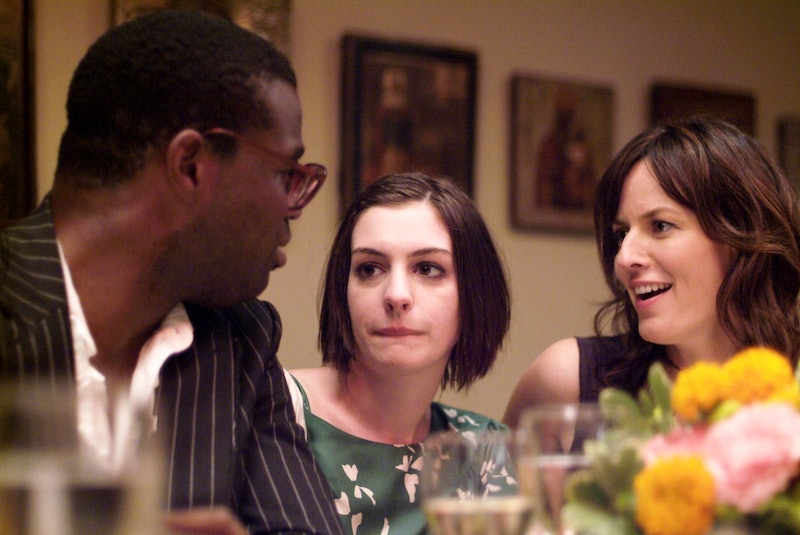 Long before I ever went on my first date, I was worried about the ways that my dysfunctional family might ruin my love life. It wasn't just that my mother was verbally abusive and frequently unhinged, or that my divorced parents kept getting back together, only to explosively split up again, every few months. It wasn't even that my extended family displayed all the warmth and rapport of a group of strangers stuck on an elevator together. It was that my mother herself told me that our rotten family would keep anyone from ever loving me.

Her words gave me a chip on my shoulder — I started dating early and obsessively, hellbent on proving to her that I could get a guy to love me. But even as my life took me far away from my mother, into the arms of men who barely knew that she existed, her words haunted me. Who would want to love someone from a rotten family, when there are so many other people from well-adjusted families that they could love instead? I later found out that I wasn't alone in this fear — a 2001 study of young adults from dysfunctional families found that most of the subjects felt anxious about dating, and had a harder time getting relationships off the ground. Lots of them seemed to just put off dating in general.

But in 2012, after a decade of working overtime to keep my family and my love life from colliding, I finally became embroiled in a situation with my mother that I couldn't hide from my boyfriend, Jesse. We had been dating for two years at the time, and though I loved him and felt close to him, I had only let him know a little bit about my grim childhood and strained familial relationships. I could not imagine any way that he could help me deal with my mother's problems, and also could not imagine that he could find out the full extent of them and not leave me. I knew I wouldn't blame him if he did.

But to my surprise, Jesse stayed. He helped me manage a complicated family situation that dragged out for months, and ended with my mother being hospitalized for emotional issues, and our eventual estrangement. Not only did his support keep me from cracking under the pressure of it all, but it actually brought us closer, and strengthened our relationship in ways I never thought possible. We now have one of those close, intimate relationships that I thought only people from "normal" families were allowed to have — and we have it because we tangled with my dysfunctional family, together.

So if you've been holding partners at arm's length because you think letting them know the truth about your family would destroy your relationship, let me share the three ways that letting my boyfriend know about my troubled family actually improved our life together.

Lots of children of dysfunctional families wander through life with the "conventional wisdom" about families and dating rotting our souls like mold in a dampened basement. "If you marry a family, not a person, and if you look at a woman's mother to see what she'll be like in 30 years," we think to ourselves, "what kind of chance could I possibly have to find anyone to love me?" This terror about how utterly unlovable and undateable your family history has made you colors everything you do in your love life, from how close you'll let lovers get, to whether you sabotage the relationship by doing dumb, hurtful things like cheating or lying.

But when Jesse saw me deal with my family problems, and stood by me, all of my ideas about love shifted. I was no longer afraid that he'd leave me if he got a glimpse of the world (and family) that I came from. My decisions about our relationship — like whether we could move in, or if I was comfortable letting him become friends with my friends —were no longer guided by worries about being revealed as an unlovable person. For the first time in my life, the part of my brain devoted to dating was focused on my partner, not fear about scaring my partner off. And every good thing I have in our relationship, two years later, is because of this.

All that said, children from dysfunctional families don't have a lock on being anxious about revealing their true selves in relationships. Almost all of us are a little nervous on some level about whether anyone can love the real us. And by the same token, just because you're from a dysfunctional family, doesn't mean that you have tons of empathy for everyone else's foibles — in fact, for years, I fixated on all of my boyfriends' small flaws obsessively, because I thought that was the only way I could exert enough control over the relationship to keep it together.

But after Jesse and I faced my problems together, I noticed that I cared less about small eccentricities that would have driven me crazy before. My obsession with his tiny bad habits or flaws (and those of all the guys before him) had just been my attempt to maintain a stranglehold on the relationship, because I believed that if I simply let our relationship and intimacy develop naturally, something would go wrong. I wasn't sure what, but it would probably have something to do with how inherently awful I was.

But after dealing with my family, I felt like Jesse and I had fully committed to accepting each other as messy, flawed human beings, which strengthened our relationship and improved every aspect of it, from sex to talking about financial issues. We no longer expected the other to be perfect, which in turn allowed us to let our guards down and get to really know each other as real, messed-up people in a way that I had never experienced before. I no longer think that I have to be perfect to be loved, or that he has to be perfect to show me that he loves me.

You'll Know For Sure That Your Partner Has Your Back

Before going through all this with Jesse, I never understood how people got married, or even lived together, and expected it to turn out okay. I felt grimly vindicated every time I heard that someone I knew was getting divorced —of course, what did they expect? — and strangely hurt and isolated every time someone I knew got engaged. I thought that there were only two possible options when it came to people committing for the long haul: either everyone else who did it was totally deluded and I knew something that they didn't; or I was a loser, someone who couldn't even fathom believing in that kind of love and trust and commitment. Maybe, I thought, there are people in life who get committed to and people who don't, and I'm one of latter type.

But watching Jesse stick with me through my estrangement with my mother helped me finally understand commitment. It's not that some people are commitment types and some people aren't — commitment is a thing you do, and a choice that you make, and it was choice that Jesse had made with me when he decided to see me through my dysfunctional family problems. And it was a choice I then made, in turn, to stick with him. Some relationships can't actually take your dysfunctional family problems. Some people that you thought were amazing partners whom you really had a future with will turn tail and run when they see the familial hand that fate has dealt you. These break-ups will hurt, because you'll feel like you're being punished for something that isn't your fault. But at the end of the day, you should be thankful for the folks that cut and run when they hear your back story, because they're not people that you can count on for the long haul. And those people, they are out there. There are people out there who will love you the way you need, and deserve, to be loved. And sometimes, you need a crisis to figure out exactly who they are.