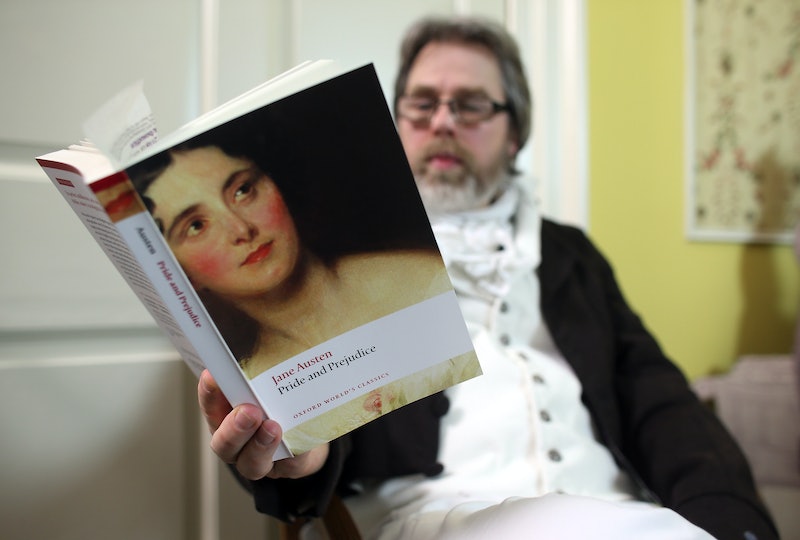 Janeites, rejoice! The Bath, U.K.-based Jane Austen Centre has declared December 16, Ms. Austen’s birthday, as the (unofficial) Jane Austen Day. The lit-loving society, which hosts a rollicking celebration of the Regency writer each year, is spreading the love across both the calendar and social media: the Jane Austen Centre's Facebook page urges Janeites all over the world to share their December 16 celebrations. (Need some Regency-era inspiration? Check out the Centre's online magazine, which offers a wealth of useful information, e.g. how to concoct a delightful lemon cream and how to properly wield a decorative parasol.)

Before you scoff at the irrelevance of such a niche, antiquated celebration, take a moment to consider Jane Austen’s lasting relevance. Sure, she may have been the staunchest-ever proponent of proper everything (she did, after all, avow the “universally acknowledged truth” of a wealthy man inevitably wanting ­— nay, needing — a wife). Not quite the most Millennial worldview.

But what Austen may lack in progressive feminism, she more than makes up for in her pure wit, in her devastating social observations, and in her enduring portraits of what it’s like to be young and in love. If that doesn’t cut it, here’s a list of 3 more reasons why the (modern) world deserves a Jane Austen Day.

Her searing social observations will still make you cringe, laugh, and swoon

Jane Austen is the unofficial heroine of the not-even-thinly-veiled shutdown. Take, for instance, her hilariously unflattering portrayal of spineless thief John Dashwood in Sense and Sensibility:

He was not an ill-disposed young man, unless to be rather cold-hearted and rather selfish is to be ill-disposed.

Or Mrs. Bennet's shrewish provincialism in Pride and Prejudice:

She was a woman of mean understanding, little information, and uncertain temper. When she was discontented, she fancied herself nervous. The business of her life was to get her daughters married; its solace was visiting and news.

Certainly we can all learn the value and power of not mincing our words from the keen Ms. Austen.

Those observations are still pithy (and relevant) enough to use on Twitter... or a cute mug

The surest way to class up your Twitter feed is to throw one of these gems into your usual mix of late-subway rants and Benedict Cumberbatch-fueled fangirling (just me?). Want to inject some of that stately Regency charm into your life and abode? Pick up a few of these cheeky trinkets. Who says Jane Austen has no place in the 2010s? (Mrs. Bennet White Ceramic Mug by StitchesintheLibrary, $15, etsy.com.)

Meanness and witticisms aside, Jane Austen had a real gift for portraying the strange violence of falling passionately in love. Like in Persuasion, in which our hero Frederick Wentworth goes heavy on the melodrama in his profession of love for our heroine, Anne Elliot:

You pierce my soul. I am half agony, half hope. Tell me not that I am too late, that such precious feelings are gone for ever. I offer myself to you again with a heart even more your own than when you almost broke it, eight years and a half ago…Too good, too excellent creature! You do us justice, indeed.

Not to mention that these swoon-worthy portrayals of chivalrous men have, through the magic of our obsessive media-hungry culture, resulted in several dashing Mr. Darcys. One for each brand of archetypal Hollywood handsomeness.

So... celebrate on Tuesday! We will be — don't you doubt it.

More like this
The 20 Best Audiobooks To Fall Asleep To
By Aoife Hanna and K.W. Colyard
'Doctor Strange 2' Star Benedict Cumberbatch’s Net Worth Is Not An Illusion
By Hugh McIntyre
Remember When Benedict Cumberbatch Announced His Engagement In A Newspaper Ad?
By Hugh McIntyre
Conversations With Friends' Endometriosis Scenes Are As Brutal As It Gets
By Ivana Rihter
Get Even More From Bustle — Sign Up For The Newsletter