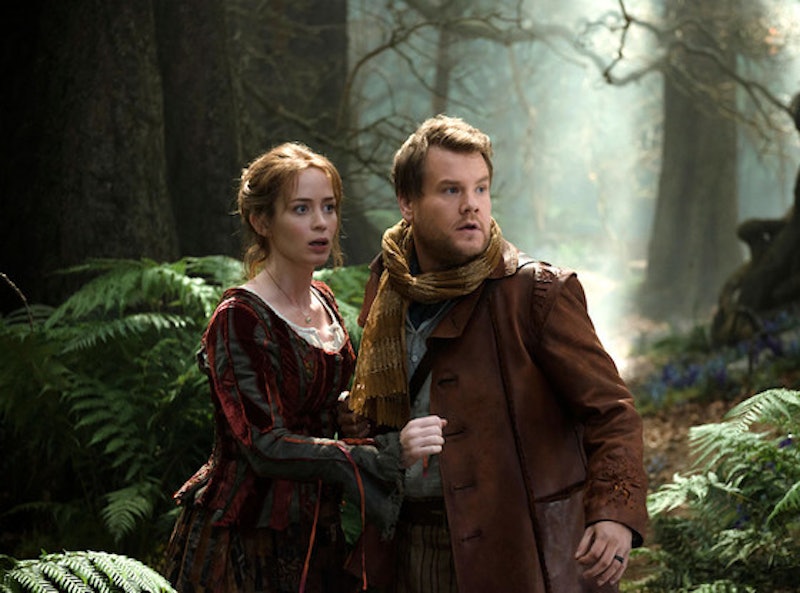 As theater geeks and movie-goers know, Emily Blunt's Into the Woods character, is unable to have a child, thus sending her and her husband on a plot-spawning path through the fairytale-ridden forests. Irony of ironies, though: Blunt was expecting a baby with real-life Jim Halpert AKA John Krasinski during filming. So how on earth did Into the Woods manage to hide Emily Blunt's pregnancy? Turns out she got by with a little help from her friends.

Into the Woods co-Star and Queen of Hollywood Meryl Streep attributed it to clever costuming and placement of Blunt's on-screen husband. "They were constantly placing James Corden in front of her belly, raising her apron higher and higher," Streep told Disney Twenty-Three.

Blunt also gives credit to the woman behind all the red hoods, glass slippers, and wolf zoot suits: "Colleen Atwood, who’s the most remarkable costume designer, as everybody knows, was so accommodating. I would say towards the end, every four or five days they were making some adjustments.”

The ultimate saving grace, though? Well, it didn't hurt that Into the Woods was filmed, well... in the woods. The enchanted forest scenery itself did it's part in masking her stomach, and Blunt swears she was "hiding behind every tree in the woods by the end of my pregnancy!"