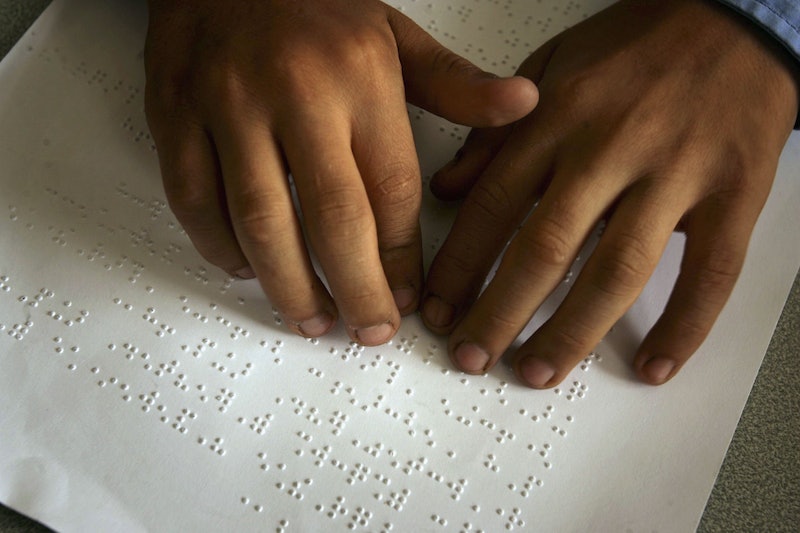 Braille: You’ve seen it, you've felt it, but unless you or someone close to you is visually impaired, you might not have thought much about it. I was one of those people — aware of the importance of braille for blind readers but without any real knowledge of how it works — until I spoke with Amber Pearcy, a proofreader at the National Braille Press in Boston.

The NBP’s mission is to support “a lifetime of opportunity for blind children through braille literacy, and [provide] access to information that empowers blind people to actively engage in work, family, and community affairs.” They produce books in braille, and can braille just about anything you can think of: menus, product manuals, plaques, magazines, business cards, and so on.

They also have a Center for Braille Innovation, which develops low-cost technology to improve access to braille and braille tools; on that note, they sponsor the Touch of Genius Prize for Innovation, a $20,000 reward for pioneering braille advancements. Overall, they work with businesses and individuals to create opportunities for the blind and visually impaired to participate in everyday life, from reading a restaurant menu to charging through the latest hit YA trilogy.

Talking to Pearcy — who was kind and clearly proud of the press’s work — was completely fascinating. Here’s what I learned:

Blind or visually impaired children learn to read braille “really the way any kid would learn to read,” Pearcy says, “just by first learning the alphabet.”

So, how does braille work?

Braille — invented in the 19th century by Louis Braille — are those raised dots you’ve seen on everything from direction signs to elevator buttons. Words are made using braille cells, combinations of six raised dots. Pearcy says “There are two levels of braille — grade 1 braille or uncontracted braille, which is where every letter is written by itself.

Grade 2 braille is known as contracted braille, and that’s where there is a series of signs or short forms to help condense braille. So, for example, if you take my name, Amber, you would write A M B and then there’s a sign for ER.”

When Pearcy was learning to read, she says that she and her teacher “started with uncontracted and moved on to contracted braille… It probably took me several years before I knew the whole code, but I was always on an equal reading level of my peers — I was pretty lucky, I had all my books in braille so I was able to participate fully.”

“I went to public school — my braille teacher worked for the school district and would travel to different schools throughout the day,” Pearcy says, adding that public schools are “pretty much required now by law to offer access to braille and any other accommodations that a student might need.”

Unfortunately, that doesn’t always mean the access is the best.

“Even in 2014, and certainly in the '90s when I was growing up, there is a disparity.… My school district was great and we had very knowledgeable braille teachers, but you could go one town over and the teacher may just barely be getting by as far as knowing braille herself.” There’s definitely hope, however, for educating future teachers; there are more and more master’s programs available for people who want to work with visually impaired students.

How are we doing with making public signs accessible to braille readers?

There’s still work to do, Pearcy says, and after our discussion I couldn’t stop noticing how right she is. Sometimes the omission of braille catches her by surprise: She told me a recent story about having to improvise after she discovered a hotel she was staying in by herself did not have braille on the room signs.

The accessibility of braille in public spaces is even worse for non-English speakers; though Spanish is the second most spoken language in America, Pearcy says that all public braille signs are in English. Numbers, of course, transcend language: “There’s not a separate system for numbers...and we have something called a number sign so you’ll see a specific symbol in front of anything that’s a number.”

Braille is not a language

“It’s just a way for people to read,” Pearcy says. “I think of it as an alternative format to print. It’s really inaccurate to call it a language because you can have braille in any language.” Consider it, instead, to be a code.

Braille is here to stay

Despite the ease and convenience that technological advancements afford, braille isn’t going anywhere. On the misconception that technology will replace the code, Pearcy says that audio “won’t ever replace braille because...you can’t tell anything about grammar by listening, you can’t learn how to spell words.… There’s always going to be a place for braille.”

That doesn’t mean braille is stuck in the past, though

The blind can still use e-readers, iPhones, iPads, and computers. “There are devices called refreshable braille displays,” Pearcy tells me. “They are made up of a bunch of little pins that pop up and form the different dots. I have one that I pair with my iPhone via Bluetooth.” The devices (seen above) are very expensive, though — “thousands of dollars" — and not typically covered under insurance (though Pearcy says that Europe and Australia are a little better about making the devices more available).

But thanks to the National Braille Press, that all will change soon

The NBP is working on the b2g, a refreshable braille computer that will cost far less than the current ones available. While this product is important for keeping up with today’s technology, it also will make a difference in braille readers’ ability to study and start careers in STEM — as of now, the NBP explains, “the blind do not have a device that can create a graph, bar chart, or tactile graphics.”

That’s not all the NBP does

Pearcy, who has been with the press for more than two years as a proofreader, explains that NBP advocates children’s reading. It has a number of programs which promote braille literacy, like Bumpy Basics and the Children’s Braille Book Club, and encourage families to introduce braille into their children’s lives as early as possible.

Their work is crucial

By brailling textbooks, bus schedules, and financial statements, the blind can fully engage in their community. Reading is a right, not a privilege, the NBP believes, and its initiatives, as they put it, open “the door to the universe.”

More like this
16 Novels That Paint A Realistic Portrait Of Abortion
By K.W. Colyard
At 14, Jenny Han Wrote Rom-Coms About Her Friends & Fan Mail To Leo DiCaprio
By Alyssa Lapid
Howard Stern's Net Worth: Is He The Richest Man In Radio?
By Hugh McIntyre
Aesop's Queer Library Is Open
By Tomi Otekunrin
Get Even More From Bustle — Sign Up For The Newsletter