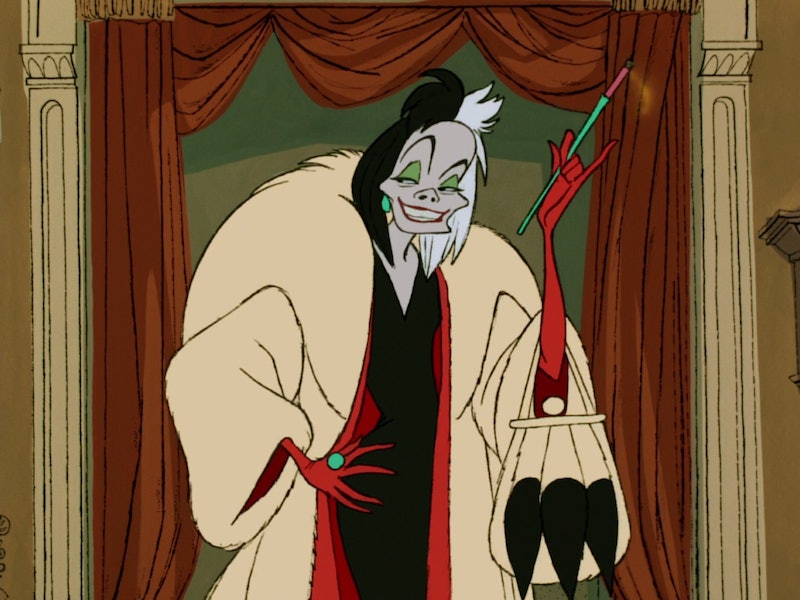 Things are about to get witchier in Storybrooke — at least, I think so. Ursula, Maleficent, and Cruella De Vil are coming to Once Upon A Time and the series' creators told TVLine, "in the Enchanted Forest, things gets classically evil as we face off against an embarrassment of witches." Does this mean that Cruella's a witch on Once Upon a Time? My original theory was that these witches were going to explode out of the sorcerer's hat along with everyone else who was trapped there. That may still be the case. It lines up with what the official ABC press release has to say about the winter finale, "an intrusion during Belle's stay at Rumplestiltskin's dark castle will wreak havoc in both the past and the future."

As creators Adam Horowitz and Edward Kitsis told Entertainment Weekly, the villains will be looking to change their story books and get their own happy endings. Welcome to Operation Mongoose, ladies! As far as magic? Here's what Horowitz and Kitsis told EW about the new origin of Cruella De Vil.

We’re going to realize that our Cruella may have originated from the Enchanted Forest, and we may find out she has some magic of her own. She’s part villain, part Zelda Fitzgerald. There’s something glamorous and jazz age, but something very deadly about her as well.

That sound absolutely thrilling. Plus, since Dr. Hopper owns Pongo, who will be the Anita to his Roger? Is ol' Jiminy getting a love interest? As for Cruella, this seems to confirm that she'll have magic — but what kind of magic? As we near the introduction of these "Queens of Darkness," I weighed the pros and cons of her having supernatural abilities of her own and what might she do with them.

Cruella De Vil is such an odd Disney villainess, if you think about it. In 101 Dalmatians she just wants to make a coat. She really hates puppies and loves polka dots and needs the furry pups to make her dreams come true. Perhaps, in Once Upon A Time's retelling of the story, Cruella needs the Dalmatian fur in order to complete a spell or a potion. In the original novel, Cruella was expelled from school for drinking ink. Isn't that interesting? We've seen a mix of magic and real life before with Little Bo Peep, Robin Hood, Blackbeard, and the show's interpretation of Frankenstein. Using the puppies for a magical end gives them some sort of purpose besides luxury and helps Cruella fit into OUAT's magical world.

On the other hand, what if Cruella really was a regular human? What if her magic isn't strictly magic, in the traditional sense? What if it's charm? What if it's manipulation? She could just be an aristocratic, snobbish psychopath with an impulsive temper that frightens everyone into submission. How cool would it be to show someone with so much power and sway in the Enchanted Forest without having to cast any curses whatsoever? I think that might be even more intimidating. Cruella De Vil always scared me most of all. We've seen Regina and Rumple go up against a host of villains who all wield different types of magic for different purposes. How chilling would it be to have their greatest enemy be someone who moves mountains by sheer force of will and cruelty?