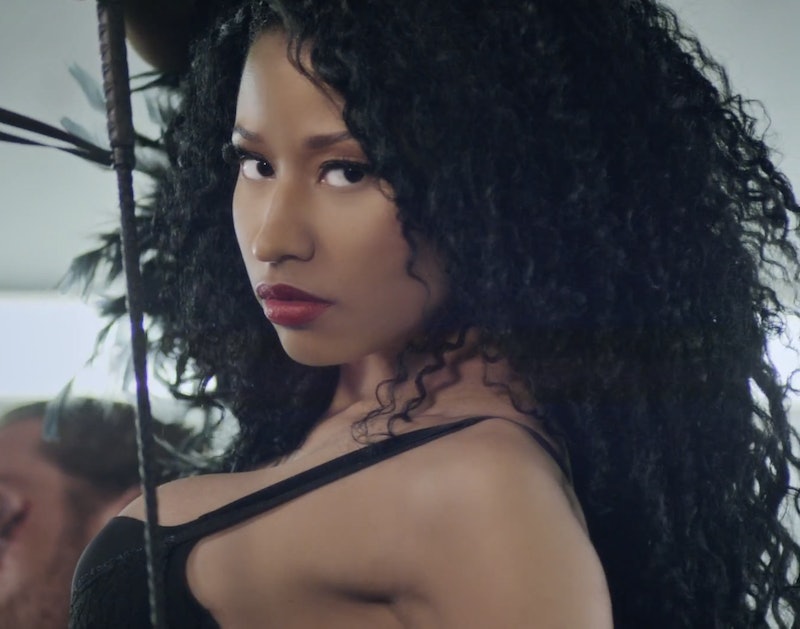 As much as I love Nicki Minaj, I was absolutely horrified by her single from The Pinkprint, "Only." No, I'm not talking about the lyric video for "Only," which was slammed for its use and glorification of Nazi imagery — although that was pretty horrifying in and of itself. Rather, I'm talking about the horrific amount of sexism present in the verses of Drake and Lil Wayne on the track, since they use their verses to discuss little more than the various ways in which they think all Minaj needs is sex and how they are more than happy to provide it at her earliest convenience. Yuck. However, when the "Only" music video was released Friday morning, the video made the song seem a lot better — or a lot worse, depending on how you want to view it. After watching it, there can be no doubt that Minaj was building to a definite point with "Only" and that point was a critical look at sexism.

In the video, Minaj portrays a dominatrix in what appears to be a warehouse of them. There are several awkward shots of bloodied and bruised men at the mercy of Minaj and her hive of women. Into that she power walks and begins her rap verse, highlighting her own sexuality and calling out critics and media moguls who have accused her of getting where she is by having sex with the men in her life. When Drake — and then Lil Wayne — come in for their verses, Minaj wears a mask and head covering that obscures most of her face, leaving only her body on display, as if to illustrate that she is being treated like a trophy for them to fight over and objectify, as if she has no image or voice of her own.

Intercut with flashes to the tied up and bruised men, it seems almost like Minaj is trying to visually illustrate that sexism doesn't just hurt her and her career — it's harmful to the patriarchy as well. One of the tenants of feminism is to highlight how harmful gender inequality is to males as well as females, and I don't think I'm being overly optimistic by saying that Minaj was trying to make that point with her video. Reducing her to a female rapper who could only have gotten where she is by using her sexuality to get ahead, rather than celebrating it as she often does, doesn't reflect well on the people making those accusations either — nor does treating her like she's nothing more than her much lauded assets.

Of course, it's dubious exactly how well Minaj pulls this point off, but "Only" is still an enjoyable video even if you're not reading a lot into it as I am. If you ignore the fact that Chris Brown is in it at all, it's very fun, if not vaguely uncomfortable to watch. Check out the video below.