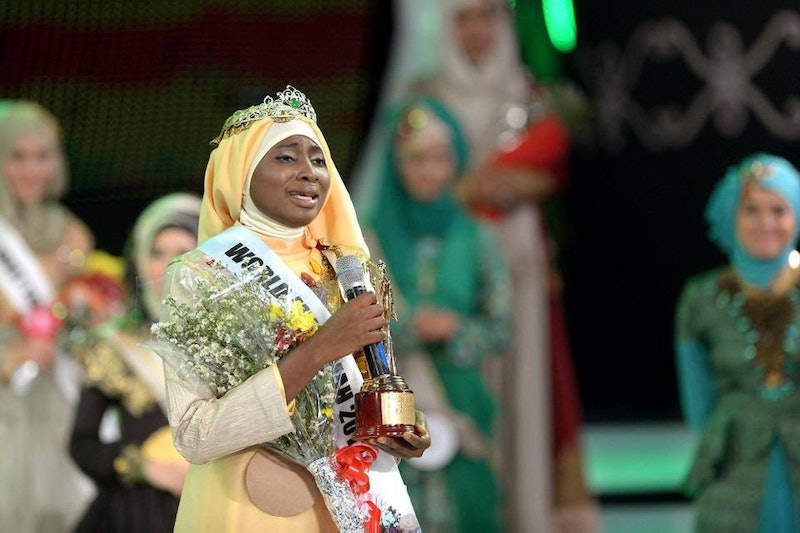 The 2013 Miss World pageant will be held next week in Indonesia, the world's most populous Islamic country. In response, Indonesian Muslim protesters have taken to the streets with signs reading “Miss World is whore contest” and “Miss World Go to Hell." But the World Muslimah Foundation (WMF), an organization devoted to helping and empowering Muslim women, decided to take a different approach: An alternative beauty pageant. The World Muslimah pageant, held Wednesday night in Jakarta, required women to dress in full hijab. Instead of a talent portion, they recited from the Koran and gave their views on Islam in the modern world.

Obabiyi Aishah Ajibola, from Lagos, Nigeria, was crowned the winner from a pool of more than 500 online contestants and 20 finalists (below). She'll be rewarded with 25 million rupiah ($2,200) and trips to Mecca and India.

“People think we are against Miss World," pageant founder Eka Shanti told the Christian Science Monitor. "What we’re against is nudity. For the sake of education, I want to give another example.”

Shanti said the event's central theme is "sholehah," an Islamic term that roughly translates to pious and moral. A few days before the pageant, Ajibola tweeted about the concept:

Though the first WMF beauty pageant was held in 2011, this year was the first time it was open to women outside Indonesia. The 2013 contest featured Muslim women from Bangladesh, Brunei, Indonesia, Iran, Malaysia and Nigeria, according to Channels TV. It was hosted by an Indonesian actress and pop star, Dewi Sandra, and featured both religious and pop music performances, including a song about modesty.

According to aMuslima.com, entrants were first judged on both their achievements and a short essay about their Hijab experience. "If you are a Muslim woman in full hijab with 18-27 years of age, have the ability to read Quran properly, have achievements in sports, academics, art, and culture [and are] willing to travel around the world for social, empowerment and education programs then you eligible to register," it noted in June 2013.