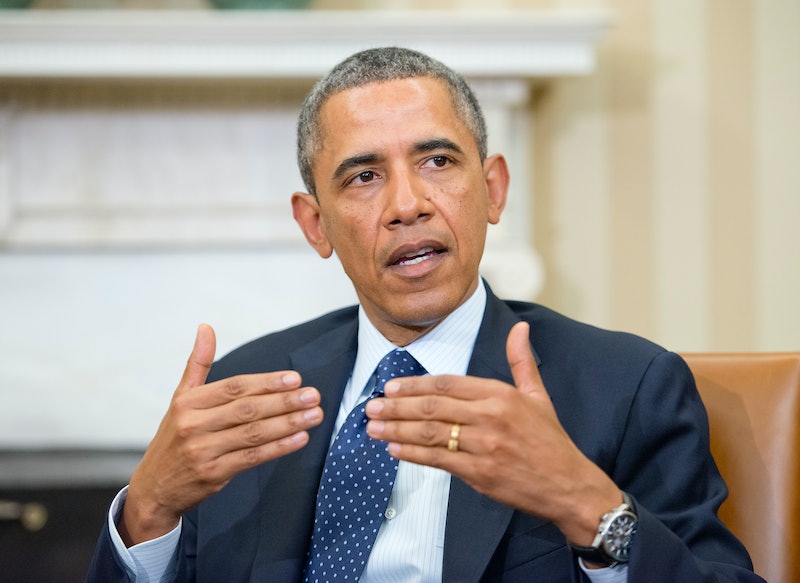 The high-profile and highly harrowing Ray Rice domestic violence incident has had a profound impact on national awareness of domestic violence. That's to say nothing of the impact it's had on the NFL culture, which has long been criticized for overlooking the scourge of domestic violence — anti-domestic violence PSAs featuring myriad NFL players (though created by an outside advocacy group, not the league) have generated a lot of buzz lately. And Friday, President Obama himself spoke out on the issue: Obama hopes the Ray Rice scandal's a "wake-up call" for the NFL, and for all institutions that don't have coherent procedures for combating and punishing such acts.

Of course, given the outsized exposure and impact of Rice's actions — he knocked his soon-to-be wife Janay unconscious in an elevator at an Atlantic City casino in February — it's proven to be something of a wake-up call for the nation, as well. A chance for all of us all to grapple honestly both with the pervasiveness of domestic violence, and how easily so many people have turned their backs to the crisis. I saw this up close when attending Thanksgiving with my extended family this year — the airing of those aforementioned PSAs had some people commenting on the PSAs' awkwardness and potential to cause discomfort, which is exactly the point they strive to make.

Obama was speaking to ESPN's Colin Cowherd Friday, in a series of interviews to promote the Affordable Care Act — open enrollment for next year runs through Feb. 15, mind you — when the subject turned to the NFL and their undeniably disastrous handling of the Rice incident.

Obviously the situation that happened in the Rice family was unfortunate, but it did lift up awareness that this is a real problem. The way it was handled also indicates that the NFL was behind the curve, as a lot of institutions have been behind the curve, in sending a clear message. You don't want to be winging it when something like this happens. You want to have clear policies in place. The fact that policies have now been established, I think, will be helpful in sending a message that there's no place for that kind of behavior in society, whether it's in sports, or anyplace else.

As NBC News' Carrie Dann noted, the President's commentary of social and political issues in sports wasn't limited just to Rice, however — he also commented on the surge of athletes embracing their platforms for activism, with numerous NBA players donning "I Can't Breathe" shirts in honor of Eric Garner, the unarmed black man who was choked and killed by NYPD police officer Daniel Pantaleo in July. Pantaleo was not indicted by a grand jury, sparking widespread and dramatic protests.

When you think about some of our greatest sports heroes - Mohammed Ali, Bill Russell, Arthur Ashe - they spoke out on issues that mattered at pretty critical times. There's times where there are important issues out there, and for athletes to recognize that they're citizens as well as entertainers and they've got a voice that's legitimate, I think is important. I think it's useful.

More like this
How To Support Gun Control Reform Right Now
By Morgan Brinlee and Carolyn Steber
Chelsea Woody On Shattering Stereotypes In Surfing
By Leah Groth
Are Tom Daley & Louis Theroux Bound For 'Strictly'?
By El Hunt
Marcus Rashford Took Inspo From Kravis For His Adorable Proposal To Girlfriend Lucia Loi
By Frances Stewart
Get Even More From Bustle — Sign Up For The Newsletter