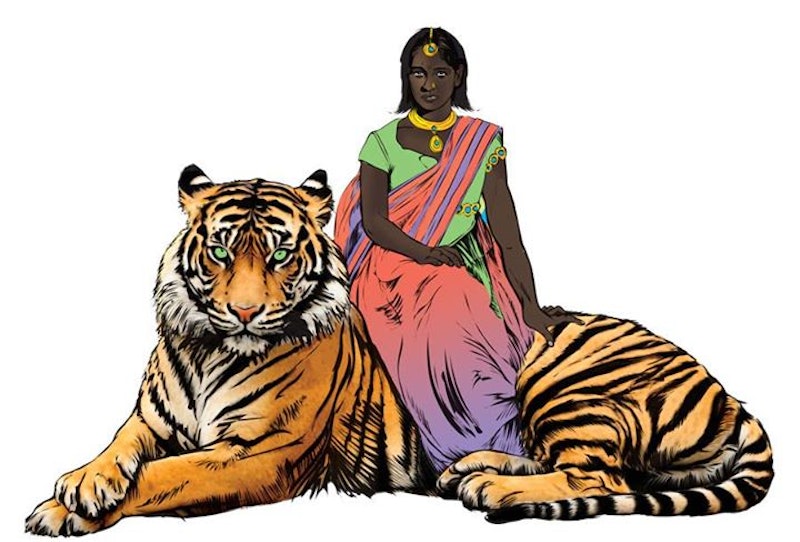 A new Indian comic book is making waves for featuring a character named Priya Shakti, a rape survivor and gender-based sexual violence fighter who rails against misogyny alongside the Goddess Parvati. Needles to say, I am psyched that this character exists.

Priya's character was inspired by the 2012 gang rape that happened on a bus in India and seeks to create a narrative based on Hindu culture that would resonate both with Indian audiences and people around the world. The comic book was created as a collaboration between Ram Devineni, Lina Srivastava, and Dan Goldman who directed, produced, co-wrote, and designed the comic book. It can be downloaded for free on the website.

The comic world has recently seen a slight upswing in much-needed diverse characters with characters like Priya Shakti and Marvel's 15 year old Pakistani-American superhero, instead of the traditional white protagonists we usually see. Not only is Priya's character one that reflects diversity in terms of race and ethnicity, but also in the cause she's fighting for. The comic book's website gives a brief synopsis of her story:

The storyline focuses on Priya, a human woman and ardent devotee of the Goddess Parvati who has experienced a brutal rape and the social stigma and isolation resulting from it. The Goddess Parvati is horrified to learn about the sexual violence that women on Earth face on a daily basis and is determined to change this disturbing reality. Inspired by the Goddess, Priya breaks her silence. She sings a message of women’s empowerment that enraptures thousands and moves them to take action against GBV around the world.

Follow the hashtag #StandWithPriya and check out some awesome promotional material here before downloading a free e-copy of the book.

More like this
'Indian Matchmaking's First British Cast Member Knows *Exactly* What She Wants
By Shahed Ezaydi
The Biggest Differences Between 'Bullet Train' & The Book It’s Based On
By Arya Roshanian
15 Matching Halloween Costumes For You & Your Dog
By Kirsten Nunez
Your Daily Horoscope For August 19, 2022
By Alexandria Lettman
Get Even More From Bustle — Sign Up For The Newsletter