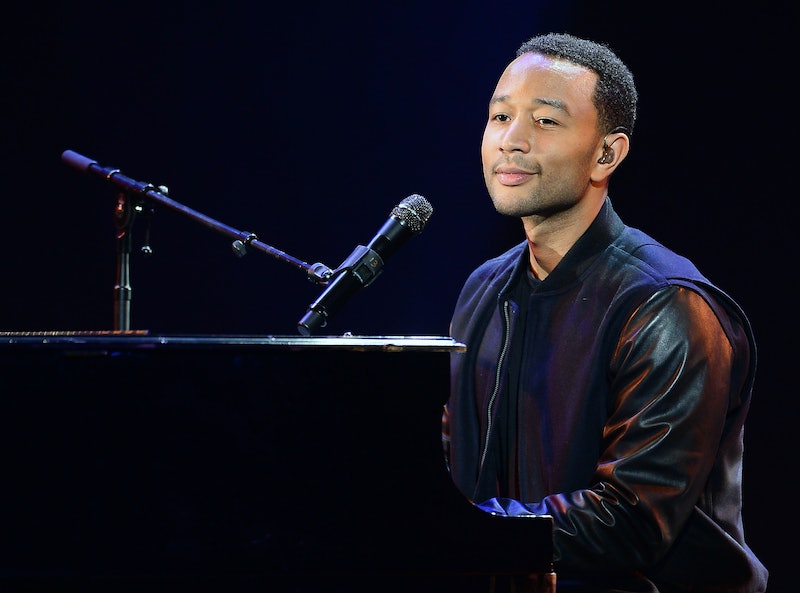 After the double whammy of no-indictment verdicts for two police officers who killed unarmed black men in the past month, the outpour of rage and grief across the country has seen protests erupt in many cities as people came out in forces demanding justice and equality. Many public figures have joined in the heavy criticism directed toward the justice system, and on Friday, singer John Legend published an op-ed in Billboard demanding change.

One of the more outspoken critics of the grand juries' decisions, Legend wrote that watching Selma, the historical drama film about the African-American Civil Rights Movement, the roiling protests taking place today felt "eerily the same." While the musician acknowledged the racial progress since those tumultuous times, he also highlighted that the country is "far from [Martin Luther King Jr.'s] dream of equality and justice for all."

Although slavery ended 150 years ago, he noted, the structures of racism have proven difficult to tear down. Legend pointed out the wealth gap, voting restrictions, an education system that failed to provide equal opportunity, and the most pressing matter of all — a broken criminal justice system. He wrote:

African-American communities are being crushed by a criminal justice system that over-polices us, over-arrests us, over-incarcerates us and disproportionately takes the lives of our unarmed youth because of the simple fact that our skin, our blackness, conjures the myth of a hyper-violent negro.

Legend's involvement in politics have seen him collaborate with the Roots on their 2010 album, "Wake Up!" featuring politically charged soul songs. Together with rapper Common, they composed the song "Glory" for the movie Selma. The crooner has been outspoken about his political views on Twitter before, from the Israeli-Palestinian conflict to health care and gun control, but he wrote in Billboard that although social media platforms give celebrities today direct, unprecedented access to fans, there's still urgent need for real action:

Today, I am part of a generation of artists who benefit from unprecedented access to our fans... Yet our actions, or lack thereof, speak louder: 140 characters cannot excuse us of our obligation to stand up, sit in or march forward.

Having previously been a vocal supporter of President Obama — he wrote an Obama-inspired song that he debuted at the Democratic National Convention in 2008 — Legend took to his op-ed to criticize the president for his public reluctance to step up in the wake of the Eric Garner and Michael Brown verdicts. He wrote:

Obama recently told the young activists gathered in the Oval Office to "think big, but go gradual." His words reminded me of President Lyndon B. Johnson's reluctance to tackle voting rights, as depicted in Selma... We can’t wait for gradual and incremental change. Our government is a democracy, by the people and for the people. It is time for the people to wake up, stand up and demand change.

Despite having a black president in the White House and the general advancements of societal values as a whole, the unfortunate truth is that minorities continue to be disproportionately discriminated against — and by state-sanctioned systems, no less. To hear Legend describe it, it doesn't seem as though the times have changed all too much in America.