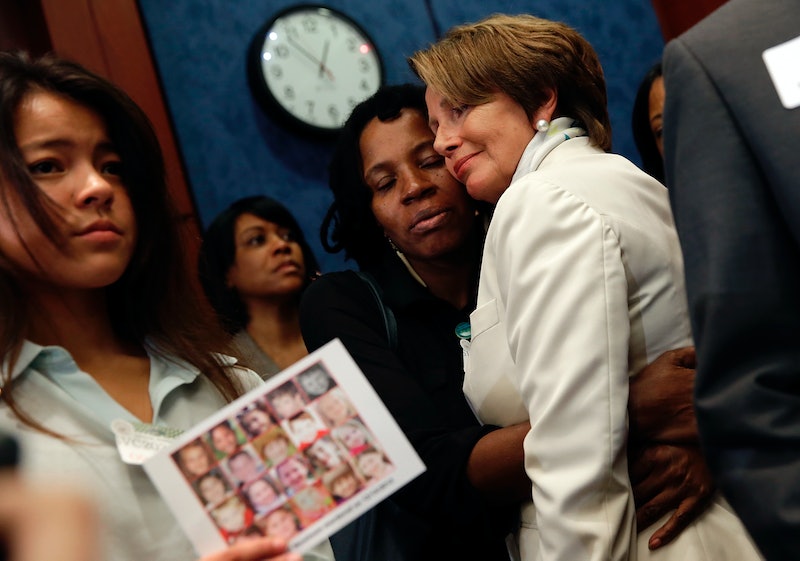 In the wake of the latest mass shooting at D.C.'s Navy Yard, Democrats are once again calling for Congressional action on gun control. This time, however, the debate appears to be zooming in on mental health, as it pertains to firearm legislation.

It's been almost 20 years since the parties have been able to substantively come together to work on gun control in a country that's increasingly being defined by its gun violence. In the 50 mass shootings since 2009, calls for gun control have almost become a cycle: Shooting, debate, stalemate, status quo.

The last time anything was almost done was in April, when a bipartisan bill put to Senate vote would have expanded criminal and mental health background checks for those wanting to purchase guns. Fewer than 60 senators voted yes. Four of them were Republicans. Needless to say, reform didn't pass.

But on Monday, Aaron Alexis, a man who displayed signs of psychosis and was treated by the VA for mental health problems, was able to buy a gun and kill 12 people at the Navy Yard in Washington D.C., practically next-door to Congress.

And so — perhaps — the discussion has changed.

If there's one thing that Democrats and Republicans might be able to agree on, it seems to be that people who are mentally unstable probably shouldn't be able to buy weapons.

“Given the clear connection between recent mass shootings and mental illness, the Senate should not delay bipartisan legislation that would help address this issue,” Senators Kelly Ayotte of New Hampshire (R), and Mark Begich of Alaska (D), wrote Wednesday in a joint statement to the Senate leadership Wednesday.

Senate Majority Leader Harry Reid (D), is also a strong proponent of expanded background checks, but said Monday that he simply wouldn’t have enough votes for gun control legislation to pass. According to the New York Times, he also worries that pushing mental health legislation “could be used as a fig leaf by those who oppose expanded checks while closing the door to weapons restrictions in the future.”

At this point, Reid said, he’s “willing to try anything” if it means Republicans will get on board with gun control legislation.

At the heart of the tension over gun control is states' rights. For the past three years since the 2010 McDonald v. Chicago ruling, the federal government has pretty left the fine points of firearms law to individual states, which have the power to either expand or narrow related federal legislation as they see fit.

State lawmakers in states such as New York and Connecticut have taken mental heath considerations into their weapons-purchase legislation, making it harder for people showing signs of mental illness to buy weapons. In Florida, such laws even got the National Rifle Association’s stamp of approval.

The NRA and its pro-gun compatriots spent at least $8 million lobbying against firearm control measures debated in Congress post-Sandy Hook earlier this year. Gun control groups spent less than $1 million. As a big player in pro-gun lobbying, the NRA's newfound support for mental health measures might be the monetary swing vote needed in this debate.

“Congress cannot keep standing on the sidelines while more and more lives are senselessly cut short by gun violence,” Rep. Mike Thompson (D), Chair of the House Gun Violence Prevention Task Force, said in a statement Monday. “We know there is no one law or set of laws that will stop every act of gun violence. But that cannot be used as an excuse to do nothing. Congress needs to act.”