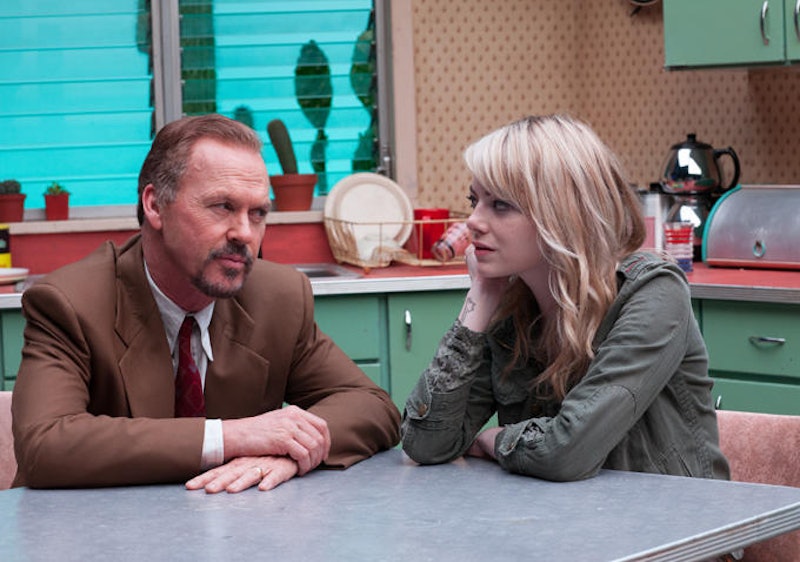 I was surprised to find out recently that, as I someone born in 1982, I am a Millennial. This wasn't a shock just because, as someone with knee pain and a 20-plus-year crush on Ethan Hawke, I couldn't believe that I shared demographic space with Elle Fanning and Jaden Smith. I was also bemused that I qualify as a Millennial because I'm not close with my parents.

If you've had the misfortune of reading any of the approximately 836,187,510,347 think pieces written about Millennials this year alone, you know that the fact that many of us are close to our parents is one of the generation's defining characteristics. Millennials may not have job prospects, self-esteem, or any hope of ever affording real estate, but dang it, we have great relationships with our parents.

If trend pieces are to be believed, Millennials talk to their parents constantly, about everything from career trajectories to Sherlock. We don't know how to make decisions because our aggressive helicopter parents intervene whenever we have a problem and indulge us constantly, even though we're adults. Millennials live at home, not just because we can't afford to leave, but because we like it there. The Millennial isn't rushing to get married, because their most enduring love story is already playing out — with mom and dad.

We don't want to raise our voices to say, "I didn't get told I was special, I was told I was a piece of crap who ruined my mother's life," because we're afraid to find out that we really are wrong, twisted, different from everyone else ... We're afraid that, like these statistics and reports seem to tell us, we really are freaks.

This is not my story. My mother was immensely troubled and tortured by untreated mental illnesses while I was growing up. Because of this, she was prone to frequent verbal abuse and controlling behavior throughout my childhood. We haven't spoken in over a year. I love my dad (who divorced my mom when I was pretty young and got shut out of my childhood as a result), but certainly can't imagine talking to him every day. And judging by all these trend pieces and surveys, I'm an extreme outlier for my generations.

Yes, Millennials on the whole have better relationships with their parents than past generations, but that certainly doesn't mean that the bad childhood has gone the way of the buffalo. After I began poking, I saw plenty of bad Millennial childhoods hiding in plain sight around me.

These bad childhoods — and the strained family relationships that they go on to create — aren't on display in cutesy trend pieces about how Millennial helicopter parents continue to coddle their offspring in the working world. They're not in trend pieces, like the NPR special on Millennials that devoted one brief paragraph to the idea that "not all young adults have this kind of [close] relationship with their parents," but two full segments to old embarrassing screen names.

I have friends who've told me they didn't consider themselves Millennials because their mom was cold, or their dad emotionally removed, or their parents had rejected them for being queer and they didn't feel like they had any place in our parent-mad generation. But we exist. Except in articles about Millennials.

Still, I'm not trying to argue that being close with one's parents isn't a trend. Seventy-seven percent of 18- to 29-year-olds stay in regular touch with a parent, because they simply like talking to them. And child-abuse statistics have been dropping over the past few decades, due to increased support for victims and better reporting procedures — incidences of substantiated childhood sexual abuse cases dropped 62 percent between 1990 and 2010. There has obviously been a sea change in how people interact and communicate over the last 30 years, and it has been wonderful.

But just because things have changed for many people, that doesn't mean they've changed for everyone. And, in fact, the research used to prop up the idea of the parent-loving Millennial is sometimes a bit suspect. Most trend pieces on the love affair between Millennials and their parents rely on anecdotal evidence, but when they cite surveys, a lot of them are sketchy. For instance, a frequently cited 1997 Gallup poll reported that 9 out of 10 Millennials reportedly felt close with their parents and happy with their family relationship. If you do the math, you can see this poll was conducted when the oldest Millennials around were only 17.

Similarly, a White House report on Millennials released earlier this year argues that "Millennials have close relationships with their parents," a concept drawn from the statistic that 50 percent of high school–aged Millennials reported "that it is important to them to live close to their friends and family." Note not only the reliance on high schoolers once again — an age group where having perspective about your family or values is notoriously difficult — but the rounding up from "family and friends" to just "parents." It takes one statement — "I want a community, I don't want to be lonely, I may be close with my parents, or my siblings, or cousins, or close friends" — and boils it down to "I am close with my parents."

Or take the Clark Poll of Emerging Adults, a national survey of Millennials, which turned the finding that 81 percent of Millennials reported a "highly positive or somewhat positive relationship" with their mothers, into:

You know those holiday-dinner movie scenes, where aging parents and their grown children serve up bitter resentments or long-held hostilities? Good drama, maybe, but merely an escape from reality for most adults, thankfully.

That jump — from reporting "somewhat positive relationships" with parents to the elimination of bitterness and family fighting — is indicative of what a lot of research on Millennials does. We take some vaguely encouraging facts about family engagement and spin them into a picture of family life that border on Norman Rockwell–level oppressive.

How are you supposed to feel if you are a Millennial born into a family full of bitter resentments and long-held hostilities? Are you supposed to feel like some sort of emotional primitive, acting out a version of family interaction and resentment that the rest of us are evolved enough to have grown out of? Are you doing the forgotten dance? How could you not feel ashamed?

In the eagerness to embrace this new paradigm of parental closeness, lots of people seem to have forgotten that other kinds of family situations still exist. In a 2012 New York Times op-ed about the debt that Baby Boomers have saddled millennials with, Michael Winerip saw fit it to quip:

I immediately picked up the phone to call Child Protective Services on myself. But before someone could connect me to the Millennial Abuse Hotline, my cell went dead. So I asked my children — I have four, ages 18 to 24 — to borrow one of their phones, which I knew would be in good working order since I pay for them.

Ha ha ha, great joke! We've successfully ended all child abuse, to the point where it is totally laughable now? Whew, what a relief! Oh, what was that? We totally haven't ended child abuse? In fact, in 2005, when a great swath of America's more than 80 million Millennials would have been under the age of 18, there were 3.3 million referrals about child abuse made to the Child Protective Services office? Oops!

I'm reminded of a 60 Minutes report on Millennials from way back in 2007, which began "They were raised by doting parents who told them they are special," and then went on declaring that Millennials terrorized The Olds at their new post-collegiate jobs, demanding that they accommodate their hot yoga classes and ayahuasca vision quests. We who aren't so privileged or close with our parents know that this is bullshit.

But because we don't discuss our family lives so freely, this myth-making is allowed to fester. We don't want to raise our voices to say, "I didn't get told I was special, I was told I was a piece of crap who ruined my mother's life," because we're afraid to find out that we really are wrong, twisted, different from everyone else. We don't want to speak up and find out that we really, truly are alone in this, and everyone else is blissed out with their families. We're afraid that, like these statistics and reports aim to tell us, we really are freaks.

But we're not freaks. The new conscious parenting techniques are wonderful, but they haven't fixed society. And, in fact, sometimes they're a form of abuse — though "helicopter parenting" is often viewed as the ultimate form of parental indulgence, a way to create self-absorbed little monsters, in reality, its obsessive monitoring and absolute control over a child's life can very easily slip over the line into abuse. Take college student Aubrey Ireland, whose parents controlled and emotionally abused her to the point that she had to get a restraining order against them. Yet in media coverage of this, the entire thing is played for laughs, chalked up as well-meaning "helicopter parenting" performed by people who cared too much, instead of abuse.

Some of us come from rotten situations filled with physical, sexual, or verbal abuse; some of us were neglected or ignored; some of us were rejected by our families; some of us just don't feel especially connected with the people who raised us. Don't forget the some.

And if you're part of that some — if you're spending the holidays alone, or afraid; if you rely on a family of friends because your real family let you down and you think this might make you a Millennial freak — know that you're not alone. We may not be the majority, but we exist. And we'll keep existing, even if no one ever wants to write a single damned trend piece about us.