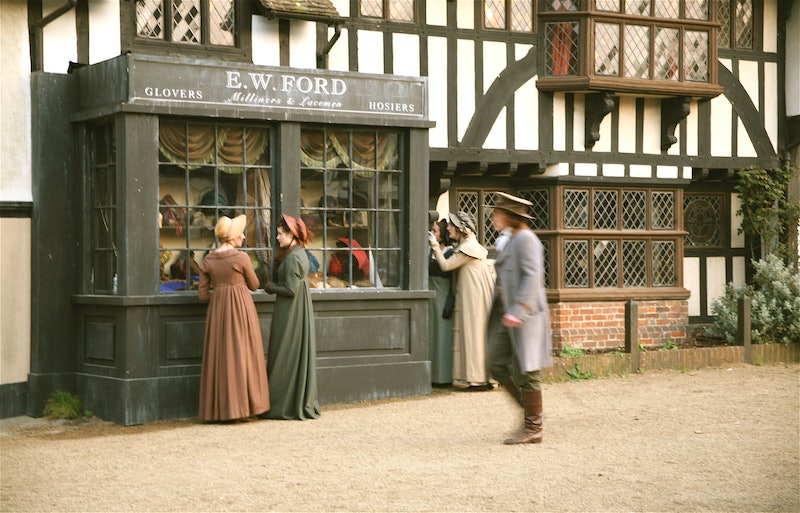 You don’t need to have actually read any of Jane Austen’s six novels to know that her heroines are legendary. It is a truth universally acknowledged, basically, that a person in possession of even the minimum amount of literary fluency is aware of Elizabeth Bennet. You know, the spunky one? The one who inspired the viral "Lizzie Bennett Diaries" YouTube series? The one who sought to vanquish the brain-eating menace invading Meryton in Pride and Prejudice and Zombies ?

Or how about Emma Woodhouse of Jane Austen’s fifth novel, Emma? You know her: her story provided the inspiration for Clueless , a 20th-century masterpiece, a triumph in encapsulating mid-'90s Southern California rich-bitch culture much in the way that the original novel characterized its own era’s stratified class system. But even if you don’t know the story, you know Emma (or Cher Horowitz): the well-meaning but exasperating yenta; the plucky yet prudish ringleader of her pack of loyal acolytes.

This is what makes Jane Austen’s heroines so renowned — and perhaps even more famous in their own rights than Austen’s novels themselves: Although each leading lady represents a Regency-era archetype, their complexity, their realness, has kept them all relevant throughout the rapidly changing times. So in honor of Jane Austen Day, I’ve imagined how each of Austen’s six heroines may have fared in 2014. You don't need to be a die-hard Janeite to recognize each of these six women — if not from between the pages, then maybe from your own life.

When not searching for a pair of Victorian lace printed leggings at Hot Topic that don’t sag around her bony knees and nonexistent ass, Catherine — or midnight_cat, as her 427 Instagram and 1,439 Tumblr followers better know her — spends most of her time reading Daphne du Maurier paperbacks at her local coffee shop. She is so lucky to live in a college town, populated by actual book readers. She’d totally drown in the shallow pool of some bougie suburban mall town. Cat’s secretly into mainstream stuff, too — Gillian Flynn is kind of her hero — but she’d never admit that to anyone. Not even her theater-nerd friends, who she only hangs out with because they’re the only people who exist outside the pages of her secondhand paperbacks (so much more romantic than a Kindle) who understand the dark and stormy terrain of her internal world a little, tiny bit. Well, they did inspire Cat to Manic Panic her hair Raven black, which she thinks is much better suited to her moody constitution than her natural mousy brown.

But Cat knows better than to publicize her embarrassing appreciation for anything mainstream between the exposed-brick walls of Fullerton Coffee Shop, where she’s thisclose to getting up the nerve to talk to that cute undergrad Henry who she’s been maybekinda stalking. What better way, Cat philosophizes, to show your hardcore devotion to a potential suitor than by memorizing his coffee order? (Henry’s: medium drip, three raw sugars). At the very least, Cat imagines, her kittenish stares will provide Henry with short story–worthy material for his Intro to Creative Writing workshop. It's always been her dream to be written into a piece of quality literature.

Once Edward finally proposed — after a year of Elinor’s steady implication of reverse-psychologizing on her shockingly complacent boyfriend — Elinor insisted on trading in the 2.5-carat princess-cut whopper her mother undoubtedly picked out for a classic, one-carat Tiffany-set ring. While she gives Edward well-deserved props for recruiting help in the ring-buying process (though he should have employed essentially any woman besides her well-meaning but hopelessly dull mother), there’s no way the boys’ club at the firm would take her seriously with a ring like that.

Of course, Elinor isn’t planning on clawing her way through the testosterone-heavy thicket of second-year associates to get to the top of the firm: she’ll continue to rely on her quiet self-assurance. This way, Elinor predicts, she’ll make partner in six years. That is, if she decides not to be a stay-at-home mom/telecommuter when she and Edward have their three children within the next 10 years. But after a couple years of therapy, and a learned appreciation for the self-help section of the Amazon store, Elinor has learned that trying to plan for every unpredictable circumstance in her life will only lead to the emotional breakdown she'd just managed to avoid after the whole inheritance debacle. She vaguely wonders whether she's chosen to enter such an overwhelmingly male-dominated workforce to avenge, posthumously, her romantic father's utter lack of concrete planning. I mean, no written will? Really? Ah, well. That's what tri-weekly Hatha yoga is for.

Elizabeth Bennet-Darcy hadn’t quite realized how boring everything would be after officially hyphenating her name. It was almost as if the insatiable drama that had plagued Lizzy B.D. (Before Darcy) was so consuming as if it sucked all the fun, all the verve out of Lizzy A.D. Such were Elizabeth’s grueling thoughts as she wiled away her time at Pemberley — a time so seemingly interminable, so painfully unforgiving — while her hard-earned husband went off doing whatever the hell it was he did during the day. (Lizzy’s not convinced that anyone quite knows Fitzwilliam’s job title.) And such were Lizzy’s quandaries when she sat down to write her debut novel, The Gentleman’s Daughter, a sprawling multigenerational epic based not-so-loosely on her own colorful family. Upon its publication through an established but erudite press, the novel promptly became an indie darling, then a best seller, then shortlisted for the Man Booker Prize. The New York Times included the novel on its Best Books of the Year list, dubbing it “a searingly observed, sumptuously crafted triumph.” Whatever that's supposed to mean.

Now Lizzy trudges through her second book which, in an attempt to avoid the inevitable sophomore slump, she's considering reworking into a sharp, hip YA novel. In the meantime, she posts bi-weekly entries on her highly respected blog. She's also been dodging incessant calls from Vogue, who want to send Hamish Bowles to Pemberley to profile this brilliant young writer/wife at her stately home. Lizzy is considering giving in to the offer: She is, after all, always wishing for more human bodies to populate this ridiculously cavernous mansion.

Fanny has settled, finally, into her place in the Bertram family. Perhaps she required the official adoption of the family name to truly believe she had the right to claim membership — the family had caused her such trembling heartache, such consistent unease as a young girl, and it’s been difficult to get over her tumultuous childhood. Well, the Paxil kinda helps. But Fanny is an adult now, a married woman, and Edmund is just as upright and respectful and virtuous as he was as the sensitive young boy who took an interest in Fanny. And who, let’s not forget, promised himself to Mary Crawford; but even the most well-meaning among us make mistakes in the bloom of youth. And a look at the now-divorced Mary’s face, prematurely pulled and plumped beyond all recognition, proves Edmund dodged a bullet there.

Edmund’s strength of character, and his unusual sensitivity, makes him a wonderful clergyman, a much-needed stalwart against the fripperies of modern life. Fanny has flourished into her role as the clergyman’s wife. She spends much of her time counseling female congregants, hosting book clubs, and volunteering at the local humane society. Fanny was thrilled to take on the role as Head Judge at the town’s annual bake sale, a competition whose fierceness Fanny secretly relishes. But after such a turbulent girlhood, grown-up Fanny is just fine getting her dose of drama vicariously, through the occasional (okay, regular) Real Housewives marathon and a glass or two of Chardonnay.

Emma is (finally!) in the finishing stages of planning her wedding. She’d love to run you through the details — truly, there is nothing she would like to do more than discuss her forthcoming union with the Perfect Man — but she’s running late for her balayage appointment with George Northwood, so she’ll just provide you the necessary, and well-rehearsed, bullet points: June 14 at Kensington Palace Orangery; 200 guests for an evening ceremony followed by a formal dinner followed by reception; bespoke platinum-and-diamond bands by De Beers; custom dress by Vera Wang; cream and platinum color palette; white hydrangeas and red roses everywhere. Everywhere.

She knows what you’re thinking: 200 guests? That’s practically a casual get-together! Knightley, of course, reigned in the original 500-person guest list, forcing Emma to choose who she truly wanted to share their (well, her) special day with, and who she invited mostly for show. This brought on a moment of serious and painful self-examination, which passed as quickly as it came. Bless George. What an excellent young man. When not planning her wedding, Emma plans other people’s weddings as co-owner and head designer at Mrs. Knightley Events (she was, admittedly, a tad overzealous on the name), London’s premier design firm for the city’s premier class. Although match-making may not be her forte, she realized, no one is better qualified than her to make the lovebirds look absolutely dashing on their wedding days. (But she, of course, will be the most dashing of them all.)

Oh, how happy Anne has become! What a relief it was to get out of her parents’ garish shadow, to abscond her angst-ridden childhood home after marrying Frederick. She hadn’t quite realized that the root of her anxiety was her continual failure to relate to her parents’ inborn sense of entitlement. But after her engagement she’s felt motivated to read a lot of feminist works: Kate Chopin’s The Awakening summoned in Anne a serious existential crisis, which she nevertheless managed with grace. She then graduated to Lena Dunham's Not That Kind of Girl, which Anne found mostly appalling, but also sickly fascinating, but it mostly enlightened her to the indubitable fact they mess you up, your mum and dad.

Anyway, now that she and Frederick have moved into their adorably rustic house just outside Bath, Anne’s been enjoying setting up a nest all her own. She’s grown especially fond of the urban-rural trend, scouring Pinterest for a reasonably priced, stylized antler chandelier for their dining/living area. Oh, Pendleton prints, too; she can’t get enough. The colorful yet subdued prints, the ages-old symbolism ingrained in each special pattern, remind her of the meaning and sacredness inherent in everything. She wouldn’t tell Frederick that, of course: Though he’s sympathetic, he’s much too level-headed to indulge in Anne’s philosophical musings. Which is just as well. Someone has to fund Anne’s borderline compulsive Etsy habit, and her job teaching crafts at the elderly center certainly won’t cut it.