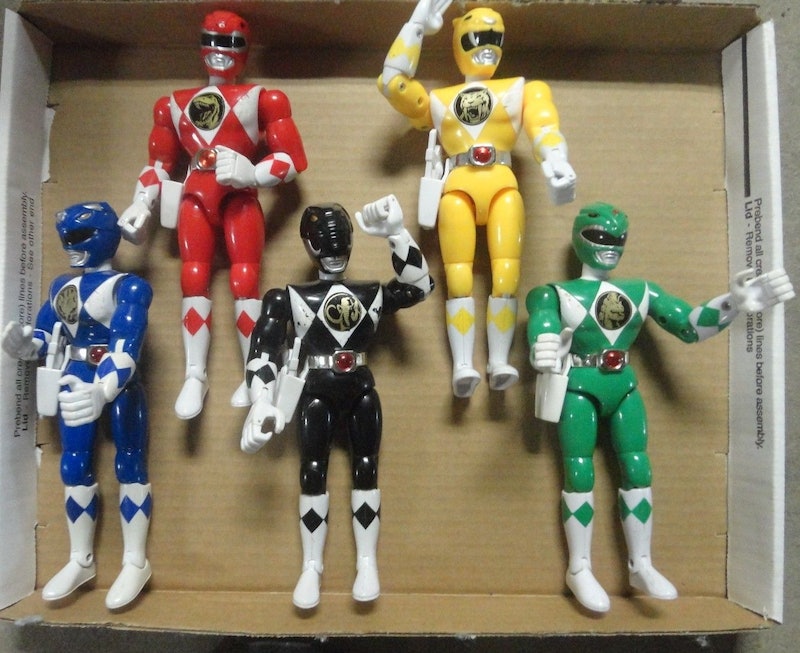 Unlike Furbies, Polly Pockets, and Tamagotchis (so many fond memories! #tbt), there's one bestselling toy of Christmas past that's still going strong decades later. Power Rangers were the most popular toy to give for Christmas in 1994, and even now they're still highly in demand. But although Power Ranger toys may have managed to withstand the test of time, today's action figures aren't quite the same as the original toys that first hit the shelves 20 years ago. Because it's the holidays, and because we're feeling nostalgic, we decided to find out just how much money original Power Ranger toys are worth today. Spoiler alert: Not much.

In 1994, when Power Rangers were the bestselling toy, each figurine cost only $10. And believe it or not, these action figure prices have not really climbed at all since then — you can still buy a basic figurine for under $10 on Amazon. Much less shocking than Beanie Babies, which now retail for up to $625,000 on eBay, or American Girl Dolls, some of which can set you back $700 — yikes!

And if what you're craving are some collectibles, you won't have to reach much deeper into your pockets. You can actually buy all five original Power Rangers (from 1993!) on eBay for only $42.50. Not bad at all. And how sweet is this note from the seller, letting buyers know the toys have "minor ware due to play" [sic]. I can just picture a grown-up fondly reminiscing about the great times they had playing with these action figures while sporting a trendy bowl haircut and sweet turtleneck.

If you're looking for specific figurines still in their boxes, though, that might put you back a little more. This 1994 Mighty Morphin Green Ranger with a head that flips over to "morph" into Power Ranger mode is going for $45.

Get a fancy Deluxe Thunderzord Megazord assault figure for Christmas in 1994? Put it on eBay, and you could be $140 richer.

Definitely not a bad deal, though, especially when you look at Power Rangers retail prices today. Power Rangers are still going strong, but the basic figurines aren't the most popular anymore — kids these days, they want all the bells and whistles (I don't sound old, do I?). Just take this popular toy on Amazon: the Power Rangers Super Megaforce — Legendary Megazord. I don't even know how one toy can contain so much "mega." At $56.99, this fancy Power Ranger is way much more expensive than the original figurines were — and still are, for that matter.

Still, it's nice to see some things have staying power. And make sure your niece holds on to all her Frozen merchandise — seriously, how much will that sell for on eBay in 2034?