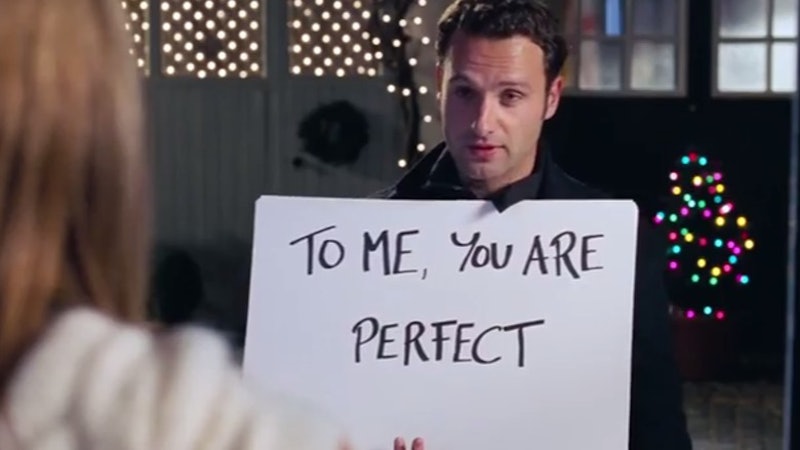 Love Actually came out more than a decade ago, but the debate over whether it’s a Christmastime must-watch or a terrible movie to be avoided at all costs is still going strong. Regardless of how you feel about it, ugh, you’ll want to check out UCB alums David Craig and Lily Du’s hilarious new Love Actually choose-your-ending video, which lets you not only watch a brilliant spoof on one of the movie’s most well-known scenes, but also actually alter the ending depending on how you see fit.

You probably know exactly what part I’m talking about — the doorway scene between Keira Knightley and Andrew Lincoln’s characters, in which the latter holds up cue cards professing his love to the former. It’s one of the most frequently quoted and highly contested scenes in the film, and whether or not you love or hate the movie overall, it seems everyone who has ever watched Love Actually has had strong feelings about that divisive moment in the movie.

Some hopeless romantics find the scene gloriously cheesy, and will gush shamelessly about its amazingness to anyone around who will listen. Others have pointed out that not only is it wildly unrealistic, but also that Lincoln’s character has a few stalker-like tendencies that seem, well, a little creepy. No matter which side you fall on, you now get to have complete control over the scene’s ending, thanks to this hilarious new parody.

In the clip, Craig recreates the cue card scene, down to the illustrations on each sign. But right before the moment where the character is supposed to walk away (only to have Knightley chase him down and reward him with a kiss, of course), the video stops and presents two options: “Love Actually… is Blind," if you’re into the more-than-slightly absurd rom-com way of doing things, and "Love Actually… is Honest," if you’re into a more realistic viewpoint. Both options result in hilarious endings, but the “Honest” selection is especially, awesomely snarky — and will probably be immensely satisfying to the longtime naysayers of the film.

Choose your own ending, and watch it play out above. And while you’re at it, you might want to relive some of the other hilarious parodies that have come our way throughout the years. Ah, Love Actually— melting hearts and spurring eye rolls since 2003.

More like this
Meet The Disney Imagineer Bringing 'Guardians Of The Galaxy' To Epcot
By Charlie Mock
What Is “Night Luxe?” Breaking Down TikTok’s New Aesthetic
By Courtney Young
Here’s What Sarah Jessica Parker’s Canned Cosmo *Actually* Tastes Like
By Emma Garza
TikTok Is Using A ‘Love Island’ Sound To Expose Their Weird Crushes
By Courtney Young
Get Even More From Bustle — Sign Up For The Newsletter