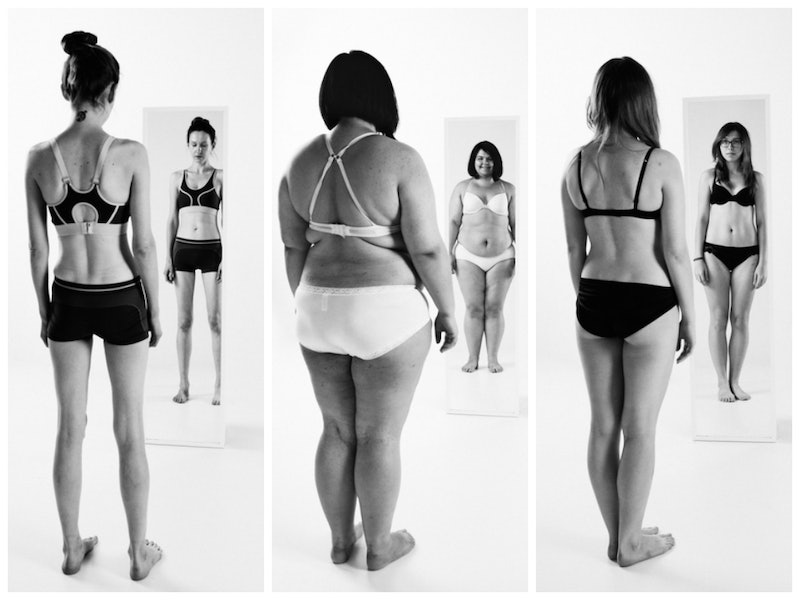 The mirror is traditionally a source of vanity — an inanimate object that we're far too attached to. Far too enveloped in. There's a reason mermaids in folklore are so often portrayed as having a hand-held mirror, after all. It is a sign of the aforementioned vanity — their beauty a means of luring in sailors to their deaths. And there's a reason why Abnegation (a faction in Veronica Roth's Divergent) rejects all reflective surfaces. They are a selfless people; they are humble.

We know mirrors lead to a lot of self-analysis. In them, we see our selves. We see every aspect of our faces and bodies up close. We are able to determine our highlights and our flaws. It's quite possible that derivatives of the mirror have been around for 8000 years, but the mirror as we know it came to be in approximately 1835. Maybe its invention was rooted in practicality. We have a basic impulse to know what we look like, right? But somewhere along the way, the significance of the mirror changed. It became grounded in self-deprecation: in harmful self-analysis and critique. It became a generator of body dysmorphia. And that is, perhaps, why Lithuanian photographer Neringa Rekasiute's "We. Women" photo project is so important.

"We. Women" is by far one of 2014's best moments in body confidence. In this series, Rekasiute places her subjects in front of the very source of countless individuals' body hatred: the mirror, of course. On her site, she presents the project with this:

"Our media is full of images, attempting to construct what a perfect woman should look like. But what is a beautiful woman?"

It should come as no surprise, then, that the women in her photographs are all quite different. Their range of sizes (in my estimation) is approximately 0 to 18 — an important, and necessary range, when you consider that issues in body image are not isolated to the plus-size community. Hating of the self extends far above and beyond any one size group, any gender, any community. Be it because of the media — because of the unrealistic but "aspirational" imagery we're presented with in the day-to-day — the majority of human beings experience difficulties in achieving positive self esteem, at some point in their lifetimes. And the mirror — the image staring back at you from afar — is the source of a lot of those difficulties.

Body dysmorphic disorder can manifest itself in many forms. You can end up honing in on one "flaw" and totally blowing it out of proportion. Or you can completely see something that isn't there. We've all seen gifs or memes or illustrations of a slender woman looking at herself in a floor-length mirror, with the image of a figure twice her size, or larger, staring back. It's a very real problem, and one that lives somewhere in the categories of "eating disorder" and "mental illness." But it is an excruciatingly common phenomenon — one I am willing to bet the majority of people have experienced.

That Rekasiute uses the mirror is a bold move. She's making a statement against our impossible standards of beauty, and she's doing it in a raw and powerful way. Unlike all those gifs or memes or illustrations, the women in these pictures see only themselves in their reflections. They see their bodies, as they truly are. Their expressions change from photo to photo. There are smiles; there are frowns. But all of the women seem to be taking a step toward self-acceptance. They seem to be saying, "This is me. I'm not perfect. But that's OK." Or, at least, that's what I see when I look at these photographs.

In collaboration with Beata Tiskevic, a prominent actress and TV host in Lithuania, Rekasiute set out to bring real women into this project, recruiting via Tiskevic's largely followed Facebook page. In an interview with Huffington Post , Rekasiute says of those who volunteered to join "We. Women," "Women were writing about bulimia, anorexia, fat-shaming, skinny-shaming, violence from men. This project showed us lots of deep scars in our society." By posing the 12 final women in front of a mirror, they were each confronted with some kind of fear. Some kind of insecurity. And they each tackled it beautifully.

Tiskevic told Huff Post, "We are not only our body — the body is only form rather than content." And it's so very true. We are not our bodies, despite the fact that this is what we are taught to believe. Our bodies are a part of us, and we should be able to represent the self through the body. But the physical is not the everything. We have to learn to take our bodies back: to take them away from the self-deprecating and self-loathing that come as a result to listening to notions of beauty established on a TV screen or in a magazine. We have to live for the self, and be unafraid of letting that self shine through. The beauty of the imagery in this photo set is that it does just that. It lets the unadulterated self shine through.

More like this
What’s The Kibbe Body Type Test That’s All Over TikTok?
By Marilyn La Jeunesse
What Is “Jello Skin”? The Latest Viral Trend To Know About
By Tomi Otekunrin
Here's Your Daily Horoscope For May 18, 2022
By Mecca Woods
Everything To Know About A Potential 'Love On The Spectrum U.S.' Season 2
By Gretchen Smail
Get Even More From Bustle — Sign Up For The Newsletter