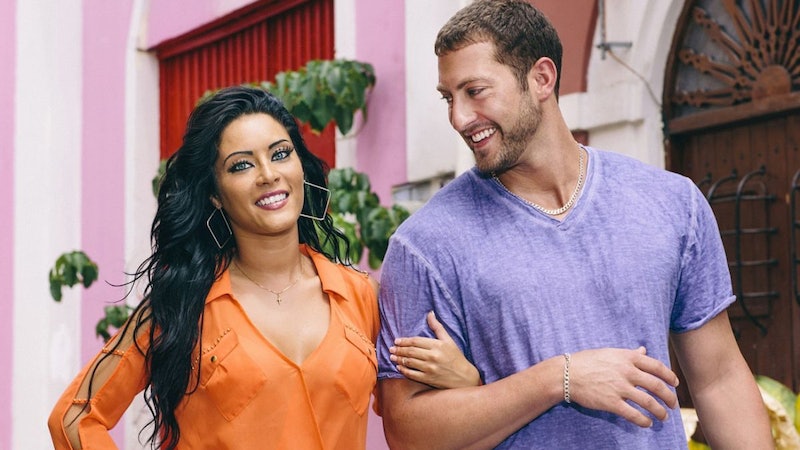 It's hard to believe that Are You The One's second season is already over — and even harder to believe that this season's group of people managed to find their matches and take home the million dollars. I was pretty iffy on whether or not they'd actually win the money, but at the last minute, they pulled through, and those 10 beams of light appeared. Now, as we wait for Monday night's reunion show, I'm left in a total state of suspense over which couples are still together and which didn't end up matching outside the show. So what's the deal with Jess and Layton? Are they together now?

Unfortunately, their Instagram and Twitter accounts are keeping pretty quiet on the matter. Layton's main concern seems to be the fact that his Instagram got deleted, so he's trying to gain back the following he had on his original account — and like a good friend (girlfriend?) Jess has pitched in on spreading the word via her own social networking accounts. And in the meantime, it seems like she's focused on her friends... specifically, the friends she made while on the show.

It's understandable that the cast has to stay mum on their relationship statuses ahead of the reunion, but that doesn't apply to friendships, and Jess seems perfectly happy to brag about meeting her "3 perfect matches" — Bianca, Ellie, and Christina.

The only clue that I can find that she and her match might still be together is this tweet from MTV that Jess retweeted. There's a good chance it means absolutely nothing, but it's worth mentioning. I wouldn't be surprised to find out that their relationship is working, although it must be pretty difficult when their home bases are across the country from each other... and it would be kind of shocking if Layton was willing to put down roots somewhere other than the south.

Speaking of the south, Layton has been looking forward to getting back to Mississippi to see his family for the holidays, and shared a cute picture of them on the beach.

Also, if you're super pumped for the reunion, he uploaded a photo of the set — and it looks pretty awesome. Undoubtedly a lot of drama is about to go down in those chairs, and I only wish i could be there to see it live and in person.

More like this
Marissa Has No Regrets About Her ‘Temptation Isand’ Romance With Edgar
By Brad Witter
Scott Disick’s First Time Around Kravis Was “Awkward,” To Say The Least
By Jake Viswanath
Kim Kardashian Joked That Her Wedding To Kris Humphries Was A “Gay Wedding”
By Jake Viswanath
Kourtney Kardashian Broke Her Engagement Ring & Cried In Her Closet For Hours
By Jake Viswanath
Get Even More From Bustle — Sign Up For The Newsletter