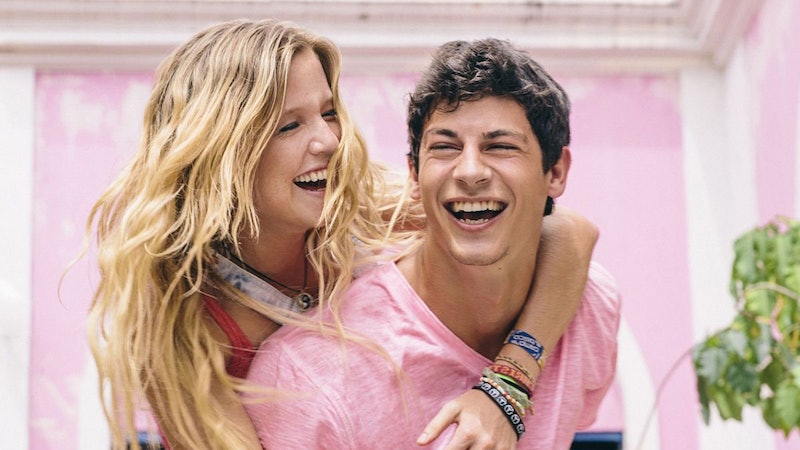 From the beginning of their romance, Are You The One's Brandon and Christina took us on an emotional roller coaster. At first, they were super cute together and truly seemed convinced that they were each other's perfect matches. Unfortunately, the Truth Booth had other plans for them. But despite the fact that they actually weren't each other's match, Brandon and Christina stuck together as much as they could — even if it meant hurting their fellow housemates in the process. But now, the season is over, which means they're free to be together without MTV getting in their way. So what's their deal? Are Brandon and Christina finally together?

According to social media? Brandon's been dropping a few clues that they're in a relationship, while Christina isn't giving anything away. In fact, judging by her tweets, it seems that she and her AYTO BFFs have moved into a house together in San Diego — or they're just enjoying each other's company for an extended visit. If only there was a season of Are You The One? based solely on friendship. I'd totally audition in hopes of winning a million dollars and finding a bestie who is perfectly compatible with me.

But onto the clues. Brandon posted this photo on Twitter, and it definitely looks like the people — a dark haired guy and a blonde girl — in the drawing are supposed to represent him and Christina, right?

And this picture, posted on Instagram last week, is definitely him and Christina. And I'm not sure he would post a picture like this if they weren't still together, so this seems like a solid answer that they're still dating... and happily, at that.

Kind of adorable, right? I might be more inclined to think so if they hadn't let their relationship ruin a lot of people's experiences in the house. But that's just me. If they're happy after the fact (and a whole lot richer, might I add), then good for them!

Now it's time to speculate whether or not they're going to come to the reunion with interesting news. Are they in a real, serious relationship? It wouldn't surprise me in the least — and if Christina's besties have moved to San Diego, it wouldn't be surprising to find out that Brandon had plans to relocate to be near her, either. Monday night will tell all!