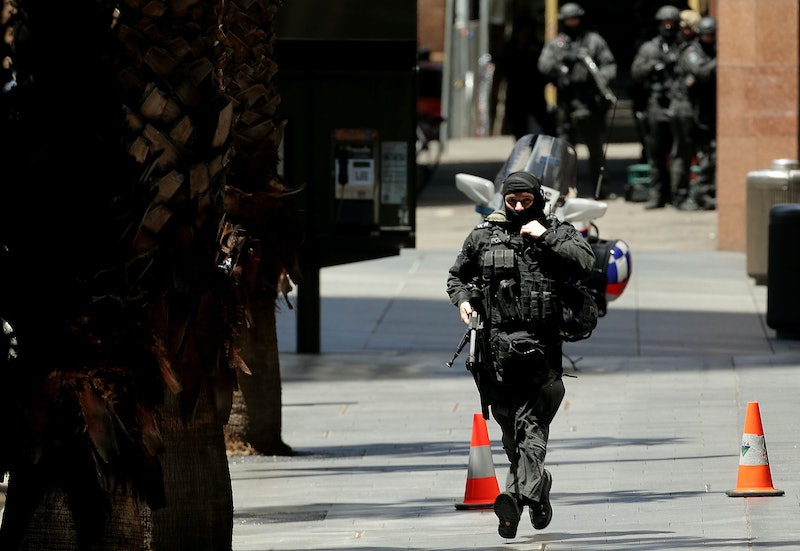 As shown on Australian national television, and now being reported by NBC News, five hostages are now free from the Sydney cafe where they'd been held by at least one gunman since about 9:45 a.m. local time Monday. While an initial group of three were seen fleeing from a side-door of the cafe, reports emerged in the next hour that another two had followed suit. What it precisely means isn't entirely clear — whether they got away on their own, or whether they were released by the hostage-taker who's still inside. But this much is very clear: five people are out of that harrowing experience, and that's something to be grateful for.

According to the Los Angeles Times, New South Wales Police Commissioner Catherine Burn declined to give the press any details about how many people remained in the cafe (initial reports suggested no less than 12 or 13, with the CEO of Lindt later suggesting it could be as high as 40), or how the five managed to get out. And frankly, that makes a lot of sense — if there's some unique way that that the hostages did find to escape, it's like in everyone's best not to risk revealing it. At this point, the most we can all only hope is that more people are going to come running out soon, safe and very much sound.

The tension in Sydney Monday isn't solely limited to the sieged cafe, either. Landmarks all over the city have also been shut down in accordance with the threat, and reports have emerged of a suspicious package at the world-famous Sydney Opera House. Of course, especially with these kinds of tumultuous, panicked stories, a measure of calm and restraint is important — until there's further news broken, a suspicious package may be only that, and there's no indication that it has anything to do with what's happening in Martin Place. But the seriousness with which the situation is being taken is readily apparent, with helicopters whirring above the Australian metropolis.

According to CNN, there has been another notable development that's now been revealed to the media by Commissioner Burn — the police have made direct contact with a hostage-taker inside the cafe (reports have consistently indicated there's at least one, so there's no telling for sure if he's alone).