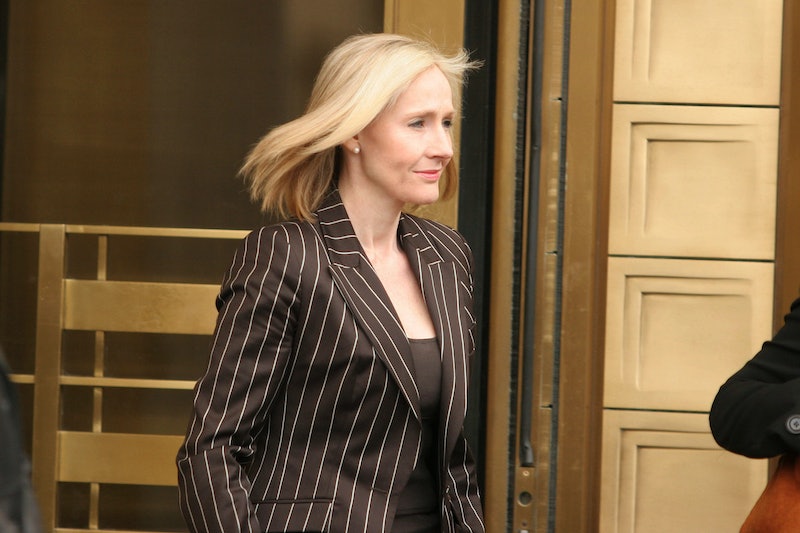 Listen, J. K. Rowling essentially gave me my childhood on a platter (in the form of a seven-book series and an eight-film franchise and a theme park), but sometimes she hurts me deeply. No, I don't mean when she said Harry Potter and Hermione Granger should have gotten married instead, although thankfully the fandom has managed to overcome that bombshell without cracking apart as thoroughly as they seemed poised to at the time. Instead, I mean that Rowling has apologized for killing a Harry Potter character that basically no one cares about but her. I'm sorry if you are one of the few Florean Fortescue fans out there who wondered why the ice cream shop owner had to go, but, seriously, who cares?

Whether you read the books or only watched the movies, Rowling reached into your chest cavity, pulled out your heart, and stomped it into tiny pieces at some point during the franchise. It's just a fact. So, I apologize if, as a Harry Potter fanatic, I can't find it in me to be anything else but offended that the death that's bothering her the most from the series is that of a minor character casual fans wouldn't even remember the name of. I mean, honestly. There were so many other more worthy deaths that she needs to apologize for.

In what was, to me, one of the absolute cruelest moments of the Battle of Hogwarts, Percy Weasley stops riding the Giant Jerk Train he'd been a passenger on since circa Goblet of Fire and rejoins his family and siblings in the fight to save the world. Not even five seconds later, Fred Weasley is killed. Let me repeat. Rowling killed Fred Weasley and left George Weasley alive (and ear-less) literally a second after he reconciled with his estranged brother on the battle field. APOLOGIES ARE FOREVER IN ORDER.

Fun Fact: Arthur Weasley was originally slated to die in Order of the Phoenix , but he got to survive the book series in exchange for Rowling adding two more lives to the body count in Deathly Hallows. Sirius' death likely had nothing to do with that, but I'm still upset that he was killed mid-sentence by a curtain in the Ministry of Magic. Especially since one of the last things he said to Harry was accidentally calling him by his father's name. Seriously. Ouch.

I'm sorry, but Tonks got the absolute worst rap in the books. We meet her and she's awesome and then she returns to be depressed for a while because Remus Lupin won't love her. Then she gets together with him in time to have a baby with him and then die. Um. What? Tonks' death seemed pretty cruel and unnecessary to me, like it was only done as a replacement for keeping Arthur Weasley or only done because she was at Remus' side. She deserved so much better.

To be honest, Dobby was both annoying and creepy to me in Chamber of Secrets, but that doesn't mean I wished death on the little guy. Especially considering his death scene was literally one of the most heartbreaking parts of the films — and it was a really heartbreaking film to begin with.

Listen. Listen. I understand that the last of the Marauders had to go and they're all together in death and Mischief Managed and whatever whatever, but I think Remus deserved at least a better death than being found by Harry laid out in the hallway with the rest of the dead. Sirius, James, and even Peter got their deaths highlighted and Remus got shuffled off to the side and ignored, much like he was throughout much of his life.

While the fate of Ron's overenthusiastic ex-girlfriend was left ambiguous in the books, Deathly Hallows — Part 2 left absolutely no doubt that Lavender Brown had been killed by the cannibalistic werewolf Fenrir Greyback. He was still eating her when the trio came across her. Nightmares, much? Now here's a death that's deserving of an apology.

To be honest, I'm not the biggest fan of Severus Snape. I mean, the guy did tell Lord Voldemort to kill James Potter and Harry Potter and leave only Lily Potter alive so he could get with her. That selfish request might have been what ultimately enabled Harry to survive the attack, but he's not getting any brownie points from me from it. In fact, the only reason I wish she regretted killing Snape was so that Harry could have named Albus Severus Potter after someone a little more worthy. (Albus Remus Potter, anyone?)

More like this
Ottessa Moshfegh Is Happy To Be Your “It” Girl
By Arya Roshanian
'The Summer I Turned Pretty' Book Ending Is An Emotional Rollercoaster
By K.W. Colyard
5 Gripping Books To Read From Women’s Prize For Fiction Winner Ruth Ozeki
By El Hunt
Nina LaCour Had To Grow Up To Write 'Yerba Buena'
By Casey McQuiston
Get Even More From Bustle — Sign Up For The Newsletter