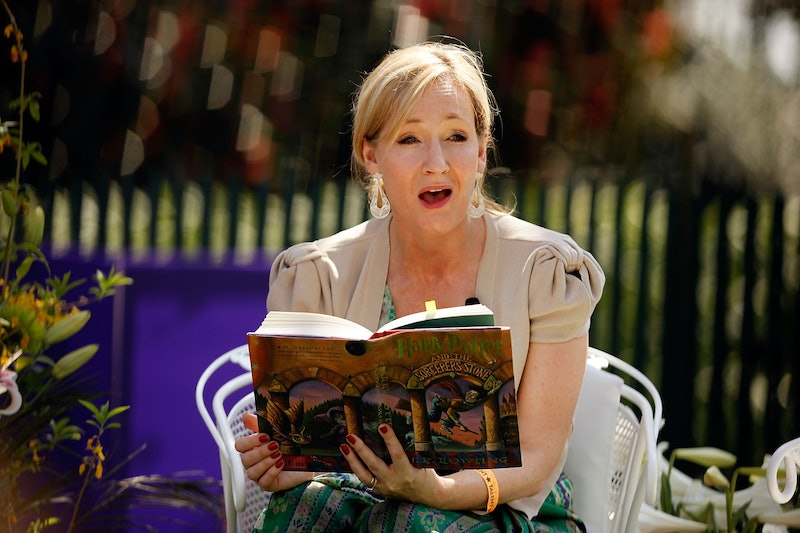 Throughout the Harry Potter series, armies of fans raged over whether Hermione Granger would end up with Harry or Ron Weasley. And by the time the series ended in 2007, we thought we had our answer in the series epilogue's portrayal of a happy Weasley-Granger family 19 years after the events of the final book. But now, years later, J.K. Rowling has thrown in another plot twist: she thinks Hermione might have been better off with Harry.

In an interview with Emma Watson for Wonderland magazine, parts of which were released Sunday, Rowling said she paired Hermione and Ron "as a form of wish fulfillment.” Watson, who played the brainy witch in the series' movie adaptations, is guest-editing the magazine's upcoming issue. Rowling further explained, "That’s how it was conceived, really. For reasons that have very little to do with literature and far more to do with me clinging to the plot as I first imagined it, Hermione ended up with Ron."

She went on to say she thinks Hermione and Ron might have needed couple's therapy. The full interview has not yet been released, so we don't know yet why Rowling thinks Harry might have been a better option. It's not the first scrape Ron's character has escaped: two years ago, Rowling said she almost killed him off altogether.

Of her decision to have Hermione marry Ron, Rowling said, "It was a choice I made for very personal reasons, not for reasons of credibility." And Watson seemed to agree, telling Rowling that "there are fans out there who know that too and who wonder whether Ron would have really been able to make her happy." But not everyone is so sanguine.

"Am I breaking people’s hearts by saying this?" asked Rowling. "I hope not.” Too late, Ms. Rowling. Too late.

More like this
Harry Potter's Viktor Krum Has Undergone A Huge Transformation Since Hogwarts
By Sam Ramsden and Meguire Hennes
Everything You Need To Know About 'Rings Of Power' Actor Charlie Vickers
By Darshita Goyal
Viserys’ Fate On 'House Of The Dragon' Could Differ From The Book In This Surprising Way
By Grace Wehniainen
'The Lord of the Rings: The Rings of Power' Revisits Iconic Spots From 'The Hobbit'
By Darshita Goyal
Get Even More From Bustle — Sign Up For The Newsletter