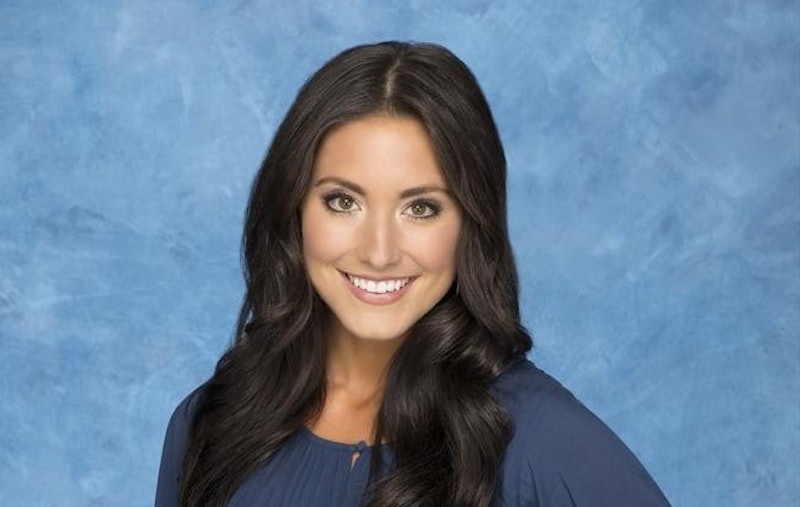 With the newest installment of The Bachelor on its way, comes the time when we have to learn everything about the women who are contestants for Chris Soules' Bachelor heart. As all Bachelor fans know, the first episode of the season is always a chaotic mess, with women doing just about anything to stand out to the bachelor. Because we don't get an opportunity to learn that much about each women in the first episode, let's get to know one of Soules' Bachelor women, Nikki, the former Jets cheerleader. But let's be clear about one thing: there's more to her than her last job.

Nikki Delventhal, 26, is just one of the Bachelor contestants who is hoping to find a connection with Chris this season, and ultimately marry him (although I have always thought that end game was very rushed). Nikki is from New York City, according to her Bachelor bio, loves carrots, coffee, exercise, friends, and family (probably in no particular order, but who knows), and has an extremely impressive resume for someone who is only 26. Here's what you need to know about Nikki and her pursuit to win over Chris Soules on the 2015 season of The Bachelor:

She was a New York Jets Cheerleader

From 2011 until 2013, Nikki cheered for the New York Jets, as part of the Flight Crew — the team name. The team averages around 40 women on its roster each season, so you know Nikki must be talented to have made such an exclusive team. If we know anything from the Bachelor, it is that they will sell Nikki as a professional NFL cheerleader (even though it was for two, maybe three years of her life). Maybe she'll cheer, flip, dance, and shout her way into Chris' farm boy heart.

She Worked for Sally Hershberger

Nikki states on her ABC bio that one of her greatest achievements was working for Sally Hershberger. Don't know who that is (don't worry, I didn't either)? Sally Hershberger is a famous hair stylist who is extremely well-respected in the hair industry. She is known for her giving Meg Ryan her famous haircut and charging $600-plus dollars for getting those hairs cut. Nikki, according to her bio, has worked for Sally, which probably explains why her hair looks so perfect.

Ask Her Bbout Her Fitness

One thing you might notice from Nikki is that she is extremely fit, which makes sense since she bills herself as a fitness trainer on Twitter. Check out her website if you're interested in seeing her fitness portfolio.

Another thing Nikki marks as a great achievement in life is signing with Wilhelmina Models. We get it, you're successful. Nikki, who is not shy to share all of her modeling gig photos on Twitter, was recently featured in Women's World Magazine.

I personally think she should have led with this one, since it is much more apropos for The Bachelor than any of her other gigs. Plus, she gets to wear very serious capes — Chris seems totally into that, right?

While she seems like a fine women, we won't really know how we like her until the show starts in January. My initial reaction regarding her and Chris' compatibility is that I just don't know how big the romance novel modeling scene is in Iowa farm country.

More like this
Becca Tilley Confirmed Her & Hayley Kiyoko’s 4-Year Romance With A Heartfelt Note
By Brad Witter
What’s New On Netflix: 'Stranger Things' & 'Somebody Feed Phil' Return
By Arya Roshanian
Twitter Has Very Mixed Feelings About The New 'American Idol' Winner
By Jake Viswanath
Kourtney Kardashian & Travis Barker’s Italian Wedding Photos Are Finally Here
By Grace Wehniainen
Get Even More From Bustle — Sign Up For The Newsletter