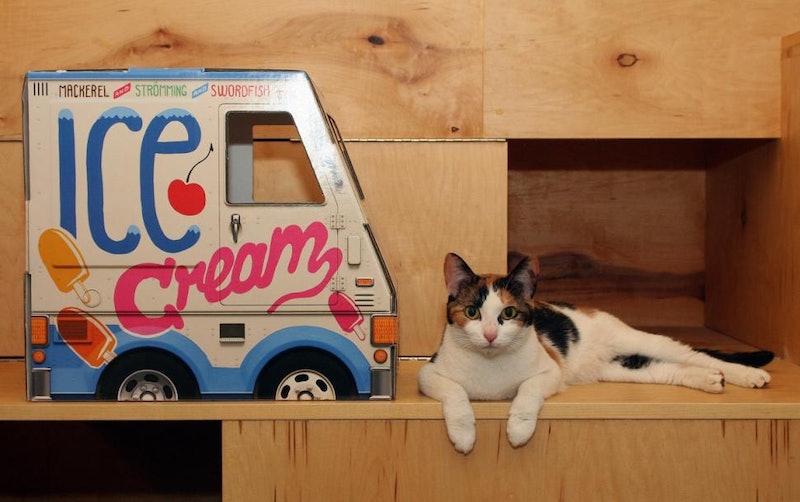 Cat lovers, the day you've been waiting for has finally come. New York City's first permanent cat cafe, Meow Parlour, opened its doors on Monday to hoards of eager guests who were lucky enough to score one of the limited available slots. As a cat lover since I was inside the womb (my mom let them sleep on her stomach), I was particularly excited about this event. My best friend growing up was a cat (his name was Leonard) and last year, I adopted my first two cats as a full-fledged adult; they're names are Lonestar and Princess Vespa, and yes, they have an Instagram account. So I made it my life's mission to be one of the first people inside.

I never felt luckier to have an advanced viewing. I got to play with these lovely creatures with only 10 other people around, and it was glorious. The public will not have it so easy, for the first few months at least. Once the reservation site went live, New York's felinephiles essentially broke the Internet. Visits cost $4 for 30 minutes of precious playtime and $12 for children accompanied by a chaperone. Slots are available Mondays through Thursdays from 12 p.m. to 8 p.m., and Fridays through Sundays from 12 p.m. to 10 p.m. They are currently booked until February, so reserve your slot soon if you don't want to wait until the summer!

Meow Parlour is located at 46 Hester Street on the Lower East Side, and is run by Christina Ha (owner of the Macaron Parlour in the East Village) and her partner Emilie Legrande. Both long-time cat owners, the duo came up with the idea of combining their love for sweet treats and sweet kitties. And if you happen to find your cat mate, which let's face it, is easier said than done in this fast-paced metropolis, you can actually adopt him/her through the wonderful not-for-profit cat rescue organization KittyKind!

Right around the corner from Meow Parlour is the Patisserie, which sells coffee and pastries you can take inside the cat cafe. Don't worry — All the treats are cat-friendly in case the cats eat any of your crumbs (you shouldn't flat out feed them though, they're watching their figures.)

Now, even though my love for cats would fill the deepest oceans, I am still rather picky when it comes to taking one home. So I got to know Meow Parlour's seven handsome residents. Here's a rundown of who you'll meet:

Squinkles is a Calico female who knows she's hot sh*t. She's got a gorgeous, soft coat, haunting green eyes, and she loooooves strutting around letting people photograph her. We talked for a bit, but I always got the feeling she had more important places to be, because she kept looking over my shoulder at the feather cat toy behind me. This girl's got it going on, but know you'll likely be holding her purse at movie openings.

Kris plays it real cool regardless of the situation. You could be snapping pictures of him, tapping on the table trying to get his attention, or throwing sparkly balls in his face, he could not care less. I admired his aloofness, but felt like I couldn't make a real connection with him unless I was holding a catnip-laced mouse, and let's face it, that's not real love. If you like a dude who's handsome as all get out, and definitely does not wear his heart on his sleeve, then Kris is the feline for you.

Lucky Lemon is the king of everything. Wherever he goes, there appears to be a warm light surrounding him, and I'm pretty sure it's not his lovely orange coat. He was a little standoffish at first, only allowing me to look at him, but eventually he warmed up when I suggested a game of catch the fish. I have a feeling he's a bit of a Peter Pan, never wanting to grow up, and always surrounding himself with lesser lost cats (in his opinion). Plus you can't ever get him to talk about anything but himself, and his new shoe box (don't get him started unless you have two hours).

Ah, Marty. Marty is such a fun-loving guy, but he's always getting into trouble. Every time I turned around he was burrowing in someone's coat, jumping on his friends, or trying to get out the door. Also whenever I tried talking to him, he was like, "hold on, I gotta say hi to this guy," and would proceed to chat it up with a friend about the latest ball game or whatever. I get the feeling he plays A LOT of video games. If you go with him, be prepared for some adventure dates that could end up with you both sleeping it off in the drunk/catnip tank.

Julian is a dashing grey and white spotted boy who leads you on and then goes and hides in his cat hole where I assume he's writing bad poetry. He's cool and interesting, and he works part-time on the hamster wheel in the back room, so you know he's super athletic. We were having a great conversation about grain free cat food, when he just up and left to go "think." I don't know what I did, Julian, but know when you're done thinking, I'll be waiting.

I think Spot was pissed I was chatting up her brother Julian so much. I purred at her for a few minutes, and she sort of chilled out. I don't blame her for being protective. They're practically twins, and that bond is ridiculously strong. It's always bros before hoes, right?

Then there's Liza. Liza quickly became the love of my life, even though we didn't hit it off right away. In fact, when we first met, she seemed to be involved with someone else, but that didn't last long. Let me break it down for you.

Words cannot express how I feel about this cat. How can one describe purrrfection? We just clicked, and for the next 15 minutes (what was left of my time slot) we could not be apart. She's a goddess with the softest grey stripes I've ever had the privilege to touch. She's quite gregarious, but definitely opened up to me more than anyone else there. Behold, our selfie:

I even stole a brief, but very special kiss.

She was crushed when I told her I had to leave. She refused to watch me go.

I'll admit I cried a little. It's unlikely my cats will forgive me when I come home smelling like her. I hope she'll call. No, I know she will. You don't make a connection like that everyday, right? RIGHT?!

Love makes you do crazy things. Come find your own Liza (or take the original if I haven't already) at Meow Parlour — slots are currently still available starting February 2nd, 2015.