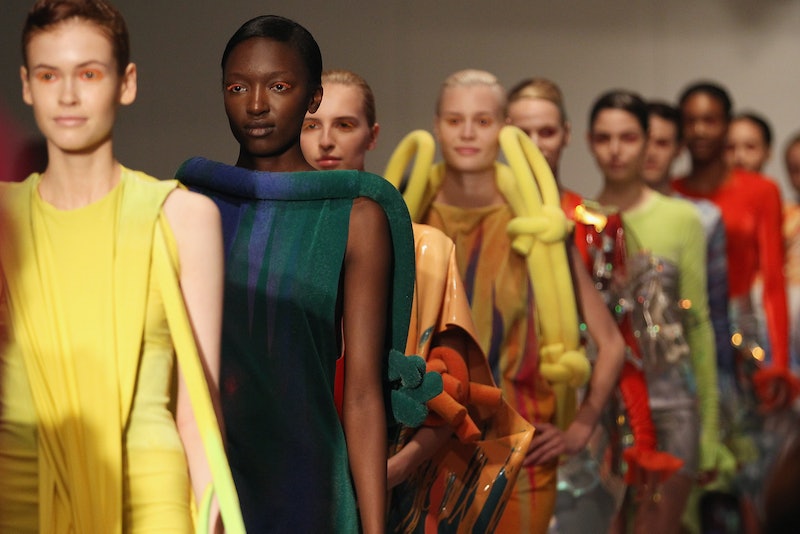 Think the magazine world is diverse with its cover stars, which often feature models, actresses, and celebs in both solo and group shots? Well, if you do, you are operating under a serious misconception. The Fashion Spot conducted some detailed research on racial representation on magazine covers in 2014, noting that out of 611 total covers across 44 major print publications, models of color were featured on only 119 magazine covers this year. White models, however, were featured on 567 of the covers.

Wow. Just wow. There's no need to bust out the calculator. That's an obvious and startlingly low stat. So it's not just Fashion Weeks that are scrimping on diversity.

This magazine-cover report defined models of color as those who "appear to be nonwhite or of mixed backgrounds." So while that's an alarmingly small number for an industry that claims to celebrate diversity of cultures, looks, and backgrounds, there's even more bad news. Several publications didn't include any models of color on covers…at all.

Who are the biggest offenders? Harper's Bazaar in the U.S. and in the U.K., Vogue U.K., Vogue Paris, Teen Vogue, LOVE, and a few other titles were completely devoid of models of color.

Go ahead. Let out the sigh of disappointment. I already did.

Some other general facts and figures that will make you shake your head? The Japanese and Korean editions of Vogue opted for white models on most covers, with Japan's version using one Japanese model all year. That's problematic, since the magazine is targeting Japanese women, their likes, and their looks, but it's not using Japanese women to relay that very message. That's confounding to me, and likely even more confusing to the reader.

Vogue U.K. has not had a solo woman of color cover in 12 years. Supermodel Naomi Campbell, who is of English descent, was the last woman of color to get her own cover, and it was over a decade ago. You'd think Jourdan Dunn, who is such an It model of her generation, would have commanded her own cover this year. But that did not happen.

Meanwhile, Cara Delevingne and Kate Moss each got two covers! Yes, two. No disrespect to those seriously talented ladies, but come on, Vogue.

That's gotta sting for Dunn, who deserves her own, since she is instantly recognizable, insanely popular, and freakin' gorgeous. And she is certainly on her way to becoming iconic like Moss. Sure, Delevingne is more visible thanks to her celeb status, since she is always out and about, and with her celeb besties. But strictly on the job front, she and Dunn are indeed peers.

In 2014, given all the lip service that is paid to diversity in our culture and in fashion, it appears as though the practice doesn't follow through.