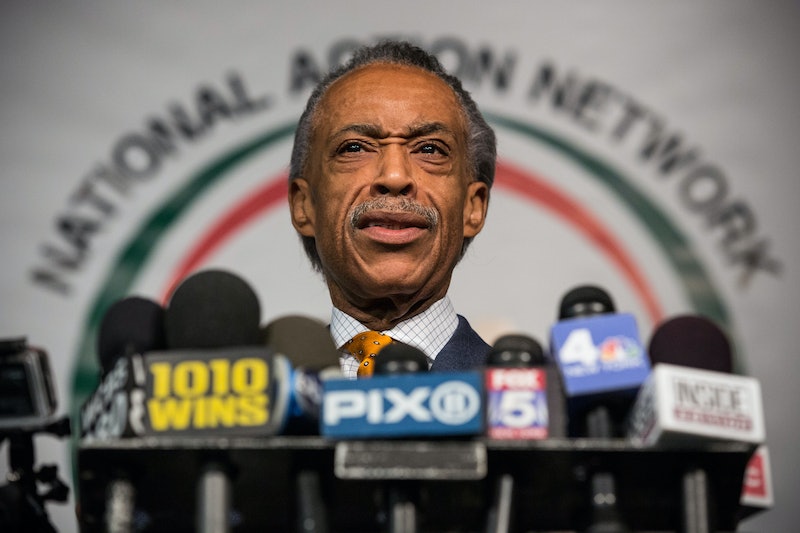 Al Sharpton has been a constant presence during the months-long demonstrations sparked by the death of Michael Brown in August. The reverend has been at the forefront of what has been dubbed the Black Lives Matter movement, but recently his leadership may have taken a more controlling turn. At the Justice For All march in Washington, D.C. last Saturday, organized by Sharpton's National Action Network (NAN), the civil rights leader hinted at a despotic control over the movement. Sharpton and NAN blocked demonstrator Johnetta Elzie from speaking, as well as other prominent youth leaders in the movement. The young activists had to take matters into their own hands just to be heard.

The Justice For All march, which emphasized peaceful organization, had a set list of speakers that did not include Elzie, fellow activist Erika Totten, and other important figures who were integral members of the movement's early stages in Ferguson, when it was largely a grassroots movement.

Elzie, who had been tear-gased in the initial protests after the death of Michael Brown, told website The Root that when she and Totten tried to join the other speakers, they were told by NAN officials that they needed a VIP pass. "If it is a protest," she told The Root, "why do you need to have a VIP pass?" When Elzie finally made her way to the stage and began talking, the march organizers cut her microphone.

Though Justice For All emphasized peaceful demonstration, not everyone saw the stark contrast between Saturday's march and the demonstrations led and driven by young activists around the country as a positive quality. Angered by NAN's refusal to let the grassroots activists, with whom the movement originated, speak, many took to Twitter to criticize Sharpton for essentially monopolizing and corporatizing the Black Lives Matter movement.

Among the most outspoken was Elzie herself.

Others echoed the same sentiment and questioned Sharpton's agenda and role in the movement.

The march, which was attended by roughly 10,000 people, was not completely defined by this unfortunate new divide. The most emotional moment of the demonstration was when the family members of Brown, Garner, and others who were killed by the police spoke to the crowd. Lesley McSpadden, the mother of 18-year-old Brown, thanked the crowd for having her back, while Garner's mother, Gwen Carr, told the marchers, "This is a history-making moment." And Garner's widow, Esaw Garner, urged the crowd, "Let’s keep it strong, long and meaningful."