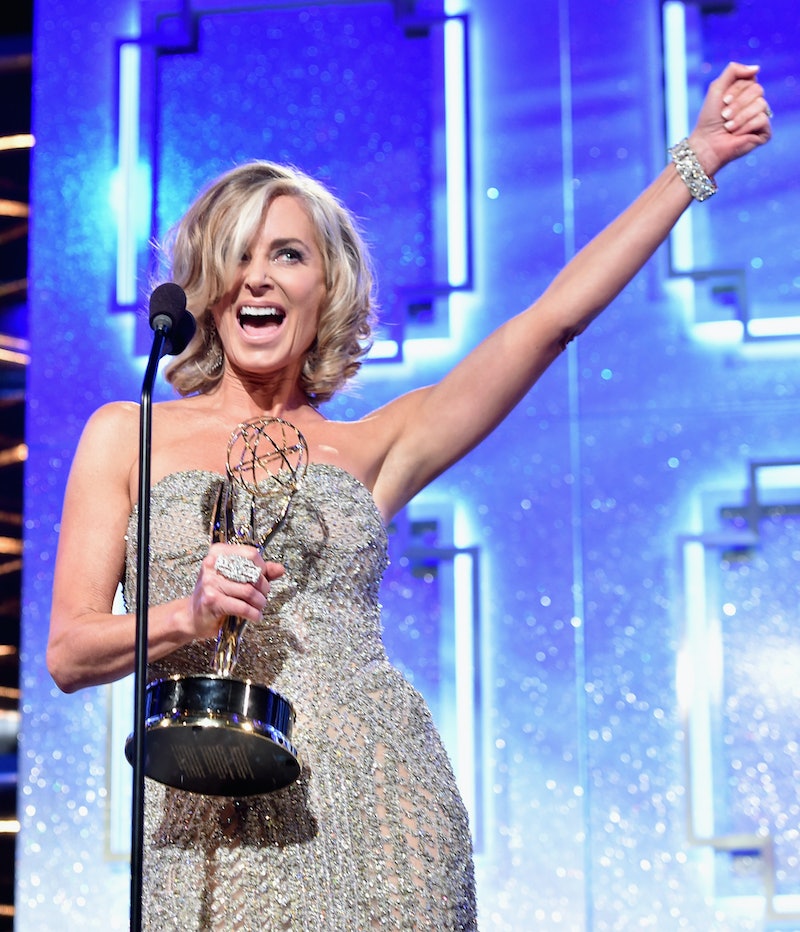 The newest Real Housewives of Beverly Hills star is already used to the high levels of drama. After all, Eileen Davidson quit The Young and the Restless — twice. Yep, not once, but two different times. Davidson got her start working on The Young and the Restless, a daytime soap opera, playing Ashley Abbott, the young ingenue returning to Genoa City, hoping to distance herself from her family, who basically owned the town… by moving to their home and working for their company, which only makes sense in the world of soaps. When the show started in 1982, she was fresh out of college and just as skilled at pretending to be a chemist as she was beautiful (and young, and restless).

And while all that was going on in The Young and the Restless, there were just as many soap operatic events going down behind the scenes. Actually, the story of Davidson's tenure on daytime soaps would make for a pretty eventful daytime soap. By the way, brilliant idea: pitch a soap-within-a-soap to every network. That idea would make MILLIONS... of people start watching soap operas again, which would probably net a pretty good profit.

Years later, in 1988, Davidson decided to quit the show so she could pursue primetime shows and try to become a TV star. And just like every soap opera, she found her doppelganger: Brenda Epperson Doumani, who was working as a catering waitress. However, unlike every soap opera, instead of killing her or stealing her boyfriend, Davidson recommended that the Young and the Restless producers hire Doumani to play Abbott. Somehow, the replacement went through, and Doumani played Abbott while Davidson was free to leave the show.

After a series of failed attempts at her own TV vehicles, Davidson returned to soaps, but this time joined Y&R's competitor, Days of Our Lives. On DooL, she played five different characters (and fans just rolled with it), which netted her an Emmy for Lead Actress.

But after that successful run, Davidson was feeling bold, so she dramatically returned to The Young and the Restless , where she resumed playing Ashley Abbott in 1999. The writers found new adventures for her for seven years, but in 2006, she was abruptly fired and her contract wasn't renewed because they claimed to have run out of material for her character.

But even that couldn't keep Davidson down. She took Abbott to Y&R's sister show, The Bold and the Beautiful. Classic. Soap. Opera. Move. Never let them kill you off before you're ready. And guess what? Now they've brought Ashley Abbott back to The Young and the Restless . All this is a lesson to the RHOBH ladies — never cross a lady who knows her soap operas. Davidson could steal their babies or expose their secret villainous identities without batting an eyelash.