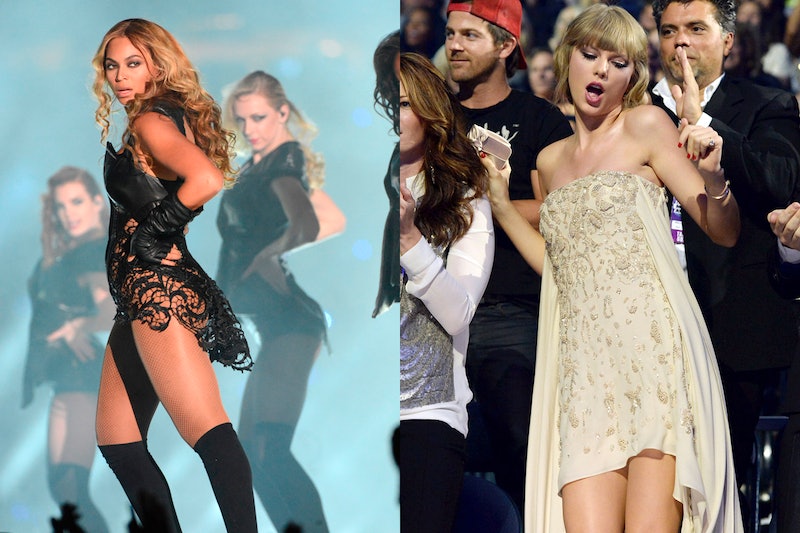 This weekend, while you were Netflixing Christmas movies wearing Costco-brand sweatpants, pop icons Taylor Swift and Beyonce were out dancing at a Justin Timberlake concert. Yeah, no big deal. And such a once-in-a-lifetime occurrence makes me wonder: Which one of those ladies is the ultimate Queen of the Dance?

Hear me out. Beyonce is a force of nature, a legend, a woman who has spent years perfectly executing complicated choreography. Taylor, however, has absolutely dominated the last few months, becoming the Beyonce of the latter half of this year. Plus, she's the unparalleled princess of Awkward White Girl dancing, making me look like a modern day Ginger Rogers comparatively. In ways, that's just as impressive, and even slightly more appealing. So finally, it's time to face the music and pit these two dancing queens against each other.

It won't be pretty. Lines will be drawn. Couples will break up, friends will burn bridges, families will sever ties. My mom is team Beyonce, my dad is team Taylor, I'm team Courtney Love. It's going to be intense, and it's going to be a close call. Prepare yourself, for the unhinged dance off between pop's highest royalty.

Round One: Best Overall Synchronicity

Beyonce's had lots and lots of practice with dancing in sync thanks to her Destiny's Child days. Taylor, however, has failed at keeping in time with about seven or eight different styles of dance. Amusing, but not in a good way.Verdict: Beyonce

Initially I didn't even think Taylor had a chance in this segment. There's only so much you can do with a bob haircut, but when she throws her head back, it's pure magic. However, Beyonce has a full mane that she's tossing about there, and you can't deny the beauty of those locks in motion.

Round Three: Move Most Likely to Accidentally Knock Your Teeth Out

Basically, who would make you feel uncomfortable when you're dancing in a club? Beyonce works so hard at being perfectly choreographed that you'd definitely feel safe, if not incredibly inferior. Taylor, however, is almost guaranteed to elbow you in the face while you two are breaking it down.

Round Four: Signature Dance Everyone and Your Mom Has Done

I'm probably alone in this, but I feel like "Single Ladies" is a much treaded artifact that everyone from your drunk aunt to Sex and the City 2 has ruined. Hilariously, the "Single Ladies" move is most often perpetrated by the Taylors of the world. "Shake It Off," by contrast, is the fresh, reigning hit of the music world right now. Ultimately, though, aside from literally shaking it off, the dancing from that video is completely open to interpretation. The "Singles Ladies" moves are definitively and permanently ingrained in your mind, and will probably linger around weddings for many years to come.

Verdict: Beyonce, although I don't know if this is a round you WANT to win.

Oh gosh, it's hard to say. Beyonce has a lot of volume, but Taylor has sparkles. Verdict: Draw.

Beyonce is a lot of things. Powerful, beautiful, wonderful in, many, many ways. However "dainty" is low on the list of words I'd use to describe her. She just doesn't have the right waifish, fairy princess look that Taylor has. Plus, hand flutters are totally Taylor's thing.

Round Seven: Most Painfully Awkward and Mind-Boggling Move

There's not even a competition here. Yes, Beyonce's unflattering Super Bowl pics proved that if you capture it quickly enough, Beyonce is less than impeccable. However, there are just so many awkward dancing gifs of Taylor that I didn't even know what to do.

That's what it's all about, isn't it? In this case, we're going to have to judge based on quality as opposed to quantity. Taylor, of course, is dancing in the seat at virtually any and every Award show, with Selena Gomez, Karlie Kloss, or any of her other famous BFFs by her side. Beyonce, however, did a stylish chair dance with Lady Gaga in her prime, right before Born This Way made us doubt her credibility entirely. That's powerful stuff.Verdict: Beyonce

Your winner, ladies and gentlemen, the one and only Queen of the Dance!