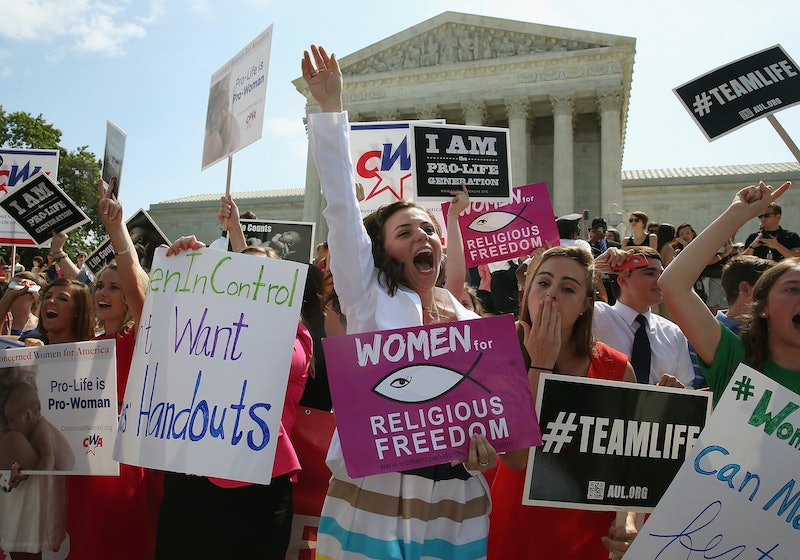 Reproductive rights activists saw a major victory on Monday: The Supreme Court declined to hear a challenge to Arizona's law on medication abortions. Passed in 2012, the Arizona law effectively acts as a ban on pill-induced abortions, which are typically performed up until the ninth week of pregnancy. Now that the Supreme Court has declined to take up the case, Arizona women who live in the state's rural areas will continue to have access to safe and legal abortion — without having to drive hundreds of miles for the procedure.

Although it's not an outright ban on medication abortions, the Arizona law would have prevented most of the states abortion clinics from issuing the medication. The law blocked non-FDA use of the so-called "abortion pill," Mifeprex, which is actually a combination of two different medications. FDA guidelines state that women who take the two pill doses must make three separate trips to the clinic: one trip to take each pill, and a third, follow-up trip two weeks later.

However, most abortion providers in the United States now use "alternative" or "evidence-based" protocols when providing medication abortions. Instead of requiring a patient to travel to the clinic twice, physicians now provide patients with the first pill dosage at the clinic, then allow patients to take the second dosage in the privacy of their homes.

According to the Guttmacher Institute, 83 percent of abortion providers were using these evidence-based protocols as early as 2001, but the FDA has never revised its guidelines. Meanwhile, medical associations such as the American College of Obstetricians and Gynecologists, which filed a brief supporting Planned Parenthood in the Arizona legal challenge, approve of these alternative abortion-pill methods. ACOG has called bans on medication abortions "bad medicine."

Planned Parenthood clinics in Arizona would have been forced to stop providing medication abortions under the 2012 law, the organization said. Planned Parenthood Arizona, which operates the sole clinic in northern Arizona, said access to legal abortion would have been severely impacted in the vast region, leaving northern Arizona women with a 321-mile round trip ride for an abortion procedure. Nearly 70 percent of counties in Arizona lack an abortion provider, according to the Guttmacher Institute.

Politicians are not medical experts — but politicians have written this law with the ultimate goal of making safe, legal abortion hard or even impossible to access. We are pleased that the courts are recognizing that these unconstitutional laws hurt women and block access to safe medical care.

Nancy Northup, president and CEO of the Center for Reproductive Rights, added in a statement on Monday:

By allowing to stand the Ninth Circuit’s strong decision blocking this underhanded law, the U.S. Supreme Court has ensured Arizona women will continue to have the same critical and constitutionally protected health care tomorrow that they have today.

Earlier in 2014, the Ninth Circuit Court of Appeals enjoined the 2012 law from being enforced, reversing a ruling from the lower courts. The Ninth Circuit's ruling will stand as the legal challenge goes back to the lower federal courts.