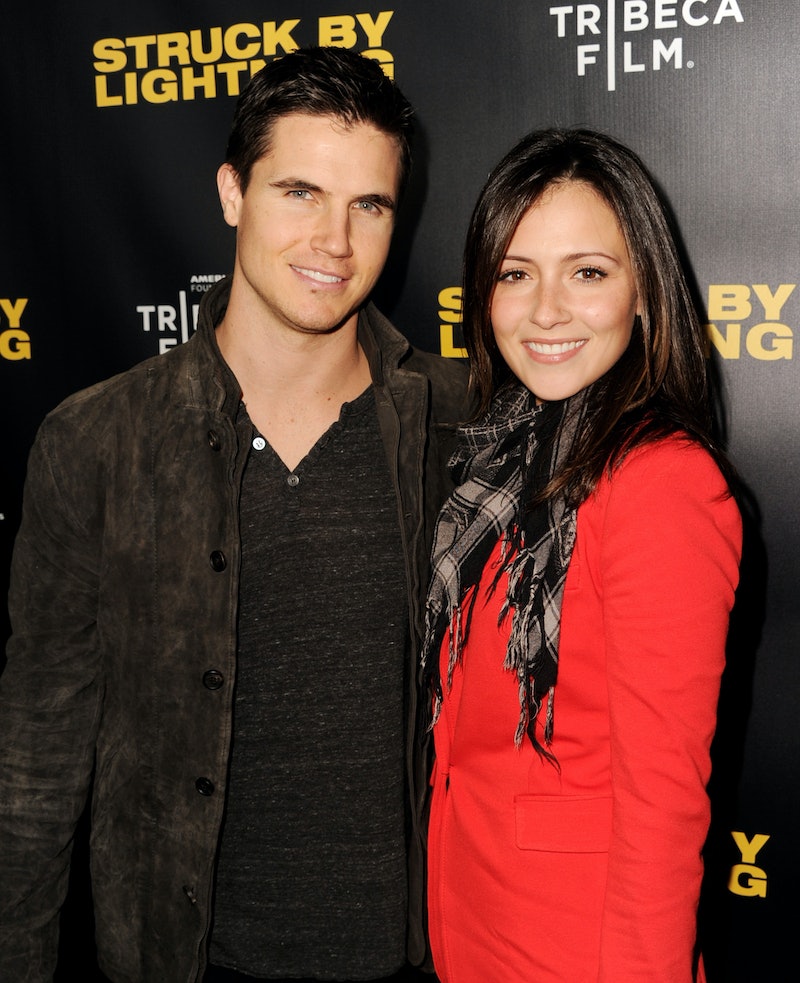 If there was ever a celebrity couple we should all be jealous of, it's Robbie Amell and Italia Ricci. Seriously, they are two talented individuals taking the TV world by storm, and in the words of Derek Zoolander, really really ridiculously good looking. One of the many qualities Amell and Ricci are admired for is the fact that they have a tight-knit relationship that's lasted for six years. In Hollywood that equals 42 years... Oh wait, I'm thinking of dog years, but, still, it's pretty much the same thing. Now, they're engaged and getting ready to say "I do," which has a lot of people wondering, "How did they meet?"

First, that's a very good question. Second, it's difficult to pinpoint the exact moment they met, because neither have really chatted about their meet-cute — based on what I can find. However, it seems that their love of acting (aka their careers) brought them together.

In 2007, they both had roles in American Pie Presents Beta House . I never saw this movie, so I have no idea if they shared onscreen time, but it seems like this is the project that brought them together. And that's not the only time they starred together. Back in the day, Amell starred in Nickelodeon's True Jackson, VP, where he played Jimmy Madigan. Well, Ricci also played a small part in the series. According to IMDb, in 2010, Ricci portrayed "Herself playing Dr. Trish Kavanaugh." Seeing as I never watched the show either, I have no idea if they even had any scenes together.

With that said and done, let's do some math. Amell and Ricci have been together for six years, which means they began dating in 2008. So, there's a good chance they met on American Pie in 2007 and it was love at first sight (FYI, Hello! Canada confirms this). Also, they're both Canadians, so maybe they knew each other from their homeland, eh? Bad Canada joke, I know.

I think it's important to note that before they got serious, Amell revealed to Seventeen that his crush at the time (the website does not list when the interview is from) was "a Canadian actress, Italia Ricci." OK. Stop it right now. Their love is a real-life fairytale and I can't handle it.

However they met doesn't really matter, because Amell and Ricci were obviously destined for one another, and I thank them for bringing even more love and cuteness to the world.

More like this
Colin Firth Revealed His Favourite Mr. Darcy (& No, It's Not Himself)
By Sophie McEvoy
'Doctor Who’s New Star Is Already Huge On TikTok
By Maxine Harrison
What’s New On Netflix: A Victoria Justice Rom-Com & The Return Of David Letterman
By Arya Roshanian
Shocked Fans & Former Co-Stars React To Ray Liotta’s Death At 67
By Grace Wehniainen
Get Even More From Bustle — Sign Up For The Newsletter