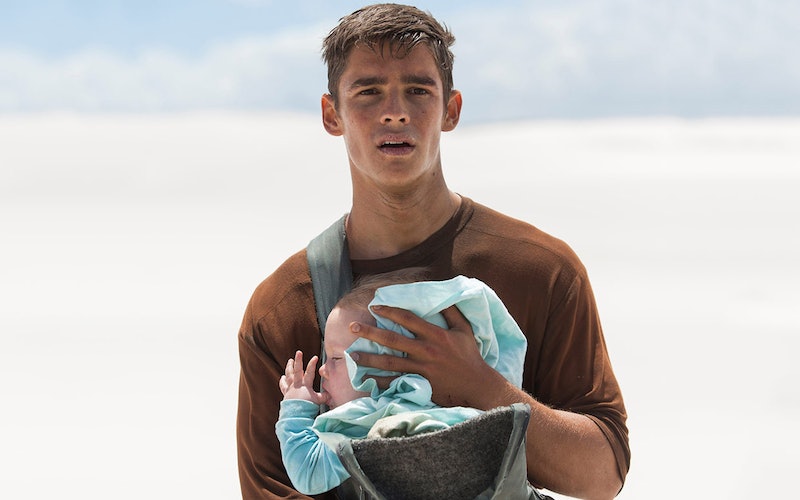 Like a lot of kids, the first time I read The Giver by Lois Lowry was right on cusp of adolescence, during that murky summer between 5th and 6th grade when you suddenly became responsible for some of your choices and were held accountable to them. I enjoyed the book because it was among the first I ever read that really made me think about human nature (not to mention sparking a Young Adult Lit obsession that still has no end in sight), but despite my love for it, I think a lot of the meaning was lost on me at the time. Because I am prone to re-reading books over and over, its significance was something that grew on me as years went by, and its message was something that I came to understand a little more with every reading. I doubt that I'm finished learning from it even now, and that future readings will undoubtedly reveal even more.

The Giver got a lot of hype this past summer with the release of the movie based on the book. Of course, we were all anticipating that it would get a Hollywood face lift, and it did. The characters were aged up, the circumstances were a bit more glamorized, and the romance was made a much more integral to the plot. I think there were some moments that the movie succeeded in capturing, and some where they fell short (an opinion author Lois Lowry seems to share). But ultimately, if you want to feel the magic of The Giver and the weight of its message, you have to go back to the book that started it all. Here are some of the quotes from The Giver that shaped our childhoods:

“Even trained for years as they all had been in precision of language, what words could you use which would give another the experience of sunshine?”

Lines like that are deliciously satisfying, because they make you pause and put down the book for a moment to consider something. I think a lot of the time we are really swept up in trying to control circumstances, even trying to get nature to bend to our will for our convenience, and language is just one tool we use to control what is going on around us and give it some semblance of order. But reading this as a kid was one of the first exposures we had to the idea that there are beautiful and terrible things in the world that cannot be captured by words—not the simple, precise ones used in The Giver, nor the every day language we use today.

“What if they were allowed to choose their own mate? And chose wrong?”

The Giver's main emphasis is on the dual freedom and burden of choice: whether ultimately it is worth the peaks of pain and joy that they bring us, or if a lack of choice would make our lives easier. A lot of quotes from the novel deal with that theme, but this one in particular was striking in childhood because you were starting to get to an age where your vision of the future was more concrete and less hypothetical. By then, some of our parents had divorced, or weren't getting along; I have always been lucky to have two parents who love each other, but that is one instance where people chose right, compared to just as many instances where people have chosen wrong. This line made us think about the risks that we take, especially in regards to other people, because what is so crazy and amazing about the human experience is that we can't predict whether a choice we make will in the long run be "right" or "wrong." Nothing is that easily labeled. So would it be easier to let someone else decide, and assign the blame with them if it didn't work? Or take the full responsibility of it yourself?

"There was a time, actually—you'll see this in the memories later—when flesh was many different colors. That was before we went to Sameness. Today flesh is all the same."

This was an especially haunting notion to consider. Lowry makes it clear in the novel many times that "sameness" is emphasized, that it is rude to point out anyone's individuality, but you don't get a sense for just how extreme it is until the Giver says this. As kids, it was your first indication that what was happening was inherently wrong. Up until that point, it seemed like a weird utopian society you had doubts about, but this brought on implications of genocide—racism for the sake of "ending racism". The way that Lowry presented these quotes to us through the Giver, though, was unbiased and blunt. It gave the reader the ability to come to the conclusion that this was wrong independently, the way Jonas experienced it himself.

"We gained control of many things. But we had to let go of others."

This is another comment by the Giver that gives insight into consequences of both having choices and not having choices. When you think about it in your adulthood, you realize that so much of both the pleasure and the agony in your life stem from making choices. There is something comforting in the routine of even picking products on a grocery store shelf; there is pleasure in picking out a new pair of shoes; there is complete torture in deciding whether or not to leave a job if you think one is better suited to you. The higher the risk, the more the stress, and the bigger the reward, or the consequences. In this instance, the Giver demonstrates just how intricately woven our feelings are with our choices, that the absence of one means the absence of the other.

As a kid, it seemed strange to me the first time I read this. It's practical to teach children not to lie, for their own safety more than anything, so reading about someone given blatant permission to do it seemed unsettling at first. But what I love about this line is that it shows that lying is just one more part of life that you can't assign inherent goodness or badness to, that depending on the situation and what motivates it, it can be for better or for worse. And you have to take on the responsibility for what you choose to lie about, which Jonas learned the hard way both in the times that he lied and times that he didn't.

"He wept because he was afraid now that he could not save Gabriel. He no longer cared about himself."

The quote highlighted the most human part that was stripped away from the other members in the society: the ability to care about someone more than you care about yourself. This was the first true demonstration of unconditional love, and it took taking Gabriel away from society for Jonas to fully feel it. We all take for granted the unconditional love that we feel and receive for our friends and family, but this was Jonas's first experience with it, and you felt its impact right along with him.

"For the first time, he heard something that he knew to be music. He heard people singing. Behind him, across vast distances of space and time, from the place he had left, he thought he heard music too. But perhaps, it was only an echo."

This ending is so powerful that even as a kid, I was never angry that it was open-ended. I wanted it to be. There is some comfort in the idea that Jonas is either alive, or that he goes to some place happy when he dies, and either way, it would have seemed too neat and tidy to seal his fate in a novel that so emphasized the uncertainty of choices. We never truly know if Jonas was "right" or "wrong" in his choice to leave with Gabriel, or if it did anything to solve the problems of the society he left. We only know that Jonas got to make a choice, and even if that choice ultimately led to their deaths, it was the conviction that he felt for his choice that made him human.

More like this
16 Novels That Paint A Realistic Portrait Of Abortion
By K.W. Colyard
5 Gripping Books To Read From Women’s Prize For Fiction Winner Ruth Ozeki
By El Hunt
13 Summer Solstice Quotes To Celebrate The Longest Day Of The Year
By Sadie Trombetta
Ottessa Moshfegh Is Happy To Be Your “It” Girl
By Arya Roshanian
Get Even More From Bustle — Sign Up For The Newsletter