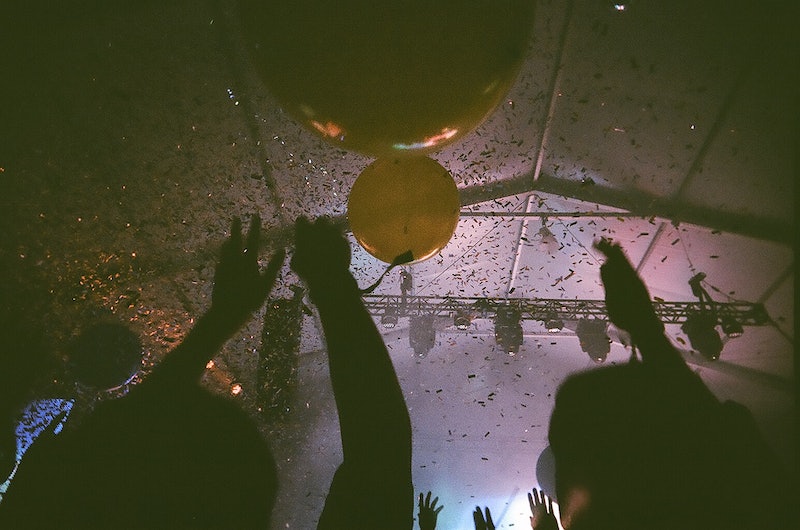 Although there are always great (and, um, terrible) things about each month, there’s something undeniably poignant about January. As the very first month of the new year, January is full of promises and resolutions — ones that will likely be broken (can you really get through that stack of Penguin Classics you’ve been meaning to read since high school? Really?), but that are refreshing nonetheless.

But I can promise you that, on the literary front at least, your eager January expectations will be met — and then some. When we sorted through this slew of of exciting new titles from gifted writers at the Bustle HQ, the depth of these writers’ talents and the scope of these thrilling stories floored us: deciding on “the best” was a tough job (but someone’s gotta do it).

There’s something here for everyone, from polished short story collections to confessional memoirs to experimental coming-of-age sagas; from the hyped to the under-the-radar — and I pinky-swear that you’ll find something you’re gonna love here, so you can kick off your new year reading routine right.

Now, get the confetti out of your hair, and pick up a book.

Her, Harriet Lane’s second novel, takes the girl-on-girl revenge arc to thrilling and sophisticated new heights. It’s an understated psychological thriller, both heart-racingly fast-paced and as taut and suave as the two stylish North London women around whom the story orbits. When Emma, a stressed older mother to a rambunctious toddler, and privileged Nina, a successful painter and mother to a 17-year-old daughter, meet through random (yet fated) circumstances, an instant attraction binds these two disparate women together. But things are never what they seem, as Lane deftly reveals through chapters alternating between the two women’s perspectives: what may seem innocent on the surface can belie seriously dangerous motivations beneath. Warning: This affecting novel may force you to momentarily question all the female relationships in your life.

Ever heard of the conjoined twins Violet and Daisy Hilton, vaudeville act-turned-grocery store clerks who died of the Hong Kong flu? Or how about Norma Millay, the great Edna St. Vincent Millay’s shadowed, but equally talented, sister? Or Allegra Byron, Lord Byron’s bastard daughter? I hadn’t heard of them either until picking up Almost Famous Women: Stories, Megan Mayhew Bergman’s seriously hyped short story collection. This collection — fresh and spunky, heartbreaking and deftly controlled — imagines fictional accounts of real, fascinating women who lived and worked and performed on the edges of society, and whose stories have been buried beneath those of less challenging — and more historically beloved — women. Besides providing an enlightening lesson in alternative history, Almost Famous Women is a pleasure to read: the stories are sometimes disturbing, and oftentimes tragic, but always gorgeously wrought.

Don’t be fooled by this book’s fog-drenched cover, which makes Descent look like something your mountain-bike-loving Dad might pick up at an airport Hudson News. True, what’s inside the misleading cover is a Colorado Rockies-based abduction thriller, but what propelled me through this mesmerizing story was less the spooky narrative than it was Tim Johnston’s utterly beautiful, meticulously crafted prose. While the overarching story involves the disappearance of the Courtland family’s 18-year-old daughter, the meat of the story is an intimate portrait of the tragedy’s aftermath, and how Caitlin’s disappearance forces her family to unravel both physically and emotionally. You’ll get a boost of adrenaline, for sure, but Descent is packed with a poetic pathos not commonly found in mainstream crime fiction.

The first thing I thought when reading Thomas Pierce’s short story collection Hall of Small Mammals was: “Wow. This should be in The New Yorker.” I am either psychic or incredibly negligent (or both?), as the back of the book proudly exclaims, “As seen in The New Yorker !” This is hardly to deride Thomas Pierce’s stories as predictable or rote: rather, I was floored by Pierce’s balance between authoritative control over his craft while maintaining an authentically quirky sensibility. There’s a weirdness to each of these stories — all of which have something to do with, you guessed it, hijinks involving small mammals, like the cloned, dwarf woolly mammoth that appears in the first story — that makes these otherwise glossy narratives accessible and lovable. In these stories, Pierce shows reverence for the Southern Gothic tradition on which he draws, while also bringing in a fresh dose of modern irreverence. He's a huge talent — one to keep an eye on.

The Girl On the Train by Paula Hawkins (Jan 13; Riverhead)

I'm calling it now: The Girl on the Train is the next Gone Girl. Paula Hawkins’ highly anticipated debut novel is a dark, gripping thriller with the shocking ending you crave in a noir-ish mystery. When a young(ish) London woman (think Bridget Jones, minus all the humor) sees something she shouldn’t outside the window on her daily train commute, she finds herself inextricably entangled in a chilling murder. Compulsively digestible, The Girl On the Train makes for the perfect beach/train/plane read (seriously: take this with you on your next vacay), but the high-quality prose and intricate plot will still make you feel like you’ve done something good for your literary education.

Miranda July: You either love her or you hate her. Admittedly, I wasn't on Team July until I found myself surprisingly engrossed in her forthcoming debut novel The First Bad Man. In typical Miranda fashion, The First Bad Man is a disorienting mash-up of tongue-in-cheek social commentary, a celebration of oddball anti-heroines, and an embarrassingly honest look at the obsessions and entitlements we all (subconsciously or not) carry with us. I found myself laughing and cringing in equal measure, and even if I don’t totally understand everything July is trying to say or do here, I’ve become a believer.

One cold and gloomy night (the best kind of night), I tore through Sarah Gerard’s buzzed-about debut novel Binary Star in a matter of hours; and, that night, I was plagued by nightmares. Not because Binary Star is a murder-mystery-horror-thriller-etc. — but because the story’s deep horror lies in its utter reality. By turns a lyric poem, a heart-wrenching confessional, and a clinic in astronomy, Binary Star is told from the blurry perspective of a dangerously ill anorexic woman as she and her alcoholic boyfriend take a cross-country road trip. The deeper the dysfunctional pair travel into the heartland of this massive country, the more steadily they each disintegrate from the inside out. Along the way, the lost souls latch onto vegananarchism, a youth-driven revolutionary movement. I was blown away by this deeply unsettling, but breathtakingly beautiful story: with the grace of a poem and the attitude of a punk anthem, Binary Star is an unusual treasure. Sarah Gerard is a young writer on the rise. She has a voice you have to hear to believe; and, lucky you, you can read an excerpt here.

In Outline, her unusual eighth novel, the distinguished writer Rachel Cusk takes an elegant risk. Organized as a series of conversations, the reader can only parse information about the almost-silent narrator through the little she reveals about herself with, and her reactions to, her loquacious, mostly male counterparts. The result is a highly sophisticated and deeply affecting look at modern womanhood; but for all its introspection, there’s no shortage of worldly, self-deprecating wit, making this read equal parts intellectually challenging and distinctly pleasurable.

Deepti Kapoor’s debut novel, A Bad Character, is a coming-of-age tale as complex and gritty and frankly terrifying as Delhi, the city that forms its backdrop and informs its riveting tone. Idha, a 19-year-old college student, leads a relatively unexciting life in Delhi, where her father sent her to live with a wealthy aunt after the death of Idha’s mother and his own absconding to Singapore. It’s here, in the city of her exile, that Idha meets her nameless boyfriend: he’s an ugly, American-accented, charismatic junkie — we’re told from the beginning that he dies by Idha’s 21st birthday — and Idha becomes addicted to him and his doomed promises of adventure. The non-linear story takes cues from moody European New Wave cinema and Baudelaireian drug-fueled prose poetry, but its mongrel influences makes for a cohesive, and thoroughly modern, tale.

In The Sweetheart, debut author Angelina Mirabella delivers a story as spunky and colorful as its kitschy cover. In 1953, seventeen-year-old Philadelphian Leonie Putzkammer is a perennial misfit: her buxom, blonde, six-foot body contradicts the hesitant homebody beneath. She’s never found her place in the world. But after attending a wrestling match with her father, a newfound passion blooms; and an invitation from a renowned wrestling promoter to attend Joe Pospisil’s School of Lady Grappling in Florida sets off Leonie’s legendary wrestling career. The Sweetheart is a smart and touching romp through the history of women’s wrestling, and it just may give you more respect and understanding for those spangly WWE Divas.

Michelle Tea is like the gutsy, uber-smart, rebellious older cousin we all wish we had; and, with her forthcoming memoir How to Grow Up (the prolific writer’s fifth memoir), you can indulge that fantasy in real time. While cult-hero Tea has addressed the gamut of hard-hitting issues, especially pertaining to fringe-dwellers — she’s outspoken about everything from queer culture to growing up poor to struggling with alcoholism — in this memoir, Tea tackles a sticky matter that everyone can relate to: becoming an adult. In her characteristically candid — and healthily self-deprecating — approach, Tea recounts her long, tumultuous journey towards full-fledged Adulthood, offering advice to all of us fellow, struggling adult-hopefuls. Some chapters, like “Fashion Victim,” an ode to Tea’s sartorial obsession, work as standalone essays; but this compulsively readable collection is so damn good, you’ll tear through the whole thing (and possibly take notes along the way).