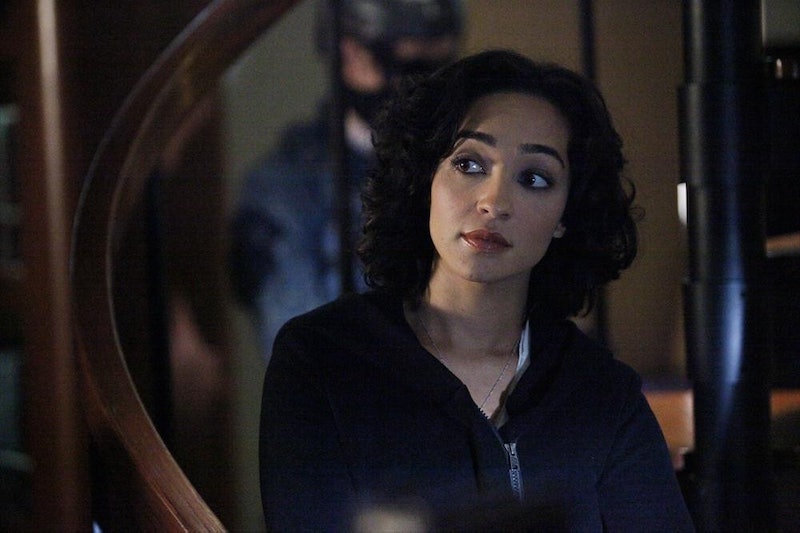 The Agents of S.H.I.E.L.D. winter finale revealed that Skye is Daisy "Quake" Johnson, but she wasn't the only one affected by the terrigen mists. We can officially call them terrigen mists now, right Team Inhumans? Anyway, what did Raina become on Agents of S.H.I.E.L.D. ? We only saw partial glimpses of what the antiheroine became, and it was tantalizing. For a few weeks, I wondered if they were creating an original character with Raina and drawing from the backstory of Storm — seriously, some of their history matches up. Both characters were pickpockets taken in by questionable father figures. It's all very Dickensian. However, now that we know Skye can cause earthquakes, it would be overkill to have two natural disaster related individuals in the mists.

Raina has always been someone who walks into a room and knows she has all the power, and the ability to sway anything in her way. Part of that is her appearance. She’s always adorned herself in flower dresses, she’s always perfectly put together, and she’s a beautiful woman. Now we’ll see how this transformation affects her.

It seems like she and Skye will take opposing points of view, both to each other and in contrast to how they approached this process in the first place. Hopefully, now that Raina has exposed herself to the mists, she can join the S.H.I.E.L.D. Agents and fight the good fight, for once! It's all I want! However, I have a feeling that if she's upset with her powers, she'll go running back to Cal (Skye's father — he has a name now, remember?) well before Daisy does.

One candidate for Raina's identity is the Inhuman princess Luna Maximoff. She is the daughter of Quicksilver (who will appear in Avengers: Age of Ultron) and Crystal, who is sure to have an important role in the upcoming Inhumans film. The spiny bits on her face don't add up, however, Luna is an empath. She senses feelings, and Raina has the ability to manipulate emotions and "feel a room" already. Also, Luna's eyes turn gold as she gets her powers — which is exactly what we saw happening to Raina.

Squint, and you'll see another peek at what Raina becomes in the shadowy debris. She looks somewhat like a cat, or at the very least what Hermione looked like when she accidentally turned herself into half a cat with Polyjuice Potion in Harry Potter and The Chamber of Secrets. I might start calling Raina "Cat Powers," or at the very least, "Flower Powers." Could she be Tigra, a werecat also known as Greer? Or Feral, a mutant whose sister Thornn has fur as well? There is also the Spider-Man love interest Black Cat, or Felicia Hardy. She is also a reformed thief and did eventually develop some feline powers. Raina looks, to me, a little bit like a female version of the mutant Beast. I wonder if she'll be able to control her transformations.

There is a Raina in the Marvel Comics Universe, and one of the things that defines her is her claws. Could Ruth Negga's character have become her comic namesake after all? I doubt it. The character described is too far from anything that Agents of S.H.I.E.L.D. has touched on. Plus, this Raina is distinctively an alien, which our Raina is not. Whatever or whoever she is, it looks like Raina will be playing a bigger role on the ABC series, and possibly the Marvel Cinematic Universe as a whole.