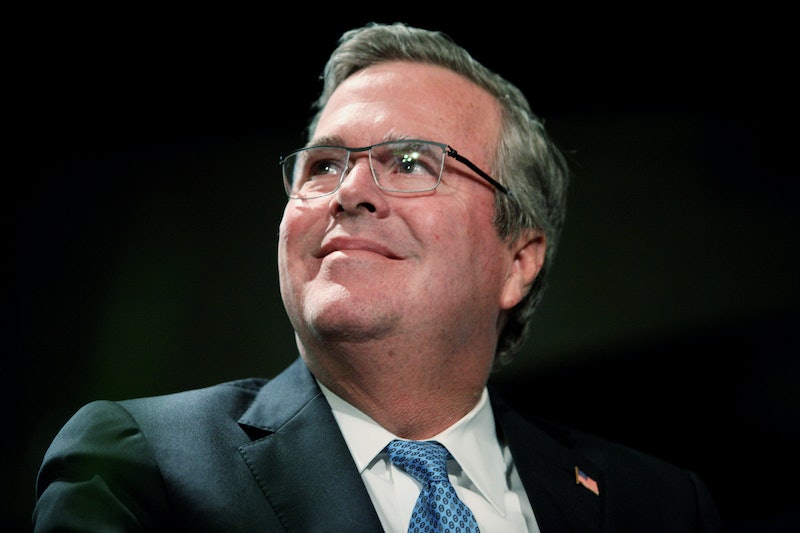 In a surprise move Tuesday, former Florida Governor Jeb Bush announced on Facebook that he's in the running for the Republican presidential nomination. He wrote that he's "actively exploring" a presidential run, which means he's almost definitely running. He's only the second candidate to officially announce his intentions — the first being little-known Democrat Jim Webb.

Bush announced his plans in a Facebook note that said some nice things about families and holidays, but not much of substance.

Like many of you, our family was blessed with the opportunity to gather together over the recent Thanksgiving holiday," he wrote blandly. "We also talked about the future of our nation. As a result of these conversations and thoughtful consideration of the kind of strong leadership I think America needs, I have decided to actively explore the possibility of running for President of the United States.

So would a third President Bush be good for America? Well, it depends on whether you're a fan of George W. Bush's presidency, because Bush is a whole lot like his older brother. He's a staunch conservative on everything except immigration, and he's a foreign policy hawk who backed all of Bush's military interventions overseas.

We say no thanks. Here are nine reasons not to vote Jeb Bush for president — in case you needed them.

1. He'd Be Terrible for Women

Jeb Bush's views on women can only be described as backward. During his 1994 campaign to become Florida governor, Bush said that women on welfare "should be able to get their life together and find a husband." Is it really still okay to imply that marriage is a woman's only path to security?

He's also strongly against providing access to abortion, even if the mother's health is endangered. As Florida governor, he controversially asked a circuit court to appoint a legal representative for the fetus of a mentally disabled rape victim. He also sent state money to groups that advised women who sought abortions to continue their pregnancies.

2. He'd Be Another George W. When It Comes to Foreign Policy

Jeb Bush is a hardline interventionist on foreign policy and aligns himself with his brother George W. Bush and Vice President Dick Cheney. That makes him different from more libertarian Republican candidates like Rand Paul, who is totally against military interventions and famously filibustered against using drones overseas. Of course, Bush is only mildly more hawkish than Hillary Clinton.

As a young man, Bush smoked pot and grew his hair long. But he took an anti-drug stance as Florida governor, passing three-strike laws that sent cannabis users to jail. In 2014, he told Floridians to vote "no" to medical marijuana.

Bush championed a constitutional ban on gay marriage in 2006. In 2012, he was still against gay marriage, but his stance had softened. He told Charlie Rose that he doesn't think gay couples should be "sanctioned under the law" (i.e., married), but he also doesn't think they should be discriminated against. "If people love their children with all their heart and soul and that’s what they do and that’s how they organize their life, that should be held up as examples for others to follow because we need it," he told Rose.

Florida's infamous NRA-written "Stand Your Ground" law was approved by Jeb Bush while he was governor. It was the first Stand Your Ground law in the nation, and it's also the law that helped George Zimmerman to escape a conviction after he shot 17-year-old Trayvon Martin dead in the street. As governor, Bush also signed an NRA-approved enhanced concealed-carry law.

6. He's Joined at the Hip to Wall Street Bankers Who Tanked the Economy

Bush served on the advisory board of the investment bank Lehman Brothers. That's right, the now-defunct Lehman Brothers, whose risky trading triggered events that almost destroyed the global economy in 2008. He's now working as advisor to another big bank — Barclay's — and plans to stay in that role until the election.

7. He's a Conservative, Not a Moderate

Some conservatives are already blasting Bush as a moderate RINO ("Republican In Name Only"). But they're wrong: On almost all issues he's really, really conservative.

Here's Politico on why Bush is about as conservative as they come:

For religious conservatives...he pushed through legislation allowing him as governor to intervene in the Terri Schiavo right-to-die case...With all this on his résumé, Jeb Bush is now considered a moderate? A RINO? What more can conservatives want?

Bush's support for the Common Core education standards might be a deal breaker for voters of all stripes. The standards were originally championed by the Left, but they've become hated by conservatives and liberals alike. Parents and teachers say that students help to the standards are forced to take near-impossible tests with arbitrary and confusing requirements. In states like New York, where the Common Core was implemented this year, test scores plummeted and fewer than one third of students passed.

9. We Don't Need Another Bush

Even Bush's own mom — former First Lady Barbara Bush — doesn't want to see another President Bush. As she said in 2014, "We've had enough Bushes."