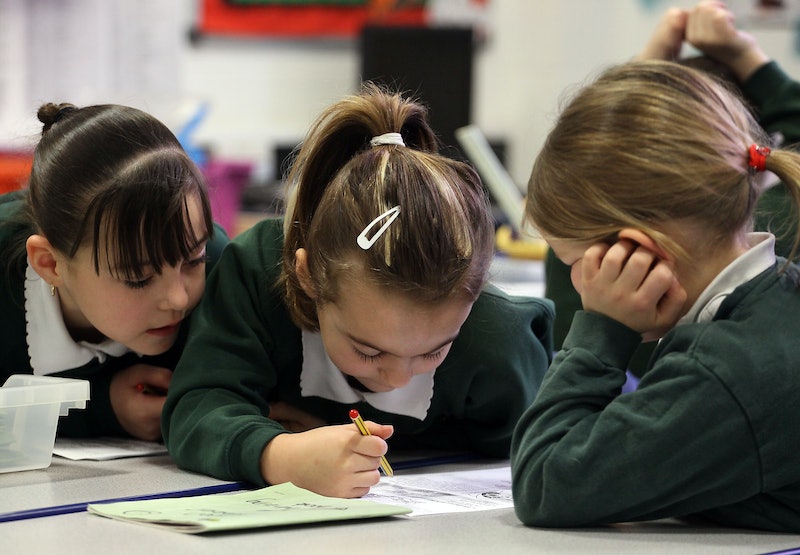 Were you just scrolling through your feed, like, “Damn, I wish there was a new story about a cool little kid way wise beyond his or her years…sigh…”? Well then you need to peep this heartfelt letter a girl sent her teacher after he came out. The nine-year-old’s teacher, Mr. R, struggled with telling his class about his sexuality — after all, heterosexual teachers talk about their husbands and wives all the time, nbd, but up until that point he'd been quiet about his private life. Because, you know, controlling a classroom full of kids isn’t hard enough already, imagine worrying about telling a group of adolescents something deeply personal about your life on top of that.

In an interview with Pink News, Mr. R said he used an anti-bullying lesson as a vehicle, asking students if they’d ever heard the term “gay” thrown around as an insult. Dishearteningly but not-all-that-surprisingly, most of the class raised their hand. He decided to tell them that he was gay “so they at least knew one gay person and hopefully explain that when people use that word they’re talking about me.” With the support of his headmaster, he revealed to his class he was gay.

Mr. R said, “The reaction was fantastic – there were a lot of gasps and shocked looks and some basic questions – do you have a boyfriend, etc – but after a couple of minutes they were over it and we moved on to the rest of the lesson.”

So a couple of days later, one of the girls in the class decided to write Mr. R a letter. Read it below, and try to contain your tears.

The reason why I say brave, is because you shared a personal secret, which was very brave.

You don’t have to feel scared because I know that everyone in the class feels the same way as I do.

Aside from her incredibly sophisticated vocabulary, the maturity of kids like this one continue to amaze me, even though I write articles on stories like these practically every week. Seriously, how is it that many children are more open-minded and mature than some adults I know? We should just let kids rule the world. Think about it: equality and mandatory naptime. It's decided; I’m voting for Kid President 2016.