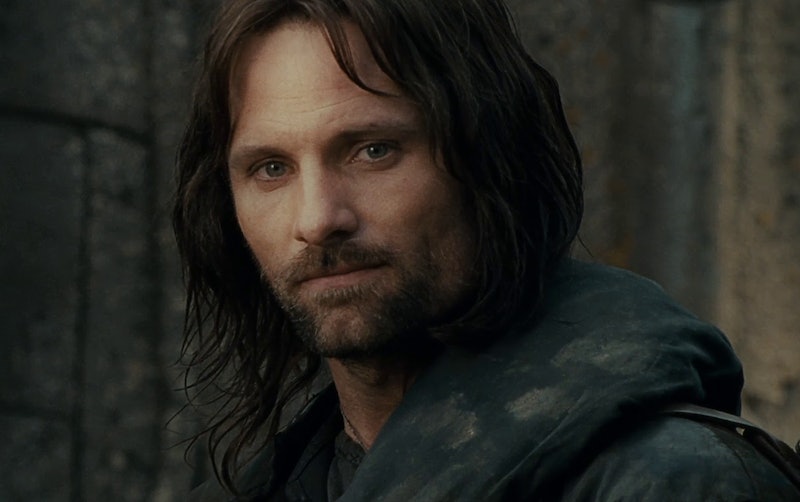 Warning: The following contains spoilers about the ending of The Hobbit: The Battle of the Five Armies. As we learned from the Star Wars prequels, seeing our favorite action and adventure heroes reimagined as angsty children is… never as appealing as it might seem. That’s why we should all be mighty glad that The Hobbit movies didn’t sink to the levels of Phantom Menace and rope in the likes of its yet unmatured Lord of the Rings warriors. Of course, Peter Jackson couldn’t exactly keep himself from making reference to the heroes yet to be. If you recall, The Hobbit: An Unexpected Journey revealed Gloin, one of its 13 Dwarf adventurers, to be the doting father of a prepubescent Gimli — Fellowship mainstay in the LOTR trilogy. The same antic is pulled in Battle of the Five Armies with the revelation of another name: Aragorn, played famously by Viggo Mortensen. But there are some potential problems with this shout-out.

To recap briefly, Aragorn is mentioned once at the very end of the film, during a conversation between Legolas (Orlando Bloom) and his father Thranduil (Lee Pace). After Legolas begs leave of the Elf kingdom, brokenhearted and hoping to find a new cause in which to invest himself, Thranduil suggests he seek out a ranger known as “Strider,” confirming his true name to be Aragorn. But that timing doesn’t quite add up if you consider the films canon with J.R.R. Tolkien lore.

Yes, Aragorn would have been around at the time of the Battle of the Five Armies’ conclusion… but he would have been about 10 years old. Aragorn was born in the year 2931 in the era known as “the Third Age.” Meanwhile, Bilbo Baggins’ (Martin Freeman) quest to reclaim Lonely Mountain alongside the Dwarves began in 2941, a mere decade later, and lasted approximately 13 months (he must have used up a ton of vacation days). This, when you consider the lengthy life spans of the humanoid creatures that occupy Middle-earth, would render Aragorn even younger in perspective.

But maybe he’s a quick learner? Well, according to Tolkien’s literature, Aragorn first earned the handle “Strider” in 2956, due to his efforts protecting various pastures in Middle-earth. Ergo, it wouldn’t be for another 15 years that he’d come to occupy the identity referenced by an apparently prescient Thranduil.

Of course, Aragorn and Legolas would eventually come to meet, but a bit of a ways down the line. The Fellowship of the Rings begins its story in 3001, at which point Bilbo would be approximately 111 years old, Aragorn/Strider a youthful 87, Gimli about 139, and Legolas just under three centuries in age. For Hobbits, Men of Middle-earth, Dwarves, and Elves, these numbers don’t exactly scream “post-retirement.”

While Jackson's version of Aragorn might not exactly sync up with that of Tolkien's writings, that doesn't mean we need to write off The Hobbit's cinematic lore entirely. After all, the movies could have gone the way of introducing a young Strider to the screen, allowing audiences to experience his "rise to glory" just as they did with Anakin Skywalker and Boba Fett.

See how much worse it could have gone?