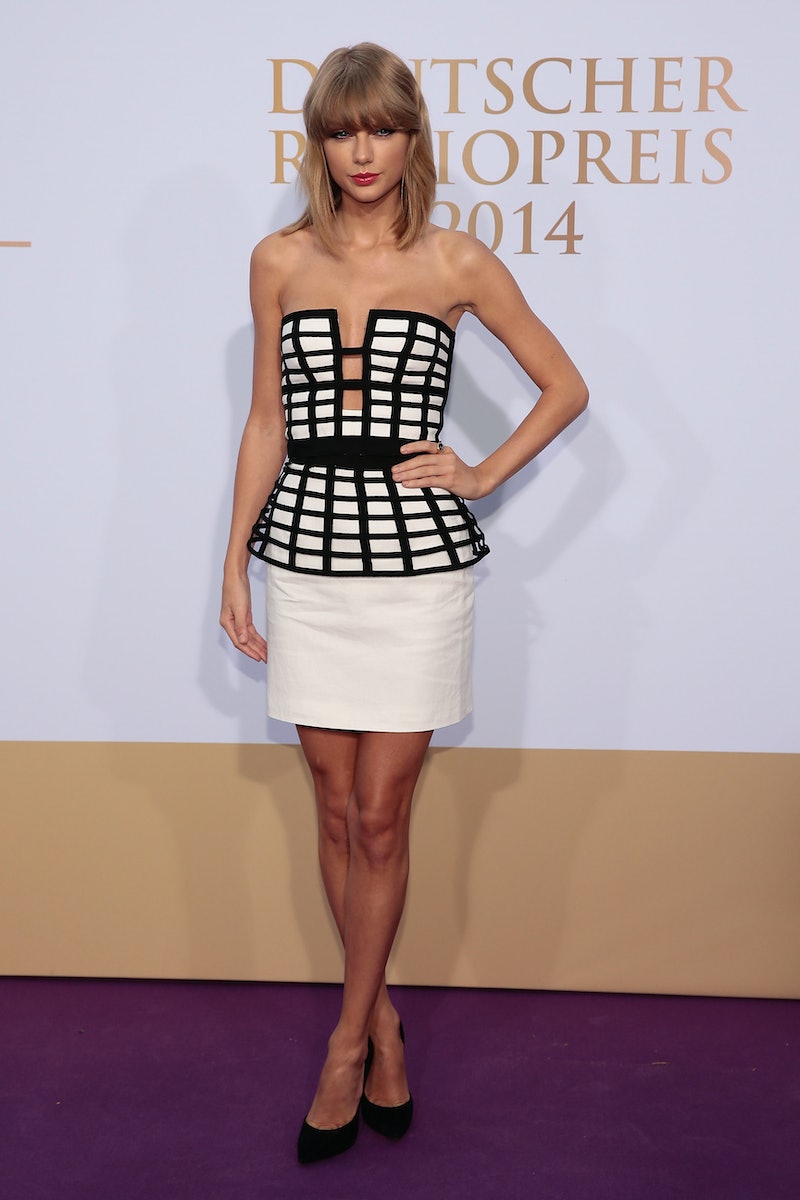 Taylor Swift had a breakout year, you guys. In case anyone was still wondering. I actually believe Swift's last 365 days define the very word breakout. And style icon and general badass girl about town. I am sure there are those among us who are experiencing a case of deja vu due to the fact that we likely waxed on about the power of Taylor Swift as 2013 came to a close. I also wouldn't bet against the notion that we carried on about her magical ways while saying our goodbyes to 2012. But that's because she's Taylor Swift, and the minute we think she can't outdo herself is the exact moment she does. Like a fine wine and Zac Efron, she just keeps getting better with each passing year.

America's sweetheart started 2014 off by chopping her long blonde locks, revealing a totally modern bob that made her look sassy and sophisticated, yet more adorable than ever. As it would turn out, this dazzling new hairstyle of contradictions would prove to be telling of her entire style evolution throughout the year, which was both strawberry shortcake sweet and drop dead diva glam. And let us not forget (as if we could) that the exclamation point on her innocent to oh-so-intriguing transformation was her reprise as the headliner for the Victoria's Secret Fashion Show, during which she wore what could easily be classified as lingerie while taking her turn on the catwalk. Without a doubt, 2014 was the year that Swift became a true style star.

In addition to making every best-dressed list on the internet, Ms. Swift dropped what is arguably her most popular album to date, 1989, marking yet another seamless and wildly successful transition into new-age Taylor. Few artists have the ability to dominate the world of both country and pop music, yet the "Shake It Off" singer did just that. Also, this little thing happened where she was the first woman to replace herself as number one on the Billboard charts while taking on live music streaming giant Spotify without putting so much as a ding in the shiny armor that is her reputation. So yeah, Taylor Swift had a bang-up year with fashion and career evolutions that cemented her status as music mogul and style icon.

Really though, you can love her or hate her (except don't hate her because, why? And also, I think you're an alien if you do because it isn't humanly possible to feel the negative feels towards her), but you can't argue with her domination. Why would you want to? What we should want is for everything she did and all she stands for to transcend into 2015. For real haters, she landed herself on the shortlist for Time Magazine's Person of the Year, a grouping that included Vladimir Putin, the Ebola caregivers, the Ferguson protestors and Tim Cook, who became the first openly gay Forbes 500 CEO in 2014. Boom. Girl Power.

Yes, I do believe empowerment and flawless street style will do as goals for the new year. But, alas, how do we make that happen? Well, I bet Taylor Swift has big goals for 2015, too. After all, you don't achieve icon status by resting on your laurels. If I knew Taylor Swift as well as Selena Gomez knows her cupcake-baking buddy, I would say these are, or should be, her 10 fashion and beauty resolutions for the new year.

After receiving the most gushed over birthday gift this year from Lena Dunham, a pendant necklace featuring her beloved cat Meredith, I would guess Swift will look to acquire more cat-inspired accessories in the new year. Cat sweaters? Those are so 2014. Cat jewelry? Super fresh. Considering she has proclaimed this new bauble to be her most cherished possession, I predict she works to incorporate cats, specifically hers, into other accessories this year.

Taylor Swift had a monstrous style evolution this year that catapulted her into the fashion limelight. She became the go-to girl for an off-the-moment magazine cover and was every street style photographer and bloggers obsession. As my dad would say, she's like butter — on a roll. Atop Taylor Swift's fashion resolution list would likely be to use her momentum to continue the good girl to glam transformation she is in the midst of, because we all need a new look every couple years and she's running full speed ahead at a chic one. Taylor Swift, she's just like us.

If anyone worked the crop top in 2014 it was Taylor Swift and she pulled it off in an epic way every time. While she certainly wore her fair share of mid-riff baring apparel in a variety of ways over the year, we are just breaking the surface of a signature look. We can only hope that she will continue to explore an infinite number of crop top patterns, fabrics and pairings in the new year so we can copy them, and also officially say for certain that the crop top is to Taylor Swift what oversized sunglasses are to Anna Wintour.

While a rouge lippy would be nothing new for our up and coming style queen, she rocks it like no other. When you have a signature color, you stick with it. Taylor Swift will, no doubt, be making a lot of heads turn in 2015 with fresh style choices, but I think she will vow to stay loyal to her perfectly hued pout. You just have to ensure some things never change.

Sassy shoes were arguably the standout stars of Swift's 2014 street style (hard to say 10 times fast, but so true!). From perfect pink, sky high stilettos to the girliest of oxfords, her feet were fancy. Naturally, she will look to acquire the most covetable collection of shoes 2015 has to offer.

6. HAVE A HANDBAG NAMED AFTER HER

We all know the true mark of a style icon is a namesake bag and since there was rarely was a street style snap in which Taylor Swift wasn't clutching an enviable accessory, we know she has a penchant for them. It only makes sense that she would strive to be someone's handbag muse in the coming year. Move over Amal Clooney, induction into the handbag hall of fame is sure to be on Swift's 2015 bucket list.

Look, I don't know what Taylor Swift's personal agenda is for 2015 (please get back together with Harry Styles!) but she is definitely vowing to wear more lingerie in the new year after her smokin' hot debut at the VS Fashion Show. When you look that good in something how can you not vow to incorporate it into your wardrobe? Plus, good looking undergarments give you confidence, and we know she is all about girl power, no matter the source.

As evidenced by the aforementioned leggy lingerie debut, Taylor Swift is boasting ballet-toned gams. We know she has been hitting the studio with ballerina/model friend Karlie Kloss, but the whole world has recently started to realize that it's paying off in a major way. Already known to have an affinity for the short-shorts, Taylor will likely work a lot of leg this year. It's always good to resolve to work one of your best body parts.

9. HAVE FUN WITH FASHION

Swift spent 2014 climbing to the top of the fashion ladder, cementing her fashion icon status and basically being the best dressed list. She garnered serious red carpet cred and received praise for her street style game like, every time she stepped off an airplane or out of her new Tribeca apartment. So, what does one do when they are sitting pretty atop the fashion food chain? Take more chances, of course! This year, I think Taylor Swift will resolve to take a leap of fashion faith and shock us with some not so tried and true choices. After all, she had 21 costume changes in her "Blank Space" video, leading to a variety of outrageously dazzling ensembles. It looks like the fun has already begun.

Taylor cut off her locks this year, led her very own style evolution and already has a signature lip. So, what will she do this year to mix it up? I mean, we know she isn't one to sit idol for long. We've only ever known her with a flaxen-colored head of hair, so maybe 2015 will be the year she trades in her blonde for something darker. Whatever she decides, we know she is resolving to surprise us.

So you know how the Chinese Zodiac designates an animal for each year? For example, 2014 was the Year of the Horse. Well, all fashion astrology signs point to 2015 being a repeat of The Year of the Swift. Admittedly, I wasn't invited over to bake cupcakes and discuss resolutions for the new year, but I feel pretty confident Taylor Swift's fashion goals would center on the above. So, if you need a little inspiration for your own resolutions, take a cue from the girl that nobody can seem to get enough of.